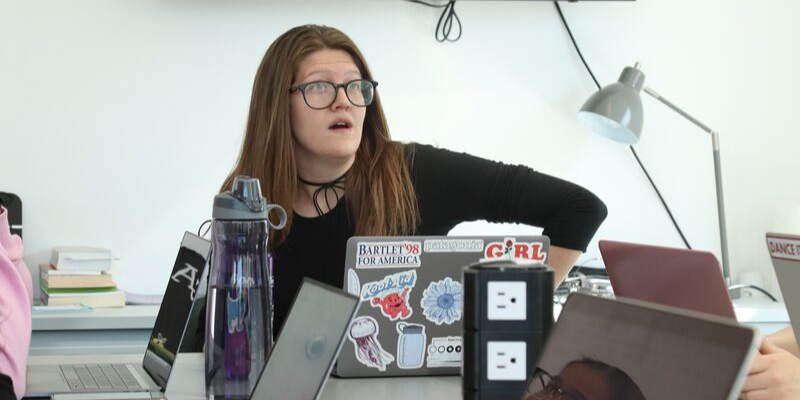 The EVVYs twice rejected Semple’s application to work in mid-level management roles for their 38th production, causing some current and former students to question the motive behind the policy and the neutrality of the executive treasurer.

A current student with direct knowledge of the executive treasurer’s personal interactions with the EVVYs recalled her stating that she wanted to defund the EVVYs in front of a room of people during the spring 2019 SGA elections. The individual requested to remain unnamed out of fear of retaliation for their comments.

“It’s very obvious the reason she doesn’t want to fund the EVVYs is because she holds a personal grudge against them,” the current student said in an interview with The Beacon. “If something were to happen to the funding of the EVVYs from Student Government directly as a result of [Semple], it would be tied to her personal feelings rather than any specific reason with the budget and anything like that.”

Despite some organizations expressing fear, Semple said she is not trying to hurt any specific group. Her job, she said, is to be a financial advocate for the undergraduate class. In regards to comments threatening to defund the EVVYs, Semple said she is working harder to be mindful of what she says.

“I say shit. I’m not a particularly political person,” she said. “I’m not as cool and calculated as previous SGA treasurers have been, and I should work harder to be mindful of what I say.”

Student Government Association officials criticized the controversial proposal over the past week and brought intense questioning during Tuesday’s Joint Session Meeting.  The proposal would cut vital funding from organizations such as the EVVYs, Musical Theater Society, the Emerson Green Gala, and Ribbons on the Runway.

The story of the hiring dispute and defunding comments emerges as The Financial Advisory Board plans to vote on the fee amendment Thursday during their weekly meeting from 3 to 4 p.m., after delaying it from the Sept. 19 meeting.

EVVYs Executive Technical Producer Leo Duch Clerici said that, if passed, the policy would hurt the organization and the production quality of the awards show. The loss of money would require the EVVYs to cut down on various parts of the program—whether that be things such as audio or broadcast equipment, he said.

Despite this, he doesn’t believe Semple’s policy is a direct attack against the EVVYs.

“There are a lot of organizations that are going to be affected by it, so I really don’t think this is a direct attack on the EVVYs,” he said in an interview with Beacon reporters. “We would just have to make really tough choices that I really don’t want to do. Especially because we have 300 students working on the EVVYs.”

Duch Clerici said he was unaware of complaints about Semple’s performance during EVVYs 37 and her experience with the subsequent hiring process.

Semple began working in the technical crew of the EVVYs 37th production in the spring 2018 semester after getting involved in the organization through a friend.

A former student with direct knowledge of Semple’s personal dealings with the EVVYs outlined interactions between the executive treasurer and the awards organization that they said further call into question her motivations as executive treasurer.

During the EVVYs Gala of April 2018, the former student said she irritated other crew members after attempting to help out with an issue during the production, recalling that Semple angered a majority of the crew of the EVVYs 37 award show. The former student emphasized that the actions were not fireable, but were rather personality issues that got in the way of production.

“By the end of the EVVYs, people weren’t really too happy with her,” the former student said. “She had kind of really irritated [the] assistant tech manager who was going to become the tech manager the next year.”

Semple applied for the position of tech manager for EVVYs 38 but was told that she did not have the required experience, and was rejected for the first time in fall 2018.

“She wasn’t very happy about that,” the former student said. “I think she kind of got the impression that [somebody] didn’t think she could do it. I don’t judge, but that’s what the qualifications are. They’re pretty objective.”

The current student said the EVVYs rejected Semple because there was a large application pool and the candidates, for the most part, met all of the qualifications necessary for the position. The executive producers for EVVYs 38 opened up the application process one more time during fall 2018.

Semple applied again and did not receive a position.

“I know she was kind of salty about that for a while,” the former student said. “I suspect maybe she had … gotten the impression from somebody else that she wouldn’t ever be hired for the position, and I think she felt that it was because of something else when really she was rejected based on merit.”

The former and current student both said they believe Semple holds a grudge against the EVVYs following her experience with the hiring process.

“[The proposed policy] definitely felt like it was targeted towards the EVVYs,” the former student said. “Anybody who works even remotely close to the EVVYs knows that a good percentage of their funding comes from ticket sales and submission fees.”

The proposal would bar organizations that either rely on a yearly budget or appeal from SGA from charging students to pay a fee to participate or submit content to their events. The policy does not bar organizations from collecting charitable donations at their event on behalf of an outside organization or collect funds that would go into their institutional advancement fund.

Fraternity and sorority life organizations do not receive yearly budgets from SGA but can appeal for extra money. The organizations that choose to appeal cannot charge admission fees.

During the Tuesday meeting, Duch Clerici said the EVVYs would have to increase its yearly appeal to approximately $55,000—an uptick of $25,000. It is unclear if other organizations affected by the policy would also increase their appeal requests.

With the appeals account resting at roughly $225,000, Semple could not guarantee full compensation for organizations losing funding.

Deputy Enterprise Editor Belen Dumont did not edit this article due to a conflict of interest.