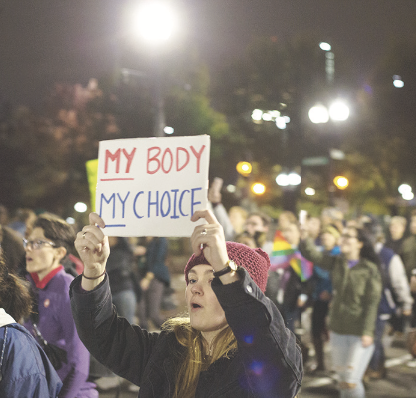 America has spoken, but a cloud of confusion cast its shadow at Emerson the day after Donald Trump became President-elect.

Somber stares replaced the busy hum of Boylston and Tremont Streets. Tears welled in the eyes of students and professors. Many didn’t come to class. Trump’s unpredicted triumph over Democratic nominee Hillary Clinton blindsided many at our classically and staunchly liberal institution.

President Pelton addressed this unrest in an email to the Emerson community Wednesday afternoon. He promoted self-care and civic action, and his acknowledgments gave credence to students’ anxieties.

“By the time she officially conceded, it was a cold acceptance of it. I think the biggest shock came around 11 p.m. at night when everything was at a stand still and everyone was slowly realizing that it was going where it was going. I was very upset about it. I was very scared. A lot of my friends are LGBTQ, and people of color, and I was very scared for them. A lot of them were visibly breaking down throughout the night. A lot of tears were shed. And this is just very scary times, and I am afraid for them.”

“Honestly, it didn’t quite hit until after I woke up the next day and everyone was lamenting on Facebook. Everyone on the street is dead silent. No one is smiling, no one is laughing. Everyone is crying. I started crying. It just didn’t seem real.”

“I’ve tried not to bring [the election] up today. It’s kind of a sensitive topic. I know how people are feeling scared, and unsafe, which they shouldn’t. I don’t believe that Donald Trump is going to do the things that they think he’s going to do … People on Facebook were calling Trump supporters xenophobic and all this … [Supporting Trump] has nothing to do with racism. [Trump supporters] want someone to stand up for their jobs, stand up for their families, and try to bring prosperity back to America.”

“To me it seems like there is such a lack of communication between rural America and metropolitan America. This speaks a lot about the education systems because I think that if you believe the stuff that Trump is saying, it just goes to show your ignorance. I’ve always been really optimistic and I truly do believe in people, but never so little as today. It’s making everything I hold dear to my heart come into question. I feel really hopeless.”

“We have a responsibility and a duty to right what’s wrong … Not all of us are going to become documentarians or journalists or deal with nonfiction. But even those that deal in fiction, there is truth in those stories. The stories we tell shape our culture.”