Students reflect on crisis in Venezuela at #TrendingTopic event 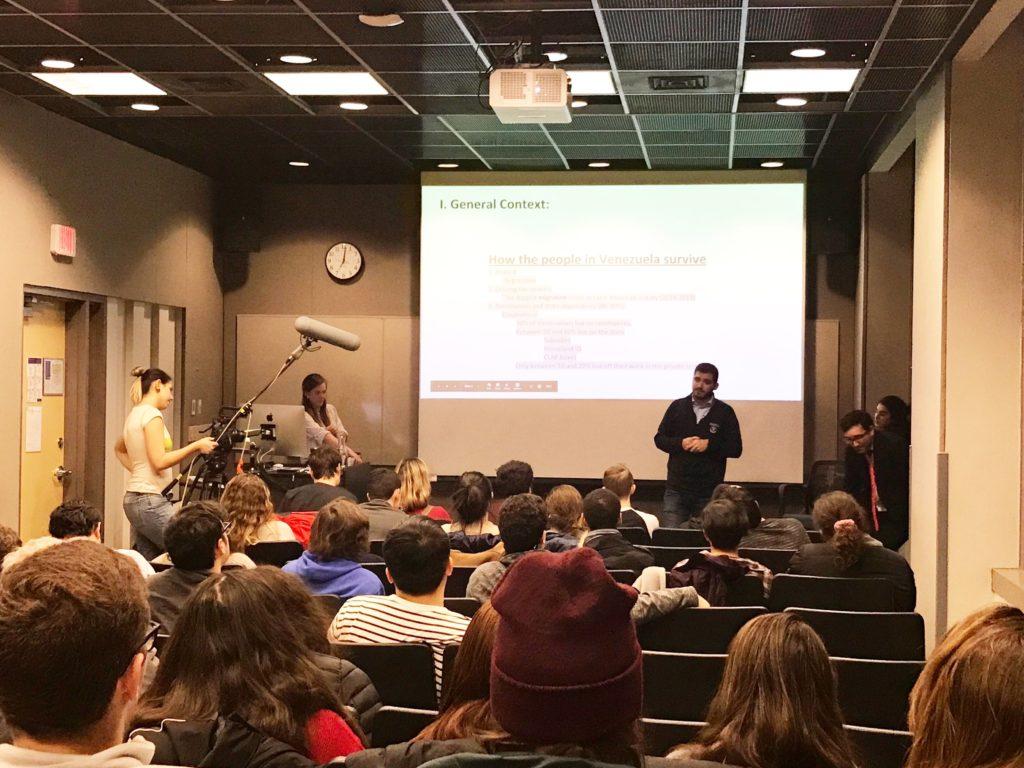 By Stefania Lugli and Jacob Seitz

Junior Ana Salas arrived in the U.S. from Caracas, Venezuela when she was 18 years old to pursue communication studies at Emerson. Her mother pushed her to study abroad shortly after President Hugo Chavez was elected in 1998—predicting an eventual crisis in Venezuela.

“My mom said [to my dad], ‘Your kids are not staying here,’” Salas said. “She said that [Chavez] is a president that incites hate and fear. It reminded her of Cuba.”

Salas can afford to live miles away from her home country’s democratic and economic upheaval due to her father paying tuition out of his savings from owning a sanitary waste landfill in Caracas.

“I’m privileged to be here. Everybody’s leaving. All my friends are leaving. There’s nothing left much [in Venezuela],” Salas said.

Salas joined fifty students in the Walker building on Feb. 7 for “Venezuela #TrendingTopic,” an event advertised as a conversation about the Venezuelan crisis.

AMIGOs and the Center for Global Communication organized the public talk in response to the recent turmoil in the country. The event featured human rights attorneys Nizar El Fakih and Julio Henriquez as keynote speakers.

On Jan. 23, Juan Guaidó, the president of Venezuela’s National Assembly—a governmental body equivalent to U.S. congress—took an oath to serve as interim president. He did so to abide by Article 233 of the Venezuelan constitution, which gives presidential power to the National Assembly leader if the prior election was deemed illegitimate, and requires Guaidó to call for new elections within 30 days.

Henriquez works full-time as an immigration attorney in Boston and is the international coordinator for Foro Penal, a human rights organization based in Venezuela. He said in an interview that he feels a duty to educate people on the crisis in the country.

“I think it is my personal and professional responsibility to try to explain what is happening in Venezuela from my point of view,” Henriquez said.

He detailed stories of human rights violations, such as judges who faced sexual assault and torture while incarcerated for defying government wishes.

“[Government officials] are perfectly aware that what they’re doing is grotesque,” Henriquez said. “Prosecutors would apologize after throwing [defendants] into jail.”

The democratic crisis began when President Nicolas Maduro was sworn in for a second term on Jan. 10 this year, following an election claimed rigged by the international community and organized by a parallel legislature unconstitutionally appointed by Maduro, according to BBC News.

Multiple news sources cite that Venezuela used to be Latin America’s richest country due to its location over some of the world’s largest oil reserves. Now, the once-prosperous country struggles with dwindling food and medical supplies, skyrocketing inflation, and tens of thousands of protestors rallying across the country every week.

“My dad hates going to [the protests]. He gets so scared. He’s like, ‘If I’m not home and something happens, who’s going to help?’” Salas said, referring to her father’s concern at his family potentially losing him.

Salas said her mother, on the other hand, attends every protest she can.

“[My mother] knows how to take care of herself. It’s terrifying. We give her a curfew. We tell her, ‘Tell us when you’re there, tell us when you come back,’” Salas said.

Salas said she participated in multiple protests in her home country, most recently in 2016, before she moved to the U.S. Salas continues to advocate for Venezuela by attending local rallies in Boston.

Fakih, from Valencia, the industrial capital of Venezuela, and the other speaker at the event, doubles as a human rights attorney and a professor at Harvard University.

Fakih presented multiple slides filled with statistics and data depicting the democratic crisis in the South American country through numbers. He informed the audience on the country’s 1.3 million percent inflation rate, and how many protests take over the streets—about 27 demonstrations per day in 2017.

“The Venezuelan people are fighting every day,” Fakih said at the event. “They are not passively accepting anything.”

Fakih said that in 2017, 5,500 detentions occurred and 165 people were killed in response to street demonstrations. One thousand protestors have been detained since Juan Guaidó became interim president.

Fakih said he called Guaidó shortly after his announcement.

Henriquez also spoke about the international community’s sudden attention on Venezuela’s crisis. He said crimes against humanity occur within the country, and the International Criminal Court began a preliminary examination into the crimes.

“This has been evolving in a spiral descent with no end,” Henriquez said during the event.

Graduate student Anna Cappellin, one of the organizers of the event, said she remains hopeful for the future of Venezuela—but that any solutions must be long-term.

“We do believe we’re going in the right direction,” Cappellin said, “We start by stabilizing the economy, fixing the humanitarian crisis, offering food and education for all of the population. We will achieve that with international support.”

Henriquez also talked about issues facing any future democratic government in the state, such as the possibility of a rebel militia or pushback from Colombian guerilla forces along Venezuela’s southern border.

“The Venezuelan people have the ability to elect their own president, but we’ll then be looking at a different set of complex issues,” Henriquez said, “Those are issues to build on. I’m looking forward to having those issues.”

Salas, however, said she did not feel comforted about future progress in Venezuela by the discussion.