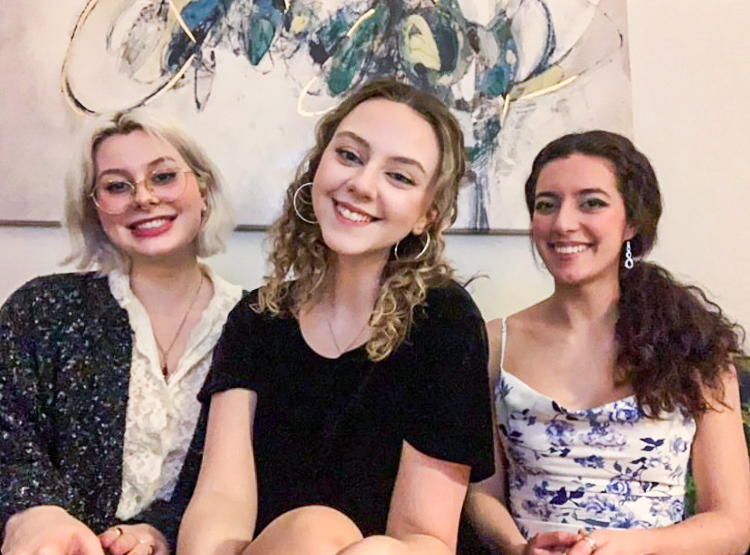 Founders of "Hidden Gems of Emerson"

Three students recently came together to create “Hidden Gems of Emerson,” an online human interest platform that aims to highlight fellow creative Emersonians. The group shares video interviews and articles about their endeavors, ranging from podcasts to poetry.

The Instagram account, run by sophomore journalism major Brynn O’Connor, launched in October. O’Connor and her two friends, sophomore Jenna Triest, another journalism major, and sophomore Molly Weinrib, a writing, literature, and publishing major, teamed up with one goal: to interview Emerson students and share their creative projects and inspirations with the community.

The trio talked about logistics for months before finalizing their ideas and creating the platform people see today.

“We were talking about it for a long time trying to figure out when to start and how we wanted it to be done,” Weinrib said. “There were a lot of ideas that were shot down and brought up.”

O’Connor said the group debated the name “Hidden Gems” for a while.

After the page was up and running, the team began their interview documenting series.

“We reached out to a few close friends and people we thought would have good stories for our first couple of interviews,” O’Connor said, “Our first interviewee was Wesley Days, and if you know him or watch his interview, he is a man of performance.”

Days, a sophomore journalism student, runs an EVVY award winning podcast called “The Dark Side.” During his interview with Hidden Gems, he credited hard work and perseverance for his success.

“The biggest thing for me is hard work because it has the ability to drive anything,” Days also said in his interview with The Beacon.

Hidden Gems encourages Emerson students to nominate their peers to share their stories through a submission form process linked in their Instagram bio.

“This is so we can get a feel for who we will be talking to instead of interviewing completely blindsided,” Triest said.

Another hidden gem the team interviewed is Will Percarpio, a friend of the founders. The sophomore WLP student from New York discussed his love for poetry.

“I’m a writer, a Pisces, and a WLP student,” Percarpio said. “I write to relieve any stress. I am someone who believes in creative expression of any kind to not only better yourself, but those around you.”

Hidden Gems chooses interviewees to get to know the Emerson community as a whole.

“We never specified whether it had to be students or not. We would even interview dining hall workers if they were willing to reach out,” Triest said.

The team interviews one person per week, and each team member has a different role throughout the process. O’Connor runs the social media, conducts the interviews, and writes the stories. Triest is in charge of the camerawork, videography, and editing. Weinrib creates all of the designs, including the logos, the website layout, as well as editing. This process allows the team to efficiently interview and write articles while maintaining a consistent schedule.

“Any time I’m not doing work for school, my mind is on Hidden Gems. I’m always thinking [about] what we need to do next or who we need to interview,” O’Connor said.

Hidden Gems of Emerson encourages students to reach out and get involved. The team’s instagram is @hiddengemsofemerson, where they post updates and upcoming opportunities.