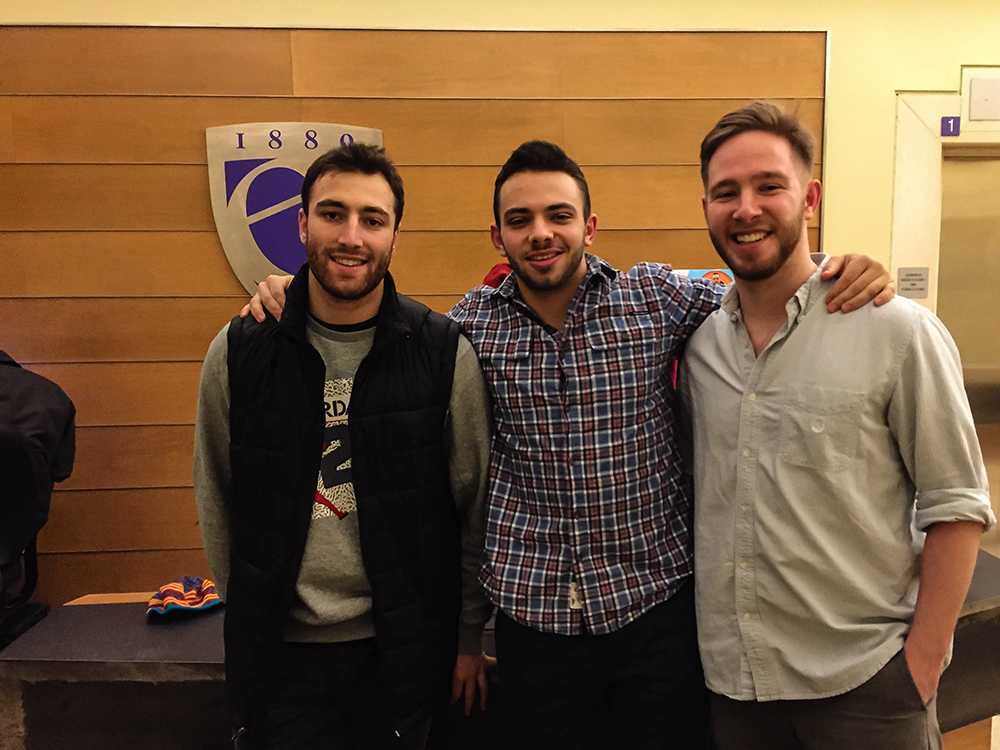 From a student’s frantic search for liquor during the blizzard to a professor’s rocky grasp of a classroom projector, Lion’s Tooth, a new parody news website, has been chronicling the college’s satirical headlines since December.

Lion’s Tooth, modeled after the popular satire site The Onion, aims to include a mix of timely and evergreen stories, according to its three student co-creators, and has published over 40 articles since its launch. Though the humor is rooted in the oddities of the Emerson experience, they said their goal is not advocacy—but simply to bring some shared happiness to campus.

“Lion’s Tooth pokes fun at the quirks of Emerson students and culture, but in a tasteful manner,” said junior Charlie Greenwald, one of the site’s co-creators and a communication studies major.

Among the titles are Onion-style news headlines like “Emerson Student Makes Facebook Status About Golden Globes” and “ECwireless-5GHz Has Declared War Against ECwireless.” Some articles also include made-up statistics and interviews.

An article titled “Emerson Dining Hall’s Rats Enjoying Much-Needed Time Off” includes the imagined perspective of a rat named Jimmy Carmichael, writing, “growing discrimination and xenophobic calls for removal from the student body have greatly affected the collective psyche of the rodent community.”

Kelner said writing for Lion’s Tooth has opened his eyes to the eccentric experiences of daily life at Emerson.

“That entire article was verbatim besides the last little spin—but that exact same situation happened in the class that I was in,” said Kelner.

They said their satire is far-reaching, and they are not above making fun of themselves.

“We’re all included in at least one, if not multiple, of the types of people we parody,” said Greenwald.

The group met while working for WEBN and Emerson Channel Sports, the student-run media organizations.

Greenwald, Kelner, and senior Jeremy Vandroff, the third co-creator, said they spent about two years discussing the blog before actually putting it into action. Kelner credited Greenwald with having the original idea for Lion’s Tooth, but said the self-proclaimed best friends have enjoyed collaborating thus far.

“It’s a great outlet for me to express my sense of humor,” said Kelner, “and it made me want to tap even further into my comedic mind.”

None of the three satirists is currently involved in a humor group on campus, said Greenwald, since the comedy scene is so competitive.

“That’s part of the reason we want to do an online satire thing,” said Greenwald, “because people have a lot of funny ideas but get rejected from the comedy troupes.”

They agree satire is a favorable genre to tackle because, unlike other kinds of comedy, readers can be cued into the joke instantly. Greenwald said this is essential to their goal of being funny, but also non-offensive. They all agreed that delicately toeing the line between comedy and insult is a major goal for Lion’s Tooth.

“When you use satire, kind of from the get-go, your reader is in on the joke,” said Vandroff, a communication studies major. “It’s also important to use the genre of satire to bring the attention of the Emerson community to [campus issues]. We all agree that the DH could be better.”

And while they do appreciate the issue-raising platform on occasion, widespread change is not necessarily their intention, according to Vandroff.

The Lion’s Tooth Facebook page has nearly doubled in likes in the last month, according to Greenwald, a spike in attention that started earlier this month. Freshman Sam Rivman said he found out about Lion’s Tooth from a friend a few weeks ago.

“It’s hilarious how relatable and accurate the articles are to Emerson culture,” said Rivman. “I don’t know any of the three writers, but they seem like witty guys.”

If occasional self-deprecation is the price for quality laughs from the Emerson community, Greenwald, Kelner, and Vandroff will certainly pay. In the end, they are all about bringing what Vandroff called “shared moments of laughter” to Emerson students on a larger scale.

“I hope [Lion’s Tooth] can bring happiness and laughter to people’s days at Emerson,” said Greenwald, “and make them just glad to be part of the crazy culture that is this school.”