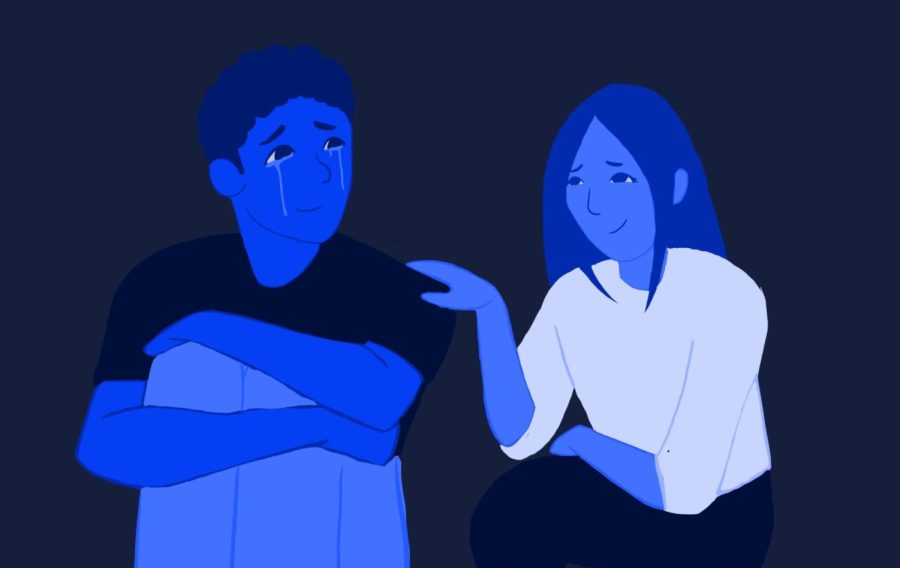 As we reflect on this past suicide prevention month, it’s important to remember the message of September throughout the year.

Whether you know someone who is struggling, see someone who appears broken, or if you are the broken one—none of us are alone. It may feel like there’s no way out, it may feel like no one really cares, but there are always people out there looking to help, listen, and even share their own experiences.

The stories of Jen Van Pelt, a senior VMA major, and an Emerson student who chose to speak anonymously, share the perspectives on what it’s like to feel helpless and lost. Despite their constant battles with their mental health, love and support have guided Van Pelt and Ryann* into a future of light—one filled with healing, hope, and opportunity.

Their stories are also a call to action, expressing the need for an institution based on understanding and respect— in other words, a college that does not put the desire for money over the needs of its students.

The lessons from these two stories are key elements to gaining resources and help. Overcoming mental illness and truly finding a balance is about getting back up, and trusting your resources to catch you, even when dwelling in uncertainty.
Anonymous (Ryann) (they/them) :
Ryann* first began therapy their sophomore year of high school, when they were diagnosed with anxiety, depression, and adjustment disorder. Yet, life felt unexpectedly normal when it came time to transition into their first year of college.

“I didn’t continue therapy throughout freshman year of college,” they said. “I was doing well with adjusting to school, which was kind of surprising.”

This stable period quickly shifted when the pandemic arrived.

“Once I left school and we all went into quarantine and lockdown, that was when my anxiety and depression began to kick in again,” Ryann said.

Talking to anyone about these internalized battles never really seemed possible for Ryann, so they continued to bottle their emotions.

“I felt really alone because I used to really struggle with opening up to people and talking about everything surrounding my mental health in general,” they said. “Even though my sister was my best friend, I just couldn’t get myself to talk to her about it because it was so uncomfortable for me. My parents are also super understanding people, but that was not a conversation I ever wanted to have. It wasn’t something I felt comfortable sharing with any of them.”

Long-term suppression ignited a fire of loneliness. This eventually led to what felt like a last resort.

“Over quarantine, I did have an attempt,” Ryann said. “After that I was in a very tough place and it took a long time to work through it. That’s why I continued therapy, which really helped.”

Coming back to school in the fall of 2020 after months of isolation and adversity was not easy.

“It was very hard coming back to school after [the attempt] because there were parts of it that were very physical and noticeable and I didn’t like that,” Ryann said. “I didn’t want others to notice [the physical marks] because I was still at that point where I was in denial. That’s where my anxiety started to get really bad, and it was really hurting my school and friendships.”

Ryann decided a viable solution to all of this was applying to live off campus in order to balance their lifestyle and have more control over their space and environment. After initially applying through the lottery, Ryann was denied, which led them to reapply through Student Accessibility Services (SAS).

“It was a really awful experience that went on for a solid 2 months,” they said. “I originally had my therapist write my note with all my diagnosis and treatment and then I went through an interview process. After the interview, the person from SAS was basically like ‘I don’t think that your documentation properly represents your case,’ because I had gotten a lot more in depth with her about the attempt and the medication.

“After that I went back and had my therapist write out everything in more detail,” they continued. “We waited, and I was denied again. SAS said that my case wasn’t enough for them to grant me off campus.”

As SAS went over the case in a meeting, a representative pointed out Ryann’s adjustment disorder, and nothing else, stating that it wasn’t enough to get off campus.

“Meanwhile, my note included my five years of therapy, plus my anxiety and depression,” Ryann said. “I was very open during the interview about my attempt, and obviously that’s not a comfortable thing to do. That was the first time I had been open about it in a while. It was really hard to tell someone all of that personal information, and then have them be like ‘ok well that’s not serious enough.’”

The entire process made Ryann question why Emerson wanted to keep them on campus, eventually leading them to feel like the college didn’t have their best interests at heart.

“It just shows that all they care about is money,” they said. “Just after that whole situation, I didn’t know if this was even an institute that I wanted to attend.”

Ryann’s family was what really provided them with the resources, support, and motivation to continue moving forward.

“I look back and realize how thankful I am. I would not have been able to get through everything if I didn’t have them.”
Jen Van Pelt (she/they), a senior Visual Media Arts student:
“It all came to the forefront during my sophomore year of high school,” Van Pelt said.

Throughout most of her life, Van Pelt grew up in an environment that rejected her queer sexuality. She was in Catholic school until eighth grade, which is when she began to question her sexuality, causing her to isolate herself.

Even after transitioning to a public high school her freshman year, that sense of isolation never seemed to disappear.

Van Pelt says that during her sophomore year, this seclusion intensified.

“I was playing competitive soccer, which can mess a girl up in so many ways, especially having my first crush on [my] soccer team,” Van Pelt said.

Over time, she became used to suppressing her sexuality and identity, which led her to seek out heteronormative relationships that she wasn’t actually interested in.

Meanwhile, Van Pelt continued to conceal her emotions, constantly hiding them from those around her. It was something she had never done before, and over time her suppression took a turn for the worse.

“I am a very expressive person in general,” Van Pelt said.  “But at the time, I didn’t even tell my best friend about being gay. Junior year it got worse, I felt most isolated at that point. I became truant and stopped going to school. That was when I first started experiencing depression. I became very quiet and pretty much turned off.”

The people around her didn’t seem to pay attention as they continued their day-to-day routines.

“I expected someone to notice, but no one did. My best friend was occupied [with] falling in love for the first time,” Van Pelt said.

Even when Van Pelt’s family found her a therapist, she still couldn’t get herself to talk about her sexuality.

“Junior year, I started talk therapy,” Van Pelt said. “I didn’t have a psychiatrist at the time. I had an out of pocket speech therapist that my insurance didn’t cover and I wouldn’t tell her anything or the truth at all. At the time, I hated myself for being gay and I didn’t want it to be true. I hardly ever admitted it to myself. I didn’t want to speak it into existence.”

At the end of her junior year of high school, Van Pelt met with a psychiatrist who diagnosed her with depression, anxiety, and a learning disability. Senior year, she began taking medications like mood stabilizers and antidepressants, which helped in the short term before transitioning  into college.

Van Pelt’s mother had always been her support system throughout high school, but moving across the country marked a new journey towards independence.

“College made it better because I was on my own,” Van Pelt said. “My mom wasn’t making me dinner anymore. I realized ‘oh shit, I need to feed myself. I need to do my laundry and take care of myself.’”

Being on her own also meant reaching out to new resources for help, like Emerson Counseling and Psychological Services.

“When I came to Emerson and went to ECAPS trying to get them to help me out, they told me ‘sorry, we don’t have any counselors available but we can outsource you to someone else in Boston,’” Van Pelt said. “With this outsourcing, I was sent to a psychiatrist at the end of freshman year. She was very close to Emerson, but it was super expensive and I couldn’t pay for it out of pocket.”

This bill ended up costing $400 for a one hour visit. Thus, the solution seemed pretty simple to Van Pelt—ECAPS should get more counselors.

“They don’t have many counselors, maybe like five,” Van Pelt said. “Five counselors aren’t enough to cater to over 2,000 students.”

With the help of her mom, Van Pelt eventually found her way to Student Care and Support—which works with partners on campus to help students struggling. Amanda Turnley, the director of SCS, guided Van Pelt through some of her most difficult periods at Emerson.

“They really take the initiative to help you,” Van Pelt said. “They will help you write an email to your professor telling them that you’ve been struggling, and help you find a balance.”

Van Pelt is thankful for the people in her life who didn’t look the other way. Trusting her resources has opened her up to communities beyond expectation and beyond the realm of that closed off girl she once was, walking through the halls with her head down.
Some advice to those struggling in the future:
“Since the start of Zoom, everything is literally at your fingertips,” Van Pelt said. “I do support groups every Wednesday at 11 p.m. You can find support if you look and ask for help, but it’s not okay to expect it to just come to you. It’s always okay to ask. Something will come out of it, whether it’s someone giving advice or just listening.”

“I started journaling, which I live by now,” Ryann said. “At the end of the day, I write down things I accomplished. I know it sounds stupid, but it is very hard to pick up on all of the things you do during the day, so it is really important to just sit down and list out all of the things because you’re like, ‘Wow, I actually did so much and I’m proud of myself.’ It’s so much easier to criticize yourself than be happy with yourself.”