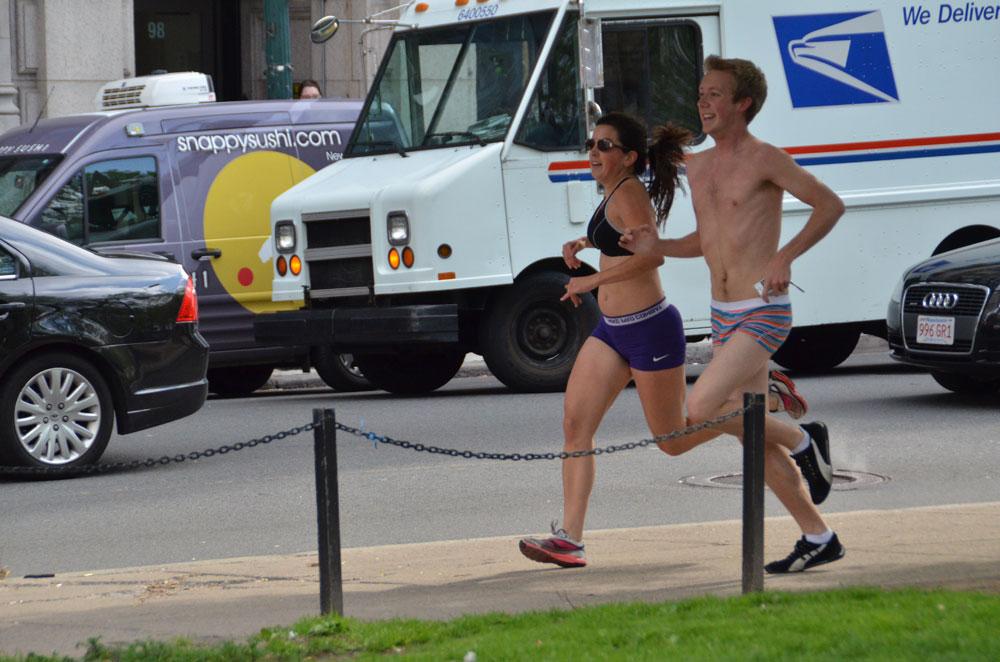 A group of nine students stripped down to neon-colored sports bras and boxers and bolted from the starting line of the second annual Nearly Naked Group Charity Run.

Emerson College and Wiggio, an interactive group project website, hosted the rambunctious charity run and clothing drive that allows students to undress, de-stress, and do good, according to marketing coordinator Shannon Lehotsky.

Students lugged bags of clothes to the Boylston T stop, which will be donated to the Big Brothers Big Sisters program in Massachusetts. The small group shed their everyday attire and dashed off in a mass one-mile “fun-run” around the perimeter of Boston Common.

DeRupe is the Boston-based startup’s account manager at EmComm and a Wiggio intern. He explained the challenging aspects of marketing the run.

“It is first and foremost a charity event,” said DeRupe. “We really tried to stay away from marketing this as college streaking because it really isn’t. It is tied to charity and is ‘nearly naked’ because we wanted to have a more fun aspect.”

Lehotsky said the event is held before finals so students can cool down with much-needed entertainment.

“People have a lot going on, they’re wrapping up the year,” said Lehotsky, who is also an Emerson alumna year? “Its a good way to clean out your closet and blow off some steam.”

Darryl Meyers, Wiggio’s business administrator, said the event was held at a couple of colleges last year and gradually expanded to 50 schools including Vanderbilt University and the University of Alabama. This is the second year that Wiggio is hosting the Nearly Naked Run at colleges, said Meyers.

“Nearly naked is just fun. It’s a little spin,” he said. “Running clothed isn’t as fun as running half-naked and it definitely gets some buzz.”

DeRupe said he felt there is a lack of community service among college students in general.

“It is really important to have events like this because, right now, it is difficult to do something for charity or for community service with such busy schedules,” said DeRupe. “It is important to incorporate something more fun that will benefit other people.”

One runner, Alex Lynn, said she was excited to spread word of the event and worked hard to collect clothes for the charity.

“It definitely attracts Emerson students, and I really wanted people to be aware,” said the freshmen marketing communication major. “People were just dropping bags of clothes outside my door which was really cool.”

Freshman Erin Connelly, a journalism major, said she thought the event was perfect for helping busy students get involved in a bigger way.

“It kind of brings people together for a cause,” said Connelly. “Its a good thing to do and its easy. Everyone has leftover clothes in their closet that they can just donate. Its pretty simple.”