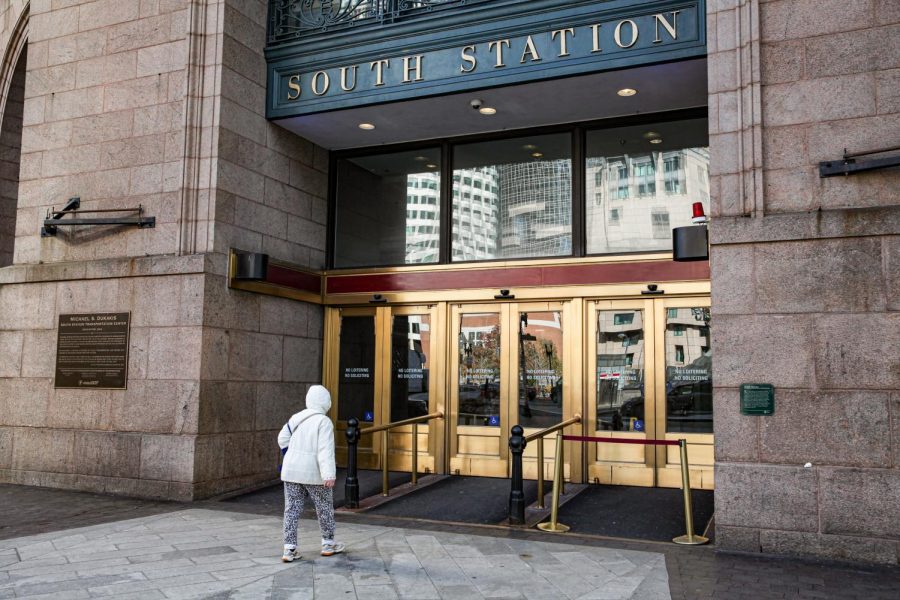 A person walks into South Station.

The end of Emerson’s in-person semester has arrived—and with it, a dangerous caveat.

In the coming week, Boston, now overwhelmed with new infections of coronavirus, will bear witness to a mass migration of college students. Tens of thousands will pour out of dorm rooms and off-campus apartments. They’ll scatter across the U.S. and join families and friends for Thanksgiving. Some will soon return to the city. Others will remain at home, possibly until the spring semester.

Either way, the pandemic is poised to accelerate.

Cases are shooting up in Massachusetts and nationwide, as a second wave of the pandemic grips the country. The U.S. is nearing 200,000 new infections each day.

Health experts and government officials, weary of indicators that the already bleak situation may worsen in the coming weeks and months, are sounding the alarm on Thanksgiving travel and gatherings.

Trips on public transportation during one of the busiest travel seasons, coupled with the possibility of young asymptomatic carriers bringing COVID-19 home, may accelerate the rapid pace at which the virus is already spreading, several experts told The Beacon.

“This could be the greatest risk from the semester,” Dr. Michael Siegel, a professor of community health sciences at Boston University said in an interview. “People may take [COVID-19] home with them and infect people who really are susceptible to severe complications.”

Over the past months, coronavirus cases in Massachusetts have taken a turn for the worse, nearing totals last seen at the virus’ peak in April. The majority of infections are appearing in younger groups, specifically those aged 20 to 29, according to the Massachusetts Department of Health.

That trend, while a potential sign this second wave may not bring about the same amount of death as the first, offers concerning implications for the possibility of unwitting spread of the virus.

Young people are far more likely to be asymptomatic after contracting COVID-19, according to the Centers for Disease Control and Prevention. That means without appropriate precautions, they could carry the virus onto airplanes or trains and into their communities—though the possibility is contingent on the presence of the virus where students are embarking from, Siegel said.

“It’s going to vary based on each campus,” he said. “The more cases you have, the more of an impact it’s going to have when students return back to their communities.”

At Emerson, COVID-19 infections have remained relatively low, though the college reported a sudden uptick of 12 new cases in two days on Wednesday, higher than any weekly total since the testing requirement began in August. As of publication, 25 students are in quarantine on campus, and two are in isolation. Administrators said Wednesday night that none of those infections were a result of community spread.

But regardless of on-campus infection rate, potential for spread varies based on a person’s contacts and how they travel, Seigel said.

“It can spread very quickly,” he said. “There are examples where a single person has resulted in the infection of hundreds of other people—a so-called super spreader. On the other hand, one person could spread it to one other person, and it could end at that point. It’s all about risk, and we don’t know the numbers, and we can’t control it.”

Siegel, who has been a vocal critic of Boston-area college reopenings, said local administrators are not doing enough to ensure students are COVID-free before embarking for home.

He said a quarantine requirement prior to students travelling home could have ensured students would be less likely to spread the virus to their communities. Experts believe it can take up to two weeks for the virus to incubate before a person would begin testing positive or showing symptoms.

A mandatory testing requirement before students leave, while not surefire as some tests can be false negatives or positive, could have added an additional layer of security. Students could also test negative soon after contracting the virus as the possibility of a false negative is high immediately following exposure, according to the Medical Institute at Massachusetts Institute of Technology.

“I would probably want to have a test before I went home,” Nancy Allen, a professor in the Marlboro Institute who has a degree in public health from Tufts University, said in an interview. “Even if it’s not foolproof, even though there’s still a potential for a false negative, it’s something.”

Massachusetts Gov. Charlie Baker joined six other state governors from the northeast Tuesday in urging colleges to provide students a COVID-19 test no more than 72 hours before leaving campus.

Emerson administrators missed the deadline to enforce a quarantine requirement and have not directly instructed students to receive a coronavirus test before traveling. Without those precautions, Siegel said community spread may be inevitable, and that administrators would be responsible for it.

Instead, college officials have ramped up messaging encouraging social distancing and mask-wearing. Assistant Vice President for Campus Life and “COVID Lead” Erik Muurisepp said students can choose to be tested outside of the weekly testing requirement as an extra measure of caution.

“We committed to having our testing program go through the very end,” he said in an interview Wednesday. “Students that wanted to get testing right up until Wednesday at noon, if they needed to, could do that. So they can safely travel home, and we don’t want the spread of the virus to go from Boston, anywhere else.”

But even tightened restrictions cannot ensure a student does not spread the virus to their community after taking public transportation, where travelers pack into closed spaces, often with poor ventilation systems, for extended periods of time.

Allen, who teaches a course on infectious disease, is telling her students to leave campus early if they can. Crowded public transport could be a breeding ground for the virus, she said.

“You’re traveling during one of the busiest travel weeks of the year, so you just have more people,” she said. “By the time we hit Thanksgiving, there’s a much higher likelihood that there will be somebody who has COVID on your transportation. So I say, if you have the option to leave early when it’s less crowded, do it.”

Few scientific studies related to spread on public transport have been conducted, Siegel said, but it is clear that the circumstances of such travel could easily allow for virus transmission. The likelihood of spread is directly correlated with the number of people on a vehicle and the duration of the trip, he said.

“A ride on the T for five minutes is probably not a huge risk factor,” he said. “But if you’re on a plane for six hours going across the country, that’s a different story. Because the more people, the greater the chances that there is someone who’s infected on that conveyance. And greater duration means the greater the amount of potential exposure.”

And the concern should a student contract the virus while travelling, he emphasized, is not for the student. It’s for the older, disabled, or immunocompromised people who they may infect, and are at an exponentially higher risk for developing serious or deadly virus complications.

While it is impossible to eliminate the chance of contracting the virus on public transport, travellers can still lower their risk by wearing a mask for their entire trip, Allen said.

But her biggest worry is students contracting COVID-19 at home, in communities that may reject safety restrictions. Fourteen U.S. states do not have statewide mask mandates.

“There’s the potential for students who have done a really good job here in Boston—socially distancing, wearing masks, spending time in rooms that have good ventilation—and they’re going to be going home to communities that may not be as willing to wear masks and socially distance,” she said.