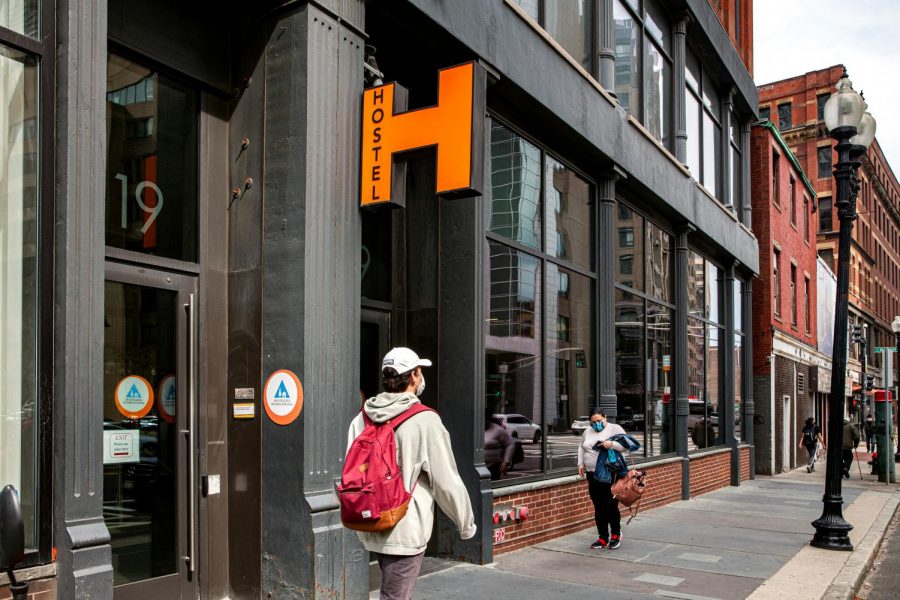 First-year Harry Robinson and his high school girlfriend of two years, who goes to Boston University, had grown used to seeing each other whenever they wanted.

When they moved into their respective dorm rooms, however, that freedom was quickly circumscribed.

Robinson, a business of creative enterprises major, and his girlfriend were separated by pandemic-era restrictions that prevented them from visiting each others’ residence halls. For a while, they spent the night at friends’ apartments to see each other privately, but eventually came up with other solutions.

“We started finding these cool little places—there’s the hostel in Chinatown,” he said. “It’s like 100 bucks a night, and so we would use that whenever we wanted to spend the night.”

Caught between stringent college policies and a desire for quality time, some students have turned to hotels or other temporary lodgings to see significant others or friends in a relatively safe environment during the pandemic. Many hotels, including the HI Boston Hostel on Stuart St. that Robinson stayed at, have put in place enhanced cleaning, contact tracing, and temperature check procedures to ensure guest safety.

The nightly costs—which have plummeted as a result of a massive drop in travel—has also made booking rooms a somewhat financially viable option even for thrifty college students. The average daily rate of a hotel room in November 2020 dropped about 28 percent from the same time period the year before, according to Statista, which provides market and consumer data.

Robinson estimates he and his girlfriend have stayed at the hostel about 10 times in total since the beginning of the academic year.

“We’ve gone back and forth on it—‘You would pay this weekend and then I’ll pay the next time,’” he said. “But it definitely adds up.”

For the spring semester, the college enacted an overnight travel policy, asking students refrain from traveling away from their on or off-campus residence overnight unless they’re going to the off-campus residence of another Emerson student. When students travel outside of these parameters, they must fill out an online form declaring their intent to travel.

If students are found in violation of these policies, they can face a range of sanctions, including penalties as harsh as removal from the college.

The policy arose after college officials saw a correlation between those who traveled away from their residence overnight and those who received positive COVID-19 tests. Upon returning, students are mandated to quarantine until receiving a negative test.

“As long as you’re responsible, and you realize that you’re not spending every single dollar that you have, I think it’s worth it—I mean, it’s kind of necessary,” Robinson said. “My girlfriend and I have been dating for two years now, and so we’re used to being able to just kind of hang out with each other and not have to stay outside or go to a restaurant to hang out.”

Robinson said he understands why the restrictions are in place, but finds they can be frustrating at times.

“I’m a Type One diabetic, so I appreciate the rules that were put in place—I completely understand them for parties,” he said. “But it is kind of inconvenient in some ways.”

Another Emerson student, a visual and media arts junior who requested to remain nameless, said he booked a bargain price hotel room at The Moxy on Tremont St last semester. The hotel’s rates ran between $200 to $400 when it opened in 2019, according to Boston Business Journal, but this student said he paid less than $100 for a night at the swanky hotel room he shared with his girlfriend, who he was also spending three days a week with at work.

“I don’t know if it was necessarily the right or smart thing to do,” he said. “But it was someone I had seen weekly. So I wasn’t worried about spreading COVID, because I wasn’t expanding my circle.”

For others, time away from residence halls to spend time with friends meant a farther trek. One junior acting major, who also requested anonymity, said she went to a friend’s cabin in the Berkshires in Western Massachusetts with four friends on Nov. 13 to get away from the city—an urge, she said, partly precipitated by the state of the pandemic.

“It’s really crowded here and can be anxiety-inducing,” she said. “So we wanted to get a break from all that.”

Facing then-freezing temperatures and a packed urban area, the isolated cabin seemed like an ideal escape, she said. In Hampshire County, where the cabin is located, there were 1,815 cumulative confirmed cases on the day the student arrived at the cabin, according to the Massachusetts Department of Public Health. In Suffolk County, where Emerson is located, there were 32,188.

“These people were in my bubble,” she said. “We just wanted to get away for a weekend, and obviously we all made sure that we were getting tested regularly and stuff like that before we went.”

This student said she knows others who sneak people into their own residence halls and find other work arounds to spend illicit time together. She added this sort of behavior in response to well-meaning but “unprecedented” college policy was “bound to happen.”

“Everyone here is a college student, and when people have so many restrictions placed on them, they’re bound to act out in different ways,” she said. “It’s very clear that students are suffering from the isolation, and it doesn’t seem like the college is doing much in response to that.”

The respite from the dense city and a chance to be in nature was restorative, she said, and proved a pandemic-friendly setting.

“There was just so much space around us,” she said. “We weren’t really interacting with anyone else except each other.”