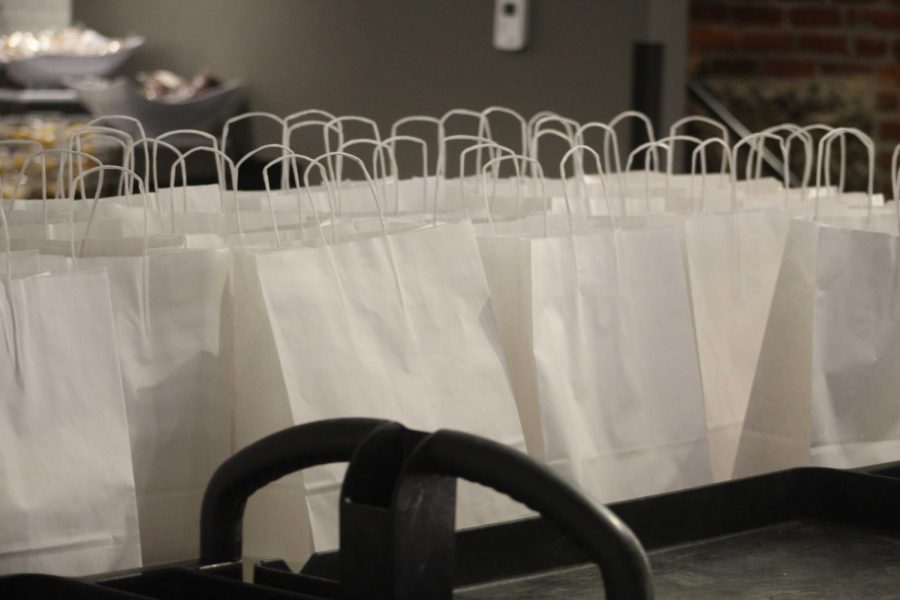 Bags of food in the Dining Center waiting to be delivered to quarantined and isolated students.

With COVID-19 cases on campus reaching their highest levels since the outbreak of the pandemic, a high volume of students have been admitted into Emerson’s on-campus isolation. For some, the college’s communication and isolation protocols have only complicated the situation.

Since Jan. 3, dozens of on-campus students have entered quarantine or isolation. Following new—and controversial—guidance from the Centers for Disease Control and Prevention, the college implemented a five-day isolation period, after which asymptomatic students may be released. However, with COVID-19 disrupting campus life, students in isolation reported communication issues with the college regarding the protocol after testing positive.

Sofia Attaway, a first-year writing, literature and publishing major tested positive on Jan. 9 but didn’t receive instructions on what to do when she got her result back the next day.

“I actually started calling [the Center for Health and Wellness],” said Attaway. “They didn’t call me for maybe like an hour after I got my results back.”

When she reached a CHW staffer, they said they had no instructions available for her and would call her back, prompting her to panic.

Attaway said she then called the Resident Assistant on duty in the Little Building who directed her to “contact trace” by notifying people she saw recently that she tested positive. These instructions were later confirmed by the Housing and Residential Education Department when they emailed her about moving into an isolation suite.

Although students are usually given 90 minutes for the move-in process, Attaway told the HRE staffer on the phone that she would do it in 10 minutes, given that the process had already been delayed.

“There’s not a set timeline—if there are multiple students testing positive at once, it may take some time to reach all of the students and arrange for their move,” HRE Director Christie Anglade said in email correspondence to The Beacon.

Other students have reported straightforward directions, but a stressful move-in process.

“[The school] was clear,” said Nue Galato Marcos Faltamo, a junior creative writing major. “It was just a lot to ask.”

Faltamo described the isolation experience as generally “numb” because of a sense of crampedness and lack of privacy when sharing a unit with a roommate.

Both Attaway and Faltamo stated that some of the obstacles they faced in isolation were due to insufficient supplies, like not being provided soap in the bathroom or receiving enough water.

Anglade clarified this, saying, “bar hand-soap is provided in an isolation bag” but many students don’t realize that the soap is in the bag.

In terms of water, Attaway expressed that she would have preferred to receive more bottles.

“We only got like one bottle of water, maybe two bottles of water a day, and that sucked,” Attaway said. “Especially when there were some people that were feeling kind of sick and you need liquids to recover.”

Anglade noted that students were encouraged to refill the water bottles in the sink “as needed.”

Faltamo also said there was one instance where his food had been mixed-up, despite having informed HRE about his dietary restrictions.

“I have a dietary restriction and they switched up the labels on the bags that they give to me and my roommate,” he said. “I actually picked the bag with food that I literally couldn’t eat.” The meal he was assigned contained pork, which Faltamo does not eat.

Maggie Lu, a junior writing, literature and publishing major, arrived on campus early for her resident’s assistant duties and tested positive Jan. 3. She, like Faltamo, thought the school’s directions for isolation were easy to understand.

Yet, at least one student, a first-year visual and media arts major who requested anonymity, described a dire situation over winter break brought on by the school’s communication.

After testing positive on Dec. 14, the student described the set of instructions received over the phone and through email as “confusing” and “contradictory.”

Once they were situated in the Emerson Colonial Building, the student said they experienced vomiting and fatigue, which impacted their ability to take care of themselves—a reaction worsened by the isolation meals delivered daily.

In the beginning, school officials contacted the student for contact tracing and temperature updates, but said that outreach slowly waned as time went on.

“By the end when I started to get really sick, no one was really talking to me and asking me if I was okay,” they said.

The first-year student ultimately opted to arrange a move with HRE to an isolation hotel in the city where their parent could oversee the rest of the isolation period.

The student said in retrospect they would have preferred more active outreach. “I really would have appreciated a standby nurse or someone just to call every single day like ‘Hey, how are you feeling? How are you doing?’”

Students are told to contact the CHW for a telehealth appointment or, if needed, ECPD for emergency transportation to a hospital.