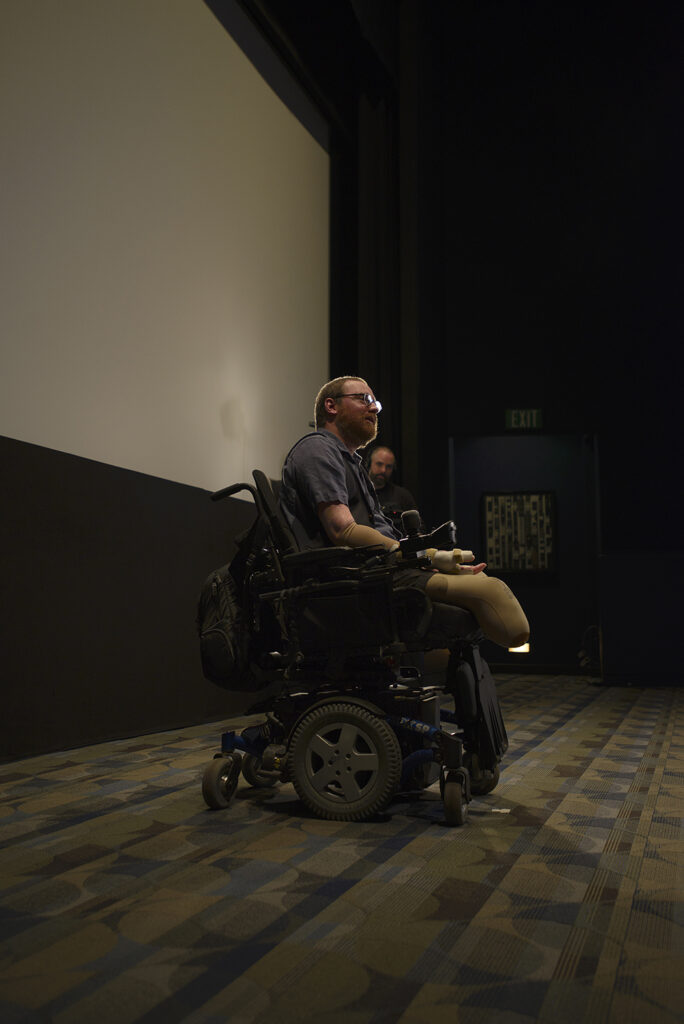 After teaching two classes in his new gig at Montana State University, Will Lautzenheiser checked himself into a hospital to treat what he thought was a leg cramp. But his situation turned out to be much more serious. His doctors soon realized that he was septic due to a severe streptococcal infection, and they informed Lautzenheiser that all four of his limbs had to be amputated.

On April 21, Emerson’s Bright Lights series screened Stumped, a 10-minute documentary about Lautzenheiser, in the Bright Family Screening Room to around 35 people. It was also shown on campus last semester as part of the ReelAbilities Film Festival. The 2014 short covered his illness, his rehabilitation, and his hopes for the future. The short was directed by Robin Berghaus, who met Lautzenheiser at Boston University.

The film provides a look into Lautzenheiser’s disease and recovery process, highlighting the struggles that he had to deal with every day and how he used comedy as a coping mechanism. It primarily focuses on Lautzenheiser simply living his life; in the movie, he takes a shower, brushes his teeth, and feeds himself with his prosthetic arm. The short includes pictures of his body pre-amputation, his limbs darkened and deteriorated. The film ends with Lautzenheiser performing a stand-up routine in front of a live audience.

After production on Stumped wrapped, Lautzenheiser received a call from one of his doctors at Brigham & Women’s Hospital in Boston telling him that he could receive a double arm transplant from an organ donor who had recently died. In October 2014, he successfully underwent the experimental transplantation.

“I don’t think it’s a joke, this donation,” said Lautzenheiser. “This gift is huge, and transformative, and restorative, just hugely. But you know, I put my fingers in my mouth and then I think, ‘My God! I wonder where they’ve been.’ I really don’t know where my hands have been.”

Wearing a blue button-down shirt and bandages over his new arms, the bearded Lautzenheiser introduced himself to the audience in the Bright Family Screening Room. In a discussion after the screening, he said that he used to teach film at Boston University, his alma mater. Eventually, he decided that it was “high time” to leave, and got the Montana State University job in the fall of 2011. Soon after, he received his life-changing diagnosis.

“So I often think that there must have been a clause in my BU contract somewhere that if you try to leave here, we’ll take your arms and legs,” joked Lautzenheiser. “If that’s the case, what would have happened if I had come to Emerson?”

Lautzenheiser said he accepted his disability early on in his recovery process. He said that while many people are grief-stricken and just give up, he remained resilient. He is now a disability mentor; his job is to offer support to people going through what he went through.

“You can’t even waste time with questions like, ‘Why is this happening?’ and ‘How do these things happen to anyone?’ and ‘What is suffering?’” said Lautzenheiser. “You might as well get on with your life and figure out something else and move forward, because you can’t answer those questions.”

Lautzenheiser said that he was in the intensive care unit for five months and in-house rehabilitation for half a year. After that, he went to outpatient rehabilitation five days a week before his double-arm transplant.

Lautzenheiser made a point to thank the people who supported him. He said that many of his coworkers in Montana gave up their sick days to keep him on the payroll. His twin brother stayed by his side the whole time, and his nonagenarian parents helped him find a new apartment without stairs.

One of the biggest challenges in Lautzenheiser’s life was figuring out what else he can do for work. Because of his difficulty with the physical aspect of filmmaking, he had to turn to other creative outlets, such as comedy. He said that Berghaus “tricked him” into talking about his disability at Improv Boston, a comedy club in Cambridge.

“Those types of outlets have been absolutely wonderful,” said Lautzenheiser. “It’s not only therapeutic for me, but I also think that it helps an audience see that maybe if someone becomes disabled or whatever you’re going through in your life, it doesn’t mean, necessarily, the end of the world.”

When Lautzenheiser received the transplant in 2014, Berghaus said she decided to turn the 10-minute film into a feature-length motion picture, which she hopes to release in 2017.

“I mean, I think that Will is an incredible person,” said Berghaus at the post-screening discussion. “We have to go and tell this longer story that was really, truly incredible.”