Swift simplicity in Under Milk Wood 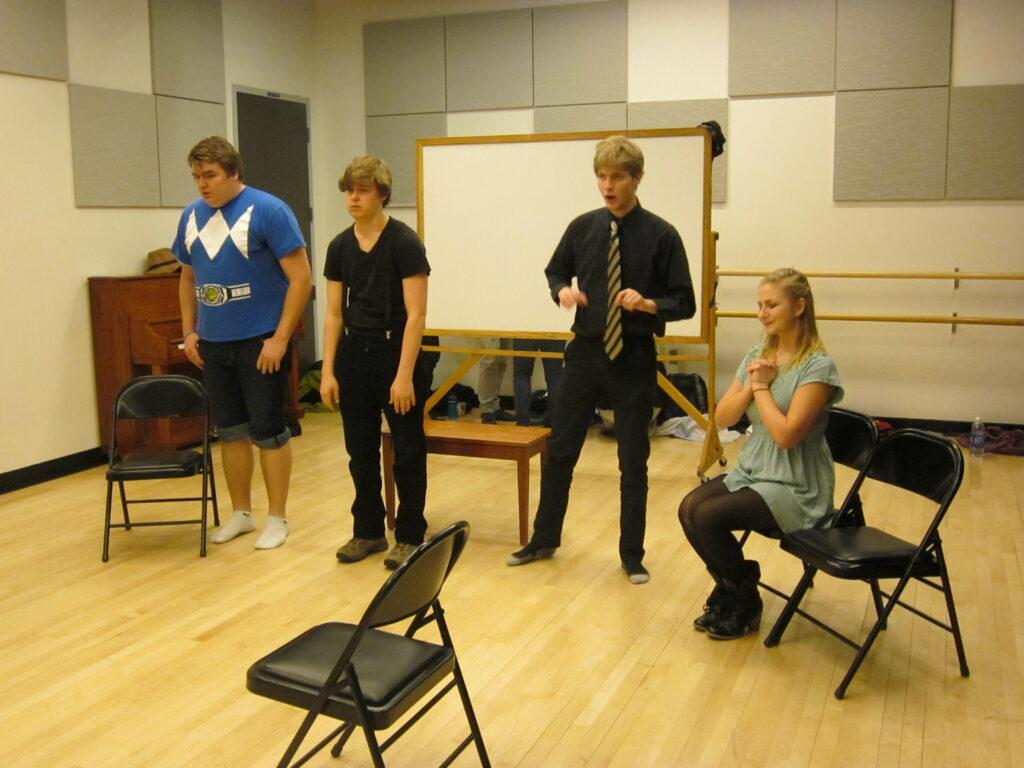 “We are not wholly bad or good, those who live our lives under Milk Wood,” said the Rev. Eli Jenkins in the lyrically beautiful radio-drama-turned-staged-reading Under Milk Wood.

Presented by Rareworks last Saturday and Sunday in the Piano Row Multipurpose Room, Under Milk Wood, written by famed poet Dylan Thomas, is about the denizens of a fictional Welsh town, Llareggub. Spelled backward, it reads “Bugger All,” indicating that there is absolutely nothing to do there.

Eight actors inhabited over 60 quirky townspeople who go about their daily lives. The play’s narrators, identified only as First Voice (Ben Cutler) and Second Voice (Lena Raff), give the audience glimpses into the seaside village at break-neck speed, quickly moving among the group of characters. There’s no linear storyline to Under Milk Wood  — it’s essentially several interwoven vignettes that paint a picture about life and love, taking place during one day and one night in a seaside village.

Director Morgan Lewi, a sophomore performing arts major, was drawn to the simple beauty of the play and said it was a perfect fit to bring to the Emerson theater scene.

“It shows the dreams and daily lives of these very strange characters,” said Lewi. “It shows that even in these odd fictional circumstances, human beings aren’t all that complicated and we all want the same things and love the same things.”

Among the cavalcade of characters are Captain Cat (Johnny Quinones), a blind sea captain haunted by memories and a lover of years past; Polly Garter (Cayla Komarow), a young woman whose garden has produced nothing but babies, thanks to boredom and poor gardening skills; and Gwennie (Cassie Samuels), a little girl who demands that boys either give her a kiss or a penny in a particularly humorous scene that had actors bringing out their inner five-year-old selves.

A modestly staged set with three simple boxes for sitting and bulbs illuminating the actors with earthy tones, kept the emphasis of Thomas’ play solely on the actors inhabiting the world of Milk Wood. The actors dressed in all black, with only a scarf here or a hat there to distinguish between the various characters. The simple distinguishing features, though, help the audience keep up with the range of characters.

Mannerisms and accents, too, draw the audience into Llarreggub and cause them to forget that a few people portray a bunch of characters. The actors deliver a defining limp or a specific speech pattern with such conviction that the play is never puzzling to watch.

“This isn’t a typical show,” said Quinones, the junior visual and media arts major who plays about a half-dozen characters in the show. “It’s a very voice-heavy show.” He said the variety of characters demanded that they craft especially distinct characteristics for each role.

Everything is presented with a quick-wit, which can be credited to the craft language of author Thomas.

Under Milk Wood’s serious themes like life and love are often contrasted by a humorous view, with character names as goofy and on-the-nose as, for example,  Organ Morgan, a man obsessed with his music.

“It really does point out a lot of humor in life,” said Lewi. “The audience realizes they aren’t so different from everyone else and that other people are feeling the same way they are.”

Corrections: Due to a reporting error, Morgan Lewi’s name was misspelled in a previous version of this article.