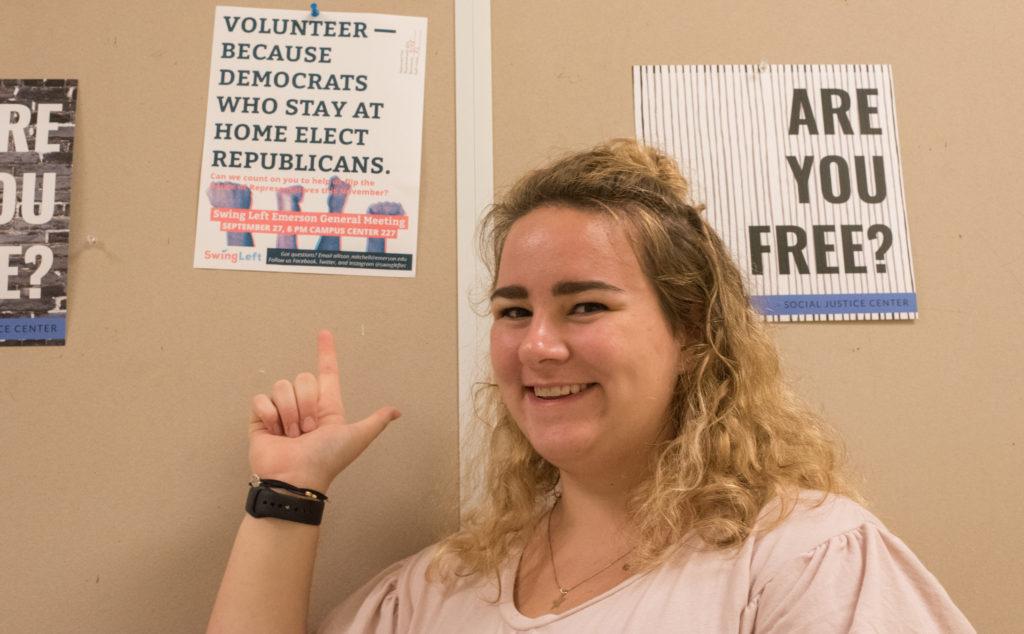 After seeing Hillary Clinton tweet about the Swing Left fellowship program, senior Allison Mitchell aimed to inspire Emerson students by bringing the program to campus for the November midterm elections.

Swing Left, a national grassroots movement, started after the 2016 presidential election. The volunteers act locally to replace Republican House seats with Democrats seats in the upcoming election on Nov. 6.

Since March, Mitchell, a political communications major, serves as the Swing Left Emerson lead organizer. Swing Left is not an SGA recognized organization, and there is no mandatory membership. The group’s purpose at Emerson, Mitchell said, is to make political engagement easier and more accessible for students.

On Thursday, Sept. 27 at 6:00 p.m. in the Campus Center 227, Swing Left Emerson will host its general information meeting to explain the mission of the movement and how to get involved.

Mitchell said people don’t realize the amount of activism and volunteering required to get a candidate elected.

Mitchell explained Swing Left Emerson aims to get students volunteering in swing districts to campaign for Democratic candidates. A swing district is an area that doesn’t consistently vote for a particular party.

On the weekend before Nov. 6, Mitchell plans to send a bus of Emerson students to New Hampshire to knock on potential voters’ doors and encourage them to vote.

“I think that students in general just don’t have the opportunities that a lot of older people do to get involved,” Mitchell said. “I think that by providing an easy way for students to talk to voters, to talk to legislators, to make a difference, people will really get involved.”

Swing Left will provide a bus for $5 per student, said Bodner. The money raised would potentially cover that fee, with any extra fundraising going to Pappas’ campaign. Bodner hopes to allow any interested students to go to New Hampshire for free through funds from their GoFundMe page.

A party needs 218 seats out of 435 to control the House of Representatives. With control of the House, the winning party can pass its own legislative agendas and block the opposite ones.

During the weeks up to election day, Swing Left Emerson will write potential voters letters to convince them to vote through phone banking—calling a list of potential voters. The Emerson branch also plans to put boxes around campus for professors and students to donate stamps, Bodner said.

“A lot of people really don’t like what’s going on, especially with the current administration and the government, but they don’t know how to help, and that’s a very overwhelming feeling,” Bodner said, “I feel like this and Swing Left in general is a great way to help.”

“I mean, we do have to swing left the presidency, [but] that hasn’t happened yet,” Graham said. “So if that’s a focus, I would be happy to work with that to try to help students get their absentee ballots or register in their districts.”