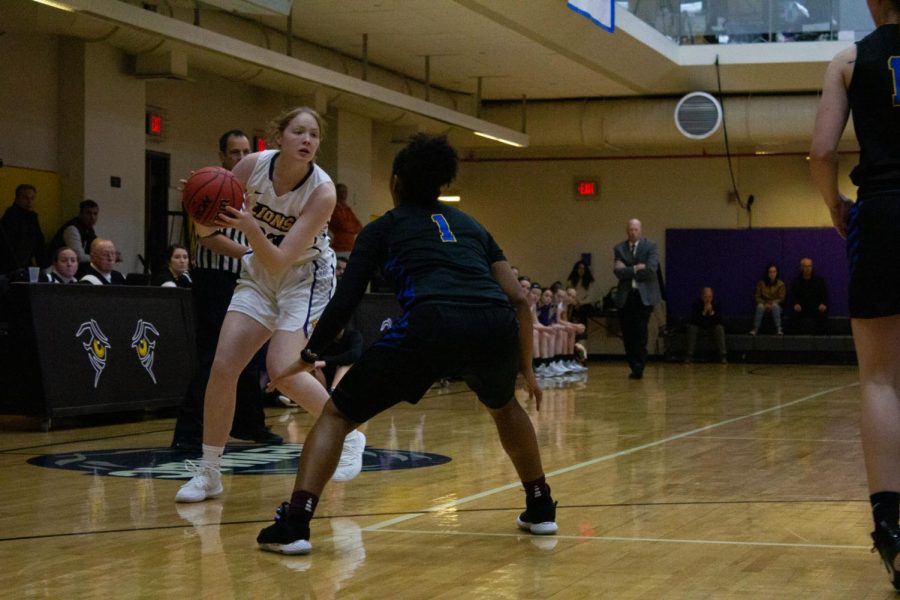 Chloe Allen (left) is the sole center on the women’s basketball team.

After moving to Boston from Wädenswil, Switzerland, freshman center Chloe Allen is adapting to a college setting and learning the style of basketball played in the United States.

“The transition was kind of hard because of how different basketball is back home,” Allen said in an interview. “It’s a very different style of play. Since I’ve been here for a few months, I’ve picked up the new playing style a bit. I know in time, maybe by next year or my junior year, I’ll definitely feel more comfortable.”

Allen, born and raised in Switzerland, formed a strong connection with basketball from a young age because her father played Division I basketball at Butler University.

Allen began playing basketball in 2007 and participated in multiple sports throughout her childhood, including soccer and swimming. Allen played for the GC Zürich Lady Wildcats, a club basketball team in Zürich, Switzerland, and for Zürich International School. She chose to continue playing in college because of her skills and her appreciation for the sport as a whole.

“I decided to stick with basketball because I had the most personal connection to it,” Allen said. “I generally liked the attitude around basketball as well, and I felt like it was the sport I was strongest in.”

Allen discovered Emerson while looking for schools with a communication disorders program. She reached out to women’s basketball head coach Bill Gould in 2017 to express her interest in playing for the Lions.

When recruiting players, Gould normally watches an athlete play live at least once. Since Allen is from Wädenswil, Switzerland, Gould used a non-traditional scouting process for her.

“We couldn’t go see her play live because of where she played, which made things a little tougher,” Gould said in an interview. “But once she sent me the film and I watched it and thought that she was a good player, we started the recruiting process.”

After reaching out to Gould, Allen flew to Boston to visit Emerson’s campus and athletic facilities in Sept. 2018. Although Allen did not know what to expect of the school before she visited, she ended her visit feeling confident about both the college and Gould.

“I ended up getting the right feeling when I toured the school and met with [Gould],” Allen said. “He was really friendly, and I got a really good feeling from him as well.”

Once Allen arrived on campus as a writing, literature and publishing major, she needed to make quite a few adjustments. She said the similarities between Boston and Switzerland made the move easier for her.

“It was definitely a bit of a culture shock,” Allen said. “I feel like Boston is a very good place to be for an international student. It tailors to a lot of our needs, like the convenience of getting from place to place and having good public transportation is what I’m used to.”

“[Allen] is a typical European post player,” Gould said. “Which is usually more skilled with ball handling, shooting, and passing than your typical American post player. It’s really good to have on the team as it fits right into our offensive scheme. [Allen] has been a huge help in that regard.

As the only center on the team, Allen said her height helped determine her role.

“On defense, it’s especially helpful,” Allen said. “If the other team happens to have a lot of height, it definitely gives me an advantage. When we’re on offense, it’s definitely important for me to get down in the post. For [the team], I’m not the most versatile player, I’m mainly a center, so I’m mainly there to provide height.”

Even though Allen’s height and skills help fill the void left by center Charlie Boyle ‘19, Gould said their playing styles are very different.

“[Allen] doesn’t play in the same way that [Boyle] did,” Gould said. “[Allen] is much more versatile in a lot of ways. [Boyle] was such a strong, physical presence down low. [Allen] fills a little bit of that role with her height, reach, and defensive abilities inside. She’s more versatile offensively, she can handle the ball a little bit more, and she’s a solid shooter for a center.”

Senior guard Natalie Clydesdale said Allen’s eagerness to improve and learn helped her adjust to her new role on the team.

“She’s such a coachable player,” Clydesdale said in an interview. “She’s always asking questions and wants to get better, so she’s a really good teammate to have. We changed our offense this year—we play a five-out so having only one center isn’t really an issue. Everyone can pretty much do everything. It’s definitely great having another presence on the court and she’s playing really well.”

After the Lions lost to the Massachusetts Institute of Technology in the New England Women’s and Men’s Athletic Conference quarterfinals last season, the team’s goal is to win the conference championship this season. Allen said she wants to help the team reach that goal in any way she can.

“We’re really pushing ourselves in practice every day and our coaches are pushing us really hard to help us achieve that goal,” Allen said. “As a freshman, it’s hard to be a major part of that, but I want to do my best to support them and help out where I can.”