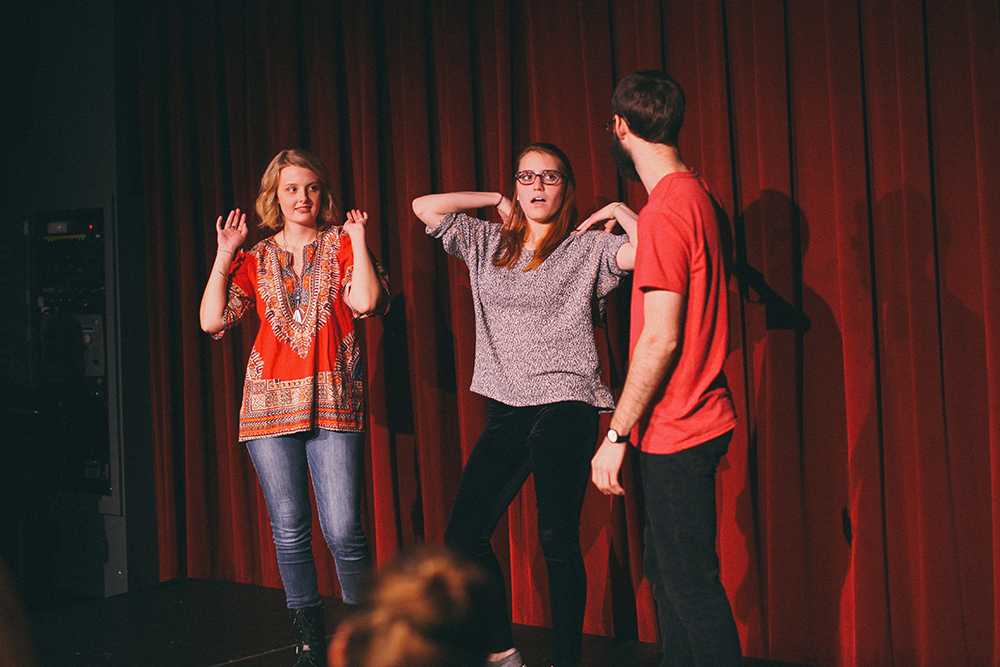 For the improv comedy troupe Swollen Monkey Showcase, also known as Swomo, one word is all they need to perform. No planned plot, characters, or scripted lines are necessary. The group kicked off its first show of the semester, “This is Your Day to Go Through a Lot,” with a combination of long- and short-form improv comedy in the multi-purpose room Saturday night. Eight members took the stage having no idea as to what could happen next, using only audience feedback and wit as catalysts for their spontaneous performance.

Hilarity ensued as the group performed a narrative based on the word “deli,” which focused on a “sandwich artist” named Trish who continuously reminds others of her prestigious title. Members of Swomo used their quirky sense of humor to portray a multitude of offbeat characters and situations, such as two preteen best friends, both named Suzy, who struggle with atypical adolescent issues like purchasing hot lunch at school.

While long-form improv implies one central story throughout the whole show, short-form involves several scenes that are unrelated to one another. Swomo took the opportunity to incorporate both forms, acting out situations including a cringe-worthy high school dance in which two girls use their elbows to attract boys, as well a scene in which two art thefts are interrogated by an offbeat curator.

“This is Your Day to Go Through a Lot” marks member Hilton Dresden’s first show with the group since his return from Kasteel Well last semester. Dresden, a sophomore writing, literature, and publishing major who has partaken in Swomo since the first semester of his freshman year, said he hoped Saturday’s show would give him a chance to adjust to the new dynamic.

“The goal of this show is to have fun and work well together and figure out how we work as a team,” said Dresden. “Last year we had the same group of people both semesters so this is my first time adjusting to new people.”

Kenzie Woodrow, a freshman visual and media arts major who joined Swomo last semester, said she feels the group warmed up to each other immediately.

“I’m really glad I found a group of seven best friends who all understand how to be weird together,” said Woodrow. “I feel like we’re starting off strong this semester.”

One of the many changes Swomo faces this semester is the boy-to-girl ratio of the group. Dresden said whereas in the past, the male members of the troupe outnumbered the girls, their new lineup is a bit different.

“Being that our group consists of five girls and two boys, I was worried that every scene would turn into something like a slumber party, but we’ve actually avoided that,” said Dresden. “Girls play boys, boys play girls. We just deal with it.”

“This is Your Day to Go Through a Lot” featured a scene in which Dresden portrayed an eccentric mother while Autumn McCumiskey played a dad on an awkward date. Dresden said it almost seems as though the girls in the group wind up portraying boys more often than the boys do.

The show was well-received, leaving longtime fans and new audience members laughing the whole way through. Cory Malone, a freshman journalism major, said he’d love to see another Swomo show after watching “This is Your Day to Go Through a Lot.”

“The cast had great energy and worked really well together,” said Malone. “My favorite segment was definitely Hilton portraying the mom who was also a sandwich artist.”