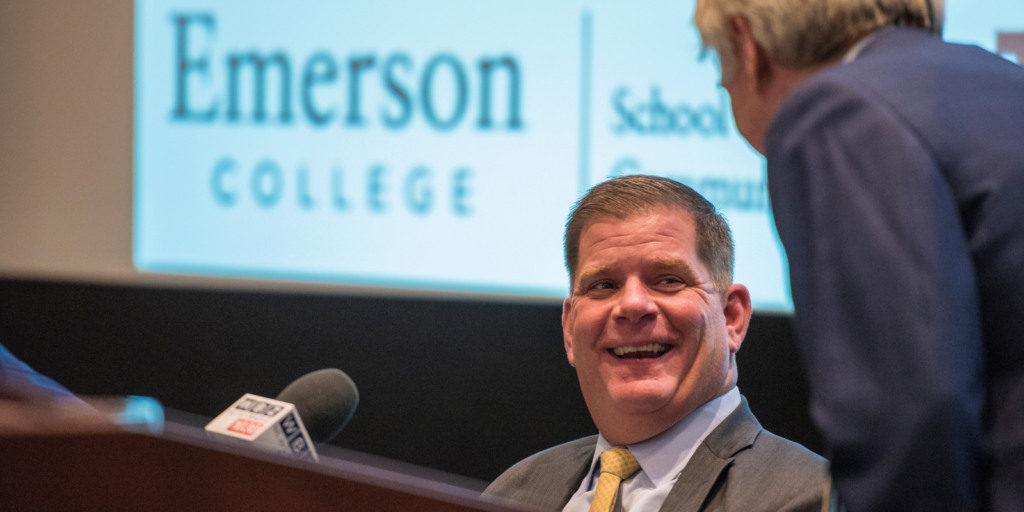 Mayor Martin J. Walsh talked about how he handles the media at the 5th Talk the Vote, a live radio show in partnership with WBZ and Emerson on Nov. 5 at the Bill Bordy Theater.

“The media is so hungry today,” Walsh said, “There’s a 24-hour cycle, you have everybody hungry for news and wanting to know what’s going on and they want to break a story.”

About 100 people attended the event: a two-hour long panel discussion, both moderated by Dan Rea of WBZ’s award-winning evening talk show Nightside With Dan Rea. The discussion was broadcast live on WBZ in place of Rea’s normal show.

The Talk the Vote show has previously been held at Regis College, the Massachusetts School of Law, Endicott College and Nichols College.

Emerson embarked on new initiatives and held events over the semester to increase student engagement for the midterm elections. During the last midterm election in 2014, 11 percent of students at Emerson College voted, according to the National Study of Learning, Voting, and Engagement.

President M. Lee Pelton emphasized students’ activism and their influence on local and national politics before the panel discussions.

“Young people and Emerson students, in particular, are bringing valuable perspectives and ideas to the local and national political conversation,” Pelton said.

Walsh and Tompkins discussed racism in politics and, the criminal justice system, and their efforts to aid Boston’s infrastructure, schools, and students.

Tompkins spoke about the racial demographics of the jail system.

“65 percent of [the Suffolk County Jail population] are Black or Latino,” Tompkins said, “In the Commonwealth where that same demographic is 18 percent. So it’s always been curious to me how you get 65 out of 18, frankly.”

Emerson students, alum, faculty, and members of the Boston community asked the elected officials about education reform and marijuana legislation.

In the second panel, Campbell and Kimball discussed Campbell’s sudden rise to the City Council Presidency, political polling, how general political polling and Emerson Polling works, and how these polling methods may be flawed in our current political landscape.

Campbell said if she were to have looked at polls during her win against 16-term incumbent Charles Yancey for the District 4 seat on the Boston City Council, she would have felt defeated.

“If I listened to polls, I would not be here with you this evening,” Campbell said.

Kimball talked about the importance of teaching proper polling interpretation in the classroom with an emphasis on how polls have a margin of error that can swing elections.

“One of the polling literacy issues that we teach our students here is that you have to be able to determine what the polls say,” Kimball said. “[In showing margin of error statistics] the audience can be educated in how to interpret these results.”

Campbell and Kimball also answered questions about a range of specific races analyze how Campbell won her seat.

“I knew that if I engaged a portion of [the senior citizen population] and pulled up all of these other new voters we could be successful,” Campbell said. “We also registered a lot of voters who had never voted before. If we got them to register to vote, they were ours.”