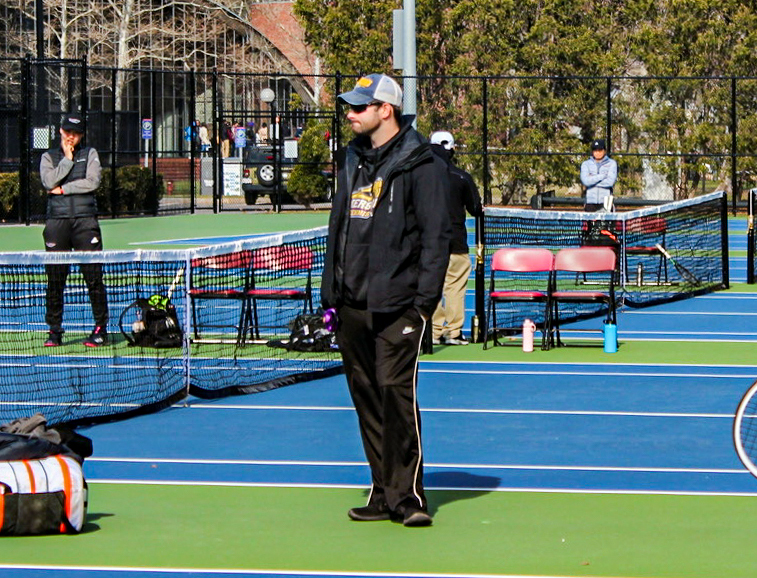 Head men's and women's tennis coach Aaron Bergeron has been on paternity leave since the birth of his child in November and will return to Emerson this week.

As tennis coaches’ families grow at home, questions arise about the teams’ upcoming spring seasons, a fate not unfamiliar to spring sports athletes.

Last fall, head coach Aaron Bergeron welcomed a child into his family, and assistant coach Andy Severance found out his wife is pregnant and due to give birth in June. The coaches head into the season with added commitments off the court, yet their focus remains with their team.

Bergeron said he is certain he will be devoting just as much time to the team as ever before, despite the baby at home.

“Nothing about the team changes whatsoever,” Bergeron said in a phone interview. “It won’t affect the team at all.”

Bergeron has been on paternity leave since the birth of his child in November and will return to Emerson this week. In his absence, Bergeron said assistant coach Burke Paxton led the way with recruiting and preparation for the upcoming season. Players and coaches praised Paxton for how he stepped up given the circumstances, but he viewed it as part of his job.

“[Bergeron] wanted to make sure he was able to take care of his family, and family always comes first,” Paxton said in a phone interview.

Severance and his wife found out a baby was on the way in September, but they waited to tell people until November. Soon after hearing the news, players began to wonder about the upcoming season despite their happiness for Severance.

“I was excited for Coach Severance because it’s an exciting part of your life to have a baby, but as I started to think more about scheduling, it definitely will be more difficult,” men’s tennis sophomore Michael Polivko said in a phone interview.

Paxton reiterated Bergeron’s belief that the staff is just as committed to the team despite the new addition to Bergeron’s family.

“I don’t think, in terms of coaching for them, it’ll be any different,” Paxton said.

Women’s tennis captain Thea Nagle described Severance as the “team dad” in a phone interview and praised him for his dedication.

“[Severance] commutes from Maine, so it takes him quite a bit to even show up to practices regardless with his travel,” Nagle said.

Severance said the only thing that may impact his availability is the ongoing pandemic and safety concerns, but he made it clear that he will still be as present as possible.

“With my wife being pregnant, the biggest consideration isn’t really time as much as I want to make sure I don’t get sick and pass it along to her and the baby,” Severance said in a phone interview.

The team will look for their captains to step up and be an extension of the coaching staff on the court. The coaches and fellow teammates expressed the utmost confidence in the captains of each team. If Bergeron or Severance had to miss a practice or two, the team believes it would be in good hands.

The women’s team is captained by juniors Nagle and Eliana Flores-Barber, while junior Maximo Aguilar Lawlor is the captain of the men’s team. The captains and coaches have lead team bonding sessions once a week since March 2020, where they frequently spend over an hour discussing tennis, their families, and everything in between.

“[Lawlor] has always been a great leader,” Polivko said. “He’s always been someone I looked up to both in respect and in terms of tennis.”

Bergeron is ready to return to the team after spending the first couple of months of his newborn daughter’s life at home. When asked about any advice he would give to Severance about his experience as a new father, Bergeron got straight to the point.

“The only real advice is ‘sleep now,’” Bergeron said.

Nagle expressed excitement and happiness for both coaches and her desire to get back on the court.

“We’re treating this as an opportunity to allow those underclassmen to step up and start doing more at an earlier stage in the team dynamic,” Nagle said. “We’re excited to have a new team mascot [in] Bergeron’s baby.”

Maximo Aguilar Lawlor, who serves as The Beacon’s multimedia managing editor, did not edit this story.