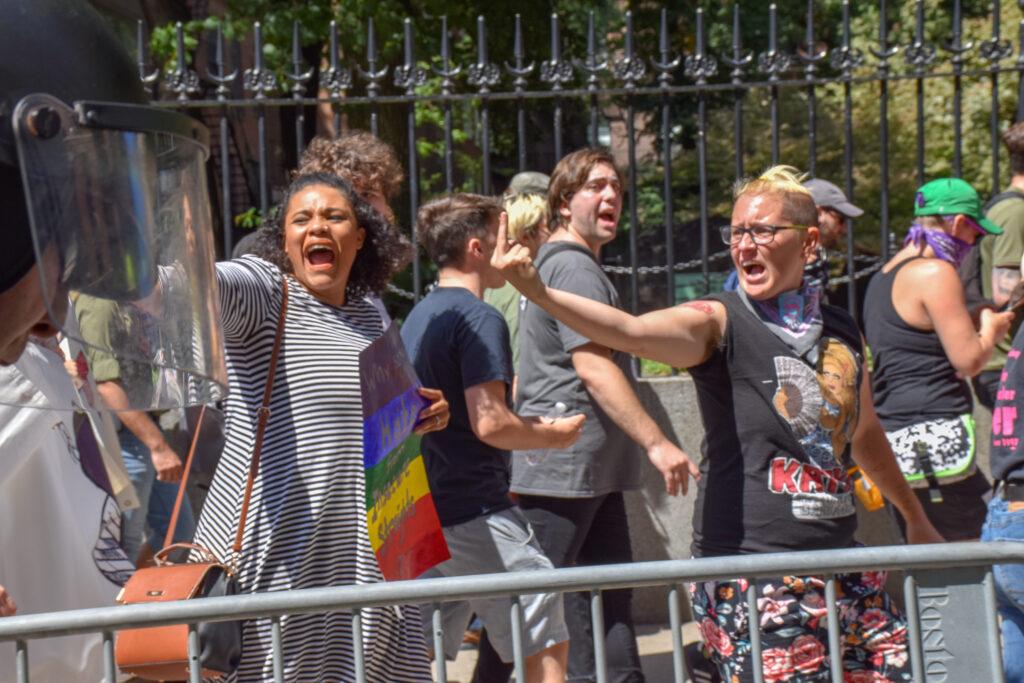 The parade divided city streets between participants and protestors, separated by metal barricades and law enforcement. Marchers began to gather in Copley Square around 9:30 a.m., alongside about 50 police officers from the Boston Police Department. The officers wore crowd-control helmets for the parade.

Several hundred people gathered at City Hall Plaza at 9 a.m. in protest of the Straight Pride Parade, some wrapped in Pride flags and carrying posters.

Milo Yiannopolous, the Grand Marshal of the parade, made an appearance in Copley Square around noon. The processions, led by a float decorated with dozens of signs in support of President Trump, set off down Boylston Street shortly after Yiannopolous emerged. Patriotic music blasted from speakers as participants made their way through downtown.

The parade turned at Tremont Street before making its way up to City Hall where the organizers held a rally. Boston Police shut down all of the streets along the parade route and put up barriers and security checkpoints.

Multiple fights broke out along the parade route as protesters clashed with both police and attendees. Boston Emergency Medical Services transported five people. A spokesperson for the BPD said 36 individuals were arrested and four officers were injured.

At one point, police attempted to move down Congress Street only to clash with protestors—throwing at least four on the ground and zip-tying their wrists.

“I don’t feel that it’s about being an oppressed minority at all. I think it’s just being proud of who you are,” Camden said.

The parade organizers stated on their website that straight people are an oppressed majority, but multiple participants told The Beacon that they have never been discriminated against because of their sexuality.

“No one is out here saying, ‘You’re straight, that’s evil,’” Elizabeth Maxwell, of Rhode Island, said. “The only thing I can think of is how the media produces content for the general public, like the Gillette ad. They alienated their core audience [by marketing to LGBTQ+ people.]”

James Harrington, of Lowell, attended the parade with his 8-year-old daughter, who carried a “Make Normalcy Normal Again” sign. He would not say whether he supported LGBTQ+ rights, but said that he had never felt disadvantaged as a straight person.

President M. Lee Pelton said in a phone interview that he is away from campus today but has been getting updates on the events.

“I trust the broader community and the students to behave and protest responsibly. We’re on the right side of this and can speak with moral clarity and candor that [the parade goers] cannot,” he said.

Pelton denounced the event in a community-wide email, calling it a “perversion” and a “desecration of beauty, truth, and generosity.” Organizers of the parade responded to Pelton’s comments at a Thursday press conference claiming the president’s comments put their safety at risk.

“I’m very clear that when this ugliness rears its head we need to speak clearly and call it what it is,” Pelton said in the interview.

Emerson student Emma Sawyer, a freshman, leaned up against the barricade as the parade passed by Little Building.

“Unfortunately it’s not surprising, but I really appreciated our school’s response to this and I feel really safe here in front of my dorm and protected by the police here,” she said. “This stuff is happening everywhere. It’s becoming some kind of reality which is just so terrible.”

Former SGA Treasurer Candidate and sophomore Brady Baca protested the parade and said the demonstration was an attempt by the organizers to prove how they are oppressed for being straight.

“I think that it’s very clearly just an attempt to continue this whole narrative that straight, white people are the real ones who are oppressed in America,” he said. “It’s similar to what they did in Portland and at the other straight pride parade last weekend.”

He said that directing the parade to pass Emerson was an attempt to intimidate students.

“I think it’s a pretty bold-faced attempt to intimidate the incoming freshman class and validate the right-wing groups on campus,” he said.

“I support LBGT rights and will continue to fight for them,” he said. “I also think constitutional rights are something that need to be celebrated—I have the right to be here, as do the protesters, as long as they’re peaceful.

When the parade reached City Hall Plaza, participants were directed toward a security checkpoint that led to a stage set up beside City Hall. BPD checked bags, confiscated flags and signs on sticks, and used handheld metal detectors.

Once a group of approximately 150 participants arrived at the stage, the organizers and speakers began their speeches.

“They like to call us radicals. It’s about time for us to get radical,” she said. “My God, my God, they are telling our children it’s okay to be gay. I have a right to say it’s not okay to be gay.”

A group of several hundred protestors looked on outside of the police barricades as the speakers took the stage, chanting at the participants and trying to disrupt the rally.

At 2:44 p.m., Emerson College Police Chief Robert Smith sent an email to the college community, indicating that the parade had concluded. He said college operations would resume at 3 p.m.

Belen Dumont and Anissa Gardizy contributed to this report.