The Berkeley Beacon shuts down after 73 years 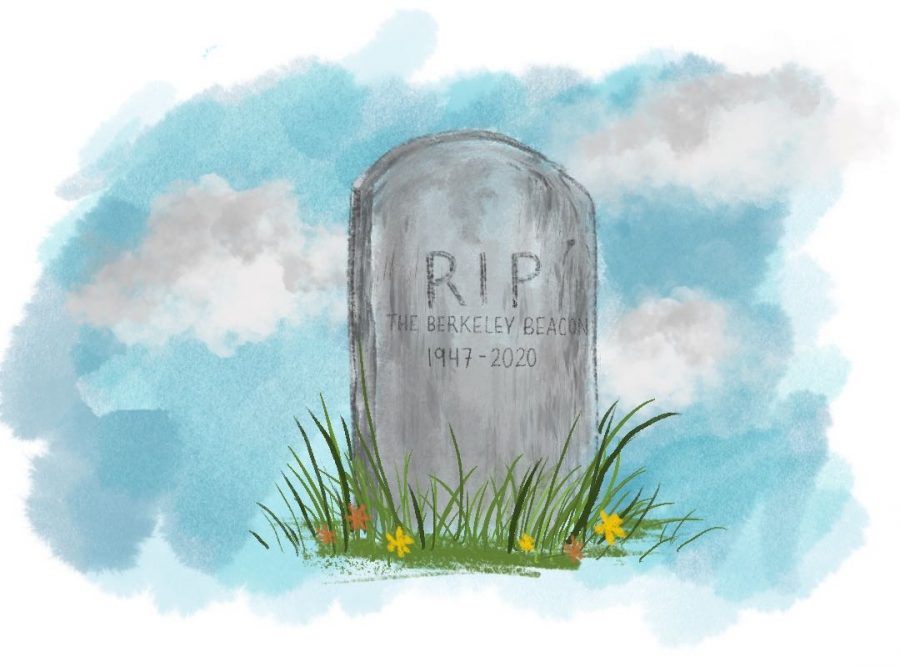 The Berkeley Beacon announced it would be shuttering operations on Wednesday at 10 p.m.

We are pained to announce that The Berkeley Beacon, the college’s only student newspaper, plans to shutter operations effective Wednesday at 10  p.m. after more than 73 years of serving the Emerson community.

After necessary funding was denied, we concluded that it was impossible for us to continue normal functions. Upper management considered extensive layoffs to save the paper, but then realized that we are not allowed to pay our staff.

Therefore, we will be merging with Emerson Today in order to preserve our archives. Unfortunately, none of our current staff members will be able to continue working in the fall.

“After crying in my bed all alone for 14 hours straight, I think I can see some hope in giving total control of the paper to the college,” Editor-in-Chief Chris Van Buskirk said in an emotional late night phone interview. “I trust the folks over at Emerson Today to keep publishing hard-hitting stories that keep the administration accountable, despite being the public relations arm of the college.”

The Berkeley Beacon was started in 1947 by Paul Mundt, who also happened to be the Student Government Association President (ironic, we know). Therefore, we only think it is fair if SGA Executive President Will Palauskas takes the reins as the editor-in-chief of The Beacon for the few hours we have left. Will, we appreciate your dedication to the fourth estate.

“The Student Government Association definitely has a grasp on what makes a good newspaper,” Managing Editor for Business and Operations Dylan Rossiter said in a statement. “I have total faith.”

As for positions for the Fall semester, editors and public relations administrators at Emerson Today plan to assume all hiring operations effective immediately. Applications will close on Friday at 11:59 p.m.

The Beacon office at 172 Tremont will now serve as an exclusive lounge for Campus Life administrators. The office plans to host Andy Donahue’s going away party in the office sometime in late April, sponsored and catered by the Tam.

The Beacon’s advisor Douglas Struck plans to serve as a copyeditor for Emerson Today working primarily on press releases and canned statements. Struck’s new found love for public relations came as a surprise to most of the editors at the student newspaper.

“After a lengthy career in journalism including a stint at The Washington Post, I have decided to sell out,” Struck said in a statement via the college’s public relations office. “The dark side doesn’t seem so bad when it’s the only option left on the table.”