The eerie music of Anne Malin 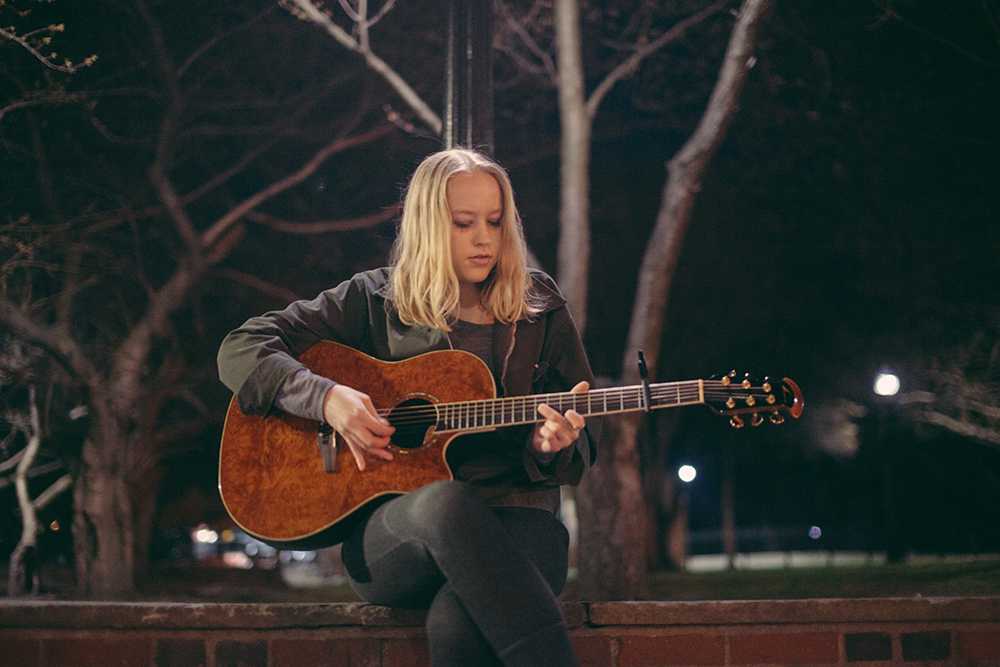 In the woods of Interlochen, Mich., freshman Anne Malin Ringwalt discovered a bog while exploring the forested campus of her art school. Here, she had a vision: to return with a tape recorder and record music. While she never did make it back, what resulted from her immersion in nature was not her first, not her second, but her third studio album, Bog Songs.

Ringwalt’s musical career started in her final two years of high school, where she abandoned her middle school dreams of being a pop singer and began recording folk-inspired music with friends. In 2012, the experimental recordings that took place in the writing building at Interlochen Arts Academy culminated in her first album, Vessels, and parts of her second album, A M. She later introduced more electronic elements to create an airy, dark discography that blends styles similar to St. Vincent, Daughter, Frankie, Cosmos, and CocoRosie.

Ringwalt studies writing, literature, and publishing here at Emerson, and considers herself primarily a poet and a fiction writer, despite the fact that she is currently working on her fourth studio album.

“I started writing when I could hold something and have fallen more and more in love with language every day,” said Ringwalt. “I think I just came out of the womb and was like, ‘Yo, I’m gonna be a writer!’”

In Jan. 2013, Ringwalt was a National YoungArts Foundation finalist for fiction writing. She was chosen from a pool of nearly 10,000 applicants and was awarded $3,000, some of which she used to pay for Interlochen, and the remainder of which she used to fund the recording of Bog Songs, the first of her albums to be recorded professionally.

“Everything up until this latest album has been really indie,” said Ringwalt’s friend and returning collaborator, Will Johnson. “Her first album was recorded largely on an old cassette-tape machine, the type usually used for learning languages. They’re not intended for music.”

Johnson, now a freshman studying technology in music and related arts at Oberlin College, adds the electronic elements to Ringwalt’s tracks. For Vessels and A M, he took the cassette-tape recordings and fed them into his computer to blend the analog sound with digital effects. On “Judgment Day,” the second track off of Bog Songs, Johnson synthesized the guitar sounds to make them sound as if they were recorded underwater, simulating the feeling of the bog that Ringwalt originally fell in love with. Ringwalt offers her collaborators a lot of free reign within the scope of her vision, he said.

“It’s pretty rare for an artist to give you a lot of space to change things,” said Johnson. “Typically when artists have a song already written and bring collaborators in, they don’t want to change things from that point. [Ringwalt] is simultaneously driven and very accommodating, though. If we think something should be cut, she allows us to make changes.”

Ringwalt said she prefers working with collaborators to bring a mix of energies to her material.

“I see music as a communal act as opposed to an act of solidarity,” she said.

Still, Ringwalt maintains the lyric-writing process is individual. Her songs are deeply rooted in personal experience and contain elements of darkness, she said. She combines blunt, emotional lines with strong imagery like “eyes covered with honey” and “I drank a pink sky and vomited blood.”

“It’s a bit eerie and dark, and when you look at her, you don’t expect that,” said Jacqueline Donahue, a freshman visual and media arts major when describing Ringwalt’s music video for a song called “Dear Old Squalor Baby.”

Donahue is one of Ringwalt’s current collaborators who is filming the video. She said the aesthetic is very reminiscent of Ringwalt as an artist. Some of the footage shows fake zombie blood swirling in a sink, while other shots feature Ringwalt laying in a bed in a crème-colored dress with images projected onto her.

“Her music is melodic and calming and puts you in a trance, but some of the stuff she sings about is really deep,” she said. “It’s really refreshing and experimental.”

Ringwalt is constantly expanding her role as an artist, using the practice rooms in the Colonial Building four to five times a week and shooting music videos, as well as promotional videos for her upcoming album. Though Ringwalt said she wishes she was performing more than she is now, she began her Boston stage career by playing at TT the Bear’s Place in Central Square, Cambridge, and The Womb in Allston.

“She doesn’t perform with a lot of other people. It’s just her and her guitar,” said Donahue. “You would think it wouldn’t be enough, just seeing this blonde girl on a huge stage. But her voice tells a whole story. She doesn’t need a whole lot of instruments.”

“Not only did Annie Clark judge the show, but all the judges gave feedback on the performances,” she said. “It was a profound moment for me and gave me the extra push that I needed, knowing that people far beyond me are in support of what I’ve been doing.”

Ringwalt admitted that if she hadn’t played in the talent show, she would have been concerned about the pursuit of a music career in a city.

“People often say that what you write depends on where you live, but, now especially, I don’t believe that,” she said.

All three of Anne Malin’s albums are available for streaming on Spotify and for purchase on iTunes. She will be returning to The Womb on Saturday, April 19th at 8:00 PM to perform.