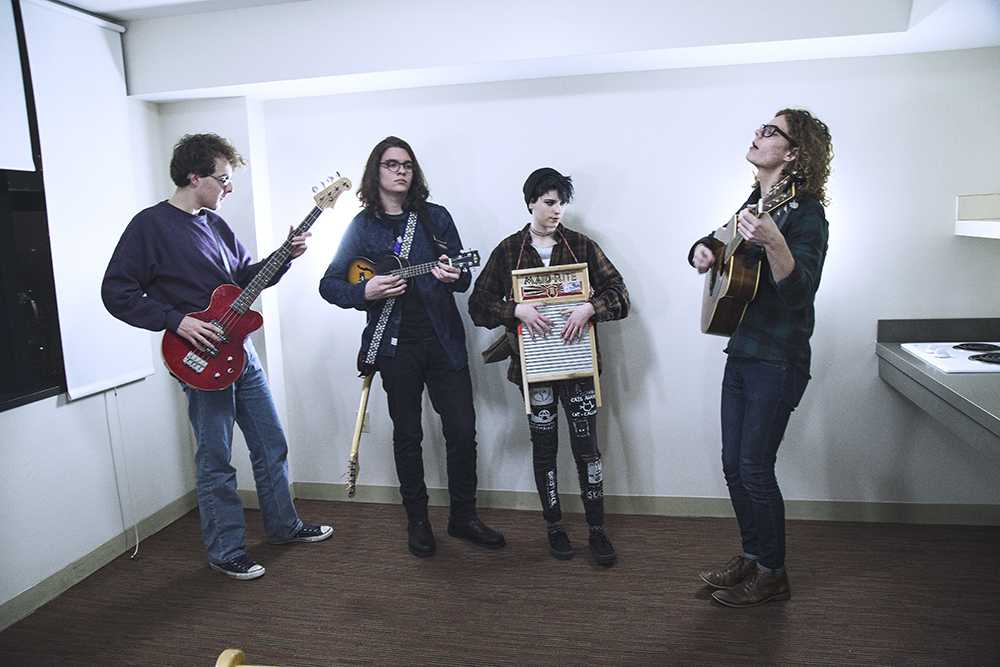 For the past few months, freshman Ben Mueller and his new band have been harmoniously filling the hallways of Emerson dorms with folksy melodies from their acoustic instruments. Now, the members of Ben Mueller and The Low Ceilings are ready to expand their performances from the Little Building to greater Boston—and beyond.

Comprised of four first-year students at the college, the band—which got its name because Mueller liked the sound of it, and doesn’t reference the low ceilings in Allston basements where many new local bands get their start—is working with Emerson’s student-run record label Wax on Felt to produce a folk-centric album this semester.

For Mueller—the band’s guitarist, songwriter, and de-facto leader—the past few months have been a series of exhilarating moments in his musical career.

“I’ve never had a full band behind me,” said Mueller, a visual and media arts major. “I never expected this to be as big of a deal.”

Since the band’s inception in October, members have blossomed from casually acquainted to completely committed to their craft as they rehearse and play together at least twice a week.

His inspirations range from mid-era Beatles to contemporary groups like Fleet Foxes and Beirut. He cites their energy and honesty as qualities he aspires to emulate.

Mueller, who hopes to take classes with an emphasis in audio during his time at Emerson, writes all of the band’s songs, using his guitar to create the melody. He then records a demo to send to his bandmates. From there, they help him arrange it, adding their instruments into the musical equation.

Freshman Phil Jones, the band’s bass player, first met Mueller at an open mic in a dorm common room in September. Weeks later, according to Jones, Mueller messaged him on Facebook, out of the blue, with a proposal: joining him for Wax on Felt’s annual competition, Battle of the Bands.

“He never even heard me play before,” said Jones, a visual and media arts major.

The duo managed to nab second place—and a recording contract—at the contest in early October. From there, Mueller said he knew he had the beginnings of a band.

Julia Brackett, a freshman political communication major, grew up in New Hampshire but found herself enraptured by the folk punk scene in Worcester, Massachusetts as a teenager. This fall, she coincidentally found herself down the hall from another folk enthusiast—Mueller. It didn’t take long for the two to bond over their shared love of music. When Mueller realized Brackett played the washboard, they quickly set up a jam session. Now, Brackett is the washboard player and manager for the band.

“Since I grew up [in this area], I know a lot of people from the Boston and Worcester area,” said Brackett. “It’s very easy for me to hit someone up to book us for a show.”

Mike Ijac, the final member of the band, said he has been playing music for as long as he can remember. Now, he said he plays dozens of instruments, including the guitar, drums, accordion, saxophone, clarinet, and ukulele.

“It’s a great way for me to express myself when words don’t suffice,” said the visual and media arts major, who became a sophomore this semester with his prior high school credits.

Ijac, who first met Mueller at an event for students who had applied to Emerson and were accepted, characterized the band’s sound as “cheery sounding songs that have introspective lyrics.” He the ukulele does the best job of conveying those seeminly contradicting ideas.

“The ukulele is great for chords and is almost always a happy instrument,” said Ijac. “But there’s a sense of morality and mortality behind it.”

“Our sound is ever changing. We always have a different feel,” said Brackett. “It never is exactly the same. It’s cool to be in something so malleable.”

Noah Mahrer, the president of Wax On Felt, said the organization is excited to work with the band.

“They have a unique sound. It’s organic and altogether,” said Mahrer, a junior visual and media arts major.

As part of their signing with Wax On Felt, Mueller and his band get plenty of perks, according to Mahrer, including gaining access to professional equipment to record the album, being booked at events, and having artwork created that will be put on the album cover and merchandise like T-shirts.

All four band members agreed that ideally, playing in the ensemble could turn into a career. But for now, their job is still being students.

With all the rehearsals and recordings, the band members said it can be easy for schoolwork to get lost in the shuffle. Mueller, for one, is in Emerson’s more academically strenuous honors program. And although he doesn’t see himself switching schools, he said he is starting to view college as the backup plan to a musical career. For Jones, it has been a challenge to plan last-minute gigs around his other extracurricular activities, like his job at the Emerson-based radio station WERS.

But Ijac said he sees these difficulties as nothing more than typical roadblocks. And it’s the music that makes those complications worth overcoming.

“Life is a balancing act,” said Ijac. “No matter what you’re doing, you are going to be struggling. So you might as well do what you love.”