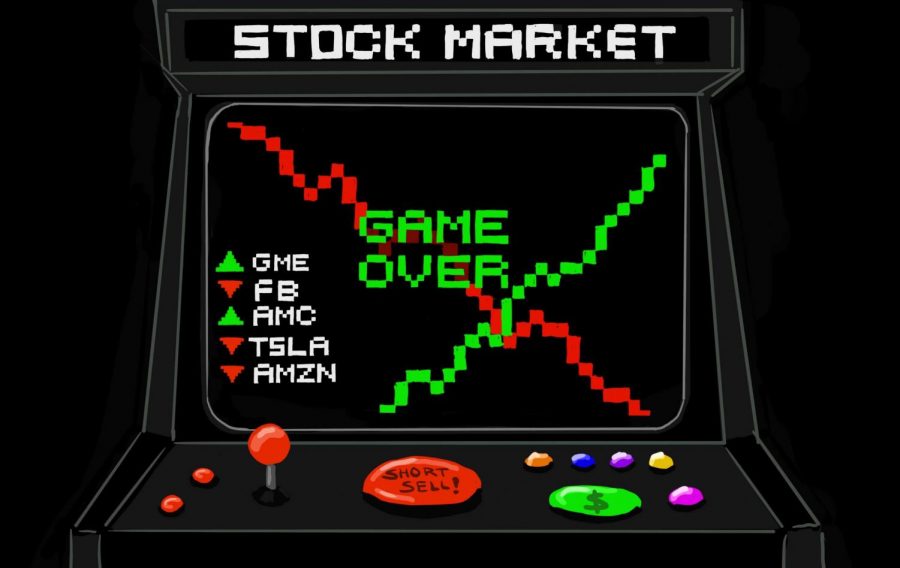 Retail investors, trading for themselves rather than on behalf of institutions or corporations, first hatched the plan on the Reddit community r/wallstreetbets almost a year ago.

The stock market uproar over the past two weeks has enthralled financial institutions and social media platforms alike. It threatens to prove, if nothing else, that the “free” in “free market” exists only in the eye of the beholder—that is to say, for those who can afford to make it so.

The saga began with the abrupt, meteoric rise in the stock price of GameStop (ticker GME), along with various other securities. Yet what is most remarkable isn’t GME’s swelling market capitalization itself—exploding nearly 1600 percent last month, from its Jan. 3 price of $17.25 to an intraday high of $483—but rather the fact that it was accomplished almost exclusively by individual, not professional, investors.

Retail investors, trading for themselves rather than on behalf of institutions or corporations, first hatched the plan on the Reddit community r/wallstreetbets almost a year ago. In other words, the spike was brought on by amateurs, “dumb money,” and outsiders to the world of finance. Common people.

The snag is for those most accustomed to reaping the market’s lucrative rewards: the hedge fund managers of Wall Street. GME is one of many securities that hedge funds have liberally “short-sold”, meaning managers borrow a stock from brokers and sell it to third parties, hoping to buy it back from them at a lower price and thus profit off the return. In waiting for the price to lower, they effectively bet against the company, waiting to cash in on its decline.

Yet when the price rises—as it did drastically for GME—the short-sell scheme becomes a “short squeeze,” meaning that short-sellers have to buy back their stock at a loss. For Wall Street, that loss falls in the vicinity of $19 billion for the last week alone, according to Business Insider.

Predictably, the suits on Wall Street were baying for blood the moment their profit fell into the red. No sooner did GME rise than did the financial press turn on retail investors, slandering them as immature mavericks. They labelled the spike as a “frenzy”, a “stampede”, even an “insurrection,” and they called for someone to step in and stop the madness.

On Jan. 28, after having witnessed GME rise to an all-time intraday high at $483 a share, the online broker app Robinhood banned stockholders from purchasing further shares on its platform. American Movie Company (AMC), Nokia, Blackberry, and other surging stocks faced similar restrictions.

Robinhood claimed (days later) that the stoppage was necessary for them to raise transactional collateral and clearinghouse deposits. The obvious explanation for the move is that it was designed to placate the hedge funds and short-sellers—who, of course, also happen to hold significant stakes in the brokerage. Regardless of the truth, on Jan. 28, Robinhood afforded its traders no justification. For stockholders of those select securities, there was only one option: sell.

As could be expected, stock prices plummeted. Wall Street breathed a sigh of relief—their losses stemmed, at least for the moment. Yet the outcry from retail investors was swift.

Leon Wenhao, a sophomore visual and media arts major, purchased an undisclosed amount of GME shares after first learning of the surge on social media. For him, the trading cutoff was yet another illustration that the hedge funds and short-sellers—the elite—would stop at nothing to protect their supremacy over the market.

“We can make this argument—one that a lot of people really believe—that this country is built on the free market,” Wenhao said in an interview with The Beacon. “But what we’re seeing now is that the free market is free until the average people make money and the billionaires lose money. What we’re seeing is not a ‘free’ market; it is blatant market manipulation by Wall Street.”

While some retail investors have reported spectacular returns, most, like Wenhao, are not just concerned with profit.

“I’m not really making a lot of money in this,” Wenhao said. “I’m pretty sure that’s a common thing for most people buying GameStop right now. This isn’t about how much money you can make; it’s about sending a message to Wall Street.”

More than a declining video game retailer, Wenhao is investing in a social movement—one that reflects the anti-establishment consciousness of a generation that has seen its future “shorted” too many times.

There’s no coincidence that this episode has been driven by millennials and zoomers, the generations molded from the embers of the 2008 recession. This is a rejection of the elite’s monopoly on the stock market, a rebuke of the financial institutions openly lining their pockets from America’s decay—a narrative only confirmed by their furious reactions.

At best, the financial elite dismiss retail investors as irresponsible novices—at worst, tarring them with spurious links to conspiracy theorists and alt-right groups. They throw around words like “fraud” and “collusion” to focus the government’s attention on r/wallstreetbets while ignoring the collusion at fund managers conferences and luncheons. Most vehemently, they call for “regulation”—a first for Wall Street—to ensure that these upstarts never cause this sort of “market volatility” again.

“I only see these kinds of questions asked when the average people are making money,” Wenhao said. “Where are these questions when people on Wall Street are doing this?”

“They love to tell poor people, ‘Hey, use your money and invest,’” he continued. “Well, we did, and we made money and they lost money, and only now are there all these questions about rules and regulation in the market.”

Because of the decentralized nature of the jump, the U.S. Securities and Exchange Commission will have a difficult time demonstrating GME’s rise to be a fraudulent scheme, noted CNBC.

“We’re just playing by the trick that has been played for decades,” Wenhao said.

Instead, traders like Wenhao are hoping that the SEC will intervene on their side.

“People need to go to prison,” Wenhao said, referring to the short-sellers who allegedly pressured Robinhood into clamping down on trading. “You can’t just slap them on the wrist; if they don’t go to jail, ten years down the line this might happen again. If we really are in a free market, these things should not happen, and people should definitely not get away with them.”

The company is currently facing a class action lawsuit from the very traders it betrayed, as well as the possibility of an SEC probe. Given the wide range of political forces arrayed against the brokerage (everyone from Rep. Alexandria Ocasio-Cortez to Sen. Ted Cruz), the eventuality of a full exoneration seems unlikely.

That is, barring external pressure from Wall Street or from others in government; Treasury Secretary Janet Yellen received $810,000 in speaking fees from Citadel LLC, a large hedge fund and affiliate of Robinhood, Slate reported.

As for GME, AMC, NOK, BB, and other securities, their market caps had fallen by the end of trading on Feb. 2, but remained far above their early January lows. They were not sunk by the cries of Wall Street or even the iron fists of brokers; they survived.

So too does this ragtag movement survive, at least for the moment. Yet it would be a mistake to say that this social consciousness has its sights set on shorted stock alone.

In terms of ambition, it is being sent to the moon.