The Girlie Project returns Friday with new rendition of ‘Grease’ 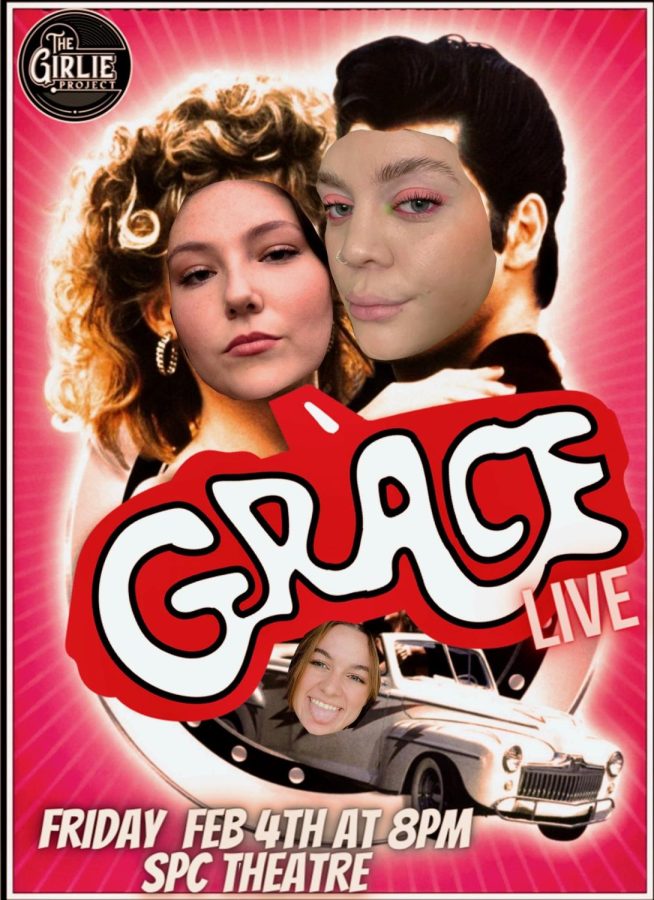 The Girlie Project is back Feb. 4 with another staged performance—this time, with their own comedic read-through of the classic musical “Grease,” uniquely titled “Grace.”

Since senior visual media arts major Isabella Bertram is a sophomore, the troupe has been doing semesterly renditions of well-known shows. They’ve previously done an episode of Victorious, iCarly, and most recently, an adaptation of “Annie” called “Alaina.”

“Doing these performances is our ultimate bonding at the beginning of a semester because we’re a troupe, we are so close with our writing,” Bertram said. “A lot of trust is required in order to write together, to create together, and we’re a comedy troupe too so it’s important we don’t take ourselves too seriously. We had such a good time doing our first musical last semester, and there’s a theme of singing and dancing in our sketches. It’s something everyone in our group really loves to do.”

Now, as the president whose last semester is this spring, Bertram is especially excited for “Grace.” She’s looking forward to seeing how the group’s dynamic evolves with new roles in leadership, as well as new members, who will be especially featured in the production, which is named after new member sophomore Grace Cameron.

“It’s kind of a fun way to introduce them to the comedy community and showcase and celebrate our new talent,” Bertram said. “I’m very excited to see what the troupe grows into and see what I’m leaving behind. We have a lot of people who have come so far in the group in terms of writing, performance, or whatever.”

Sophomore theater and performance major Annajean Gionta is another new addition to the troupe, and will be playing “Grease”’s very own Sandra Dee.

“I cannot wait to share the stage with people I look up to so much,” Gionta said. “It’s just going to be so fun. Performing something silly on stage with cool people is like my life dream.”

Fellow sophomore theater and performance student Lorelei Barcelos is the last recent addition to the group.

“I actually have never seen or heard ‘Grease’ in my life, so I’m really excited to go from not knowing anything about ‘Grease’ to being in ‘Grease,’ and being the titular role of Danny Zuko,” Barcelos said.

Sophomore visual media arts student and treasurer Alaina Reyes said the idea to do a “Grease” show originated last semester, keeping the tradition of a musical as the first show of the semester to introduce new talent.

“I know Katie Kendrick has been pushing for it ever since we did ‘ALAINA’ last semester, I specifically remember getting brunch with her and Mason Grammer, and we already had the whole thing casted out in our heads,” Reyes said. “Also we’re The Girlie Project, obviously we would do at least one musical this semester. It’s part of our brand at this point.”

Each rendition requires a pre-existing script, which is condensed to fit into an hour to an hour and a half show. The organization typically has three to five rehearsals for blocking, creating funny bits, and drilling musical numbers and choreography. Performances aren’t memorized, with the group instead reading off scripts on stage, which add to the comedic flare.

“Our sketch shows are so much fun, but Girlie musicals have a special place in my heart,” said Reyes. “I know the whole point is that we do these musicals as a joke, but I know every Girlie has a part of themselves deep down that takes it 100 percent seriously.”

For “Grace,” a “Grease Live” script was utilized and shortened, Bertram’s editing adding memorable moments from the “Grease” movie.

The group has been passionately dedicated to rehearsing for the musical, which has been an eight-day turnaround. Reyes says to “prepare your singing voices,” as the show has a total of 13 musical numbers.

“I’ve been listening to only ‘Grease’ for the past 48 hours to memorize the songs,” Reyes said. “We are not playing around. Thankfully, Girlie has MASTER choreographers and good dancers and singers, most, if not all, of us, grew up as theater kids.”

Barcelos also mentioned the hard work that is going into the rehearsals.

“We’re doing a lot more choreo than from what I heard when they did last year’s,” Barcelos said. “The musical numbers are more intense than they have been. I’ve actually been sweating like I’m at an actual rehearsal for ‘Grease’ the musical.”

As a theater and performance major, Gionta is applying her acting experience to the Girlie stage. However, she’s looking forward to expanding her comedy writing skills through a team effort.

“I’m really excited to explore my writing with Girlie,” Gionta said. “I have been acting for years, but sketch writing is somewhat new to me, so I cannot wait to collaborate with the other girlies and write some amazing comedy.”

With the current state of the world, Gionta finds comedy crucial, and The Girlie Project provides the resources to practice the craft.

“I love doing comedy because 2022 is a hard time to live in and comedy offers me some relief from everything else in the world being so serious,” Gionta said. “Comedy helps me relax, find joy, and not take things so seriously. All of the other girlies are my favorite part of being in the Girlie Project. Everyone is truly so kind, welcoming, and hilarious.”

The highlight of The Girlie Project is the supportive community it fosters. With added characteristics of funny jokes, creating shows, and performing, the creative experience is limitless amongst the intimate group.

“My favorite part about Girlie would just be that experience and that gift of having this space with unlimited creativity where you are unfiltered and you’re able to really just play with each other to explore different ideas,” Bertram said. “Girlie really helps people showcase their individual talents and skills, it’s nice to create a space where everyone can do that and grow as performers and writers.”

Echoing the same idea, Reyes attests working to produce content to make people laugh with not just anyone, but also her friends, is the most rewarding part.

“Finding people who share my sense of humor and then working on something together and riffing off of each other is just such a specific energy,” Reyes said. “I’ve had friends tell me that our shows are fun because they can tell we’re also having fun on stage, which is so true. All we do while we’re up there is try to make each other laugh. That should always be the number one priority for any kind of comedy show, because if none of the people on stage are having fun, then how will the audience have fun?”

Following “Grace,” the troupe has big plans for the upcoming semester. They plan to have three sketch shows, presenting their own written and workshopped sketches. One of which is a combined show with acapella group Noteworthy, which Bertram teased will most likely be their last show.

As new member Barcelos sums up the troupe, show, and comedy altogether, “The best part about anything is just making people laugh.”