The Haunted Hour rises from the dead for season two 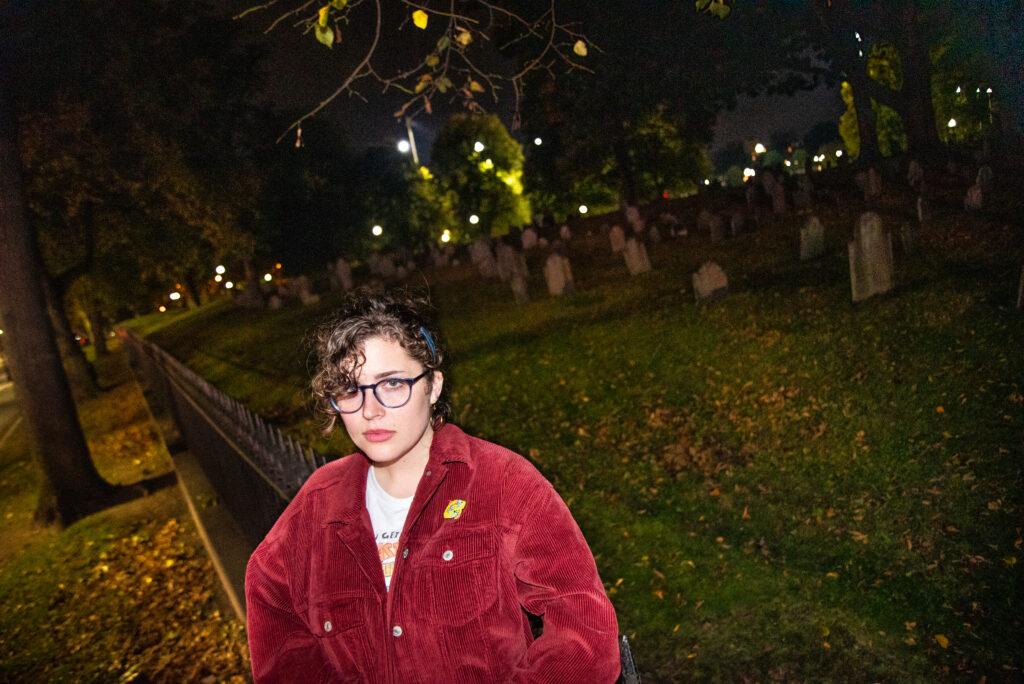 Junior Elinor Bonifant submitted her podcast, The Haunted Hour, to the 38th Annual EVVY Awards, causing it to win the first ever award in the Outstanding Podcast category. Jakob Menendez / Beacon Staff

Trapped in Boston Logan Airport during a flight delay, junior Elinor Bonifant hastily connected to the slower-than-molasses public wi-fi. Bonifant submitted the first season of her original podcast, The Haunted Hour, to the 38th EVVY awards while waiting for her flight—she did not expect to become the first winner of the new Outstanding Podcast category in April.

After two years of imagining, drafting, and refining scripts, Bonifant and her team of creatives are translating the momentum from the show’s recent victory into a second season that will air on WECB, the college’s student-run radio station. The new season of “The Haunted Hour” will feature eight full-length episodes, each about 15 to 20 minutes long.

Bonifant, the creator of the horror-comedy podcast, spent her past two summers in North Carolina writing the script. Bonifant said that “The Haunted Hour,” based in the fictional town of Lantern, North Carolina, is an audio-fiction narrative that follows the spooky and satirical paranormal experiences of a group of high school friends.

“I’ve always loved audio-fiction format,” Bonifant said in an interview. “I thought it would be a great way to bring people together that aren’t necessarily interested in radio.”

Bonifant developed an interest in radio broadcast during her freshman year while working for WECB. In an effort to bring new listeners to the station, she found the opportunity to manifest her passion project into an award-winning podcast.

“This is truly the only place where we could create what we did on the budget we did,” she said. “It feels like such an Emerson project.”

Junior Zoe Eicher, producer of “The Haunted Hour,” said making an accessible and inclusive project was important to the two when preparing the show.  Twenty-nine crew members work on the podcast—ranging from audio engineers to graphic artists—and all play an equally important role in the production process, Eicher said.

“There’s so many moving parts to creating a single episode,” Eicher said in an interview. “But it’s definitely worth making a place for everyone.”

Bonifant said the basic process of airing an episode of “The Haunted Hour” feels tedious. She begins by drafting a script for the episode. From there, each scene is recorded three times by the actors and then sent by Bonifant to senior Chad Costa, the show’s audio designer, in Los Angeles for editing.

“Chad is absolutely insane,” Bonifant said. “He just locks himself in his room and will edit the whole episode in one go.”

“The Haunted Hour” cast and crew are scattered across the globe, like Costa and multiple actors in the Netherlands. Eicher said while having cast abroad makes communication among staff complicated, it adds an exciting and fast-paced element to their creating process because of the unconventional work environment.

The podcast’s listening demographic on Spotify and Apple Podcasts is even more international than the crew. According to the Anchor.fm podcast analytics Bonifant shared with The Beacon, the show has listeners in Canada, Australia, the United Kingdom, and Singapore. Eicher attributes the show’s global presence and diverse cast to the Outstanding Podcast Award at last year’s EVVYs.

“There are so many people working on the show,” Eicher said. “So it’s really nice to know that our work is paying off by reaching listeners in all different places too.”

In order for a submission to be nominated for the Outstanding Podcast Award, the EVVY Awards requires that the podcast be original and exclude personal references, according to the EVVY38 Submission Packet. Sophomore Diego Villarroel, assistant director of “The Haunted Hour,” said the quality and professionalism of the podcast were powerful assets during EVVY Awards nominations.

“Their story is quite well written and unique,” Villarroel said during a video interview. “Everyone is so close to each other that they act like a family.”

Although unexpected, Bonfiant said her team felt honored to win the first Outstanding Podcast Award. The team hopes to translate the energy into the upcoming season of “The Haunted Hour.”

“It’s really cool [winning an EVVY],” Eicher said. “We’re going to try and use this to our advantage and be more organized this year.”

During the first season of the show, most episodes were recorded, produced, and edited on a tight deadline of several weeks—a process that typically needs months of preparation. Now, Eicher said, they plan to pre-record episodes in advance of the season two premiere in January 2020.

“That will allow us to build up for the second season and also make sure it’s super finalized,” Eicher said.

Until “The Haunted Hour” airs next year, Bonifant hosts an independent podcast on WECB every Wednesday evening. “Ghost Story Roadtrip” features new guests every week and explores the horror stories of the guests’ hometowns.

“I’m from Raleigh, North Carolina so most of the lore I know of is from the South,” Bonifant said. “I think it will be really cool to see the ghost stories that other kids at Emerson grew up with.”