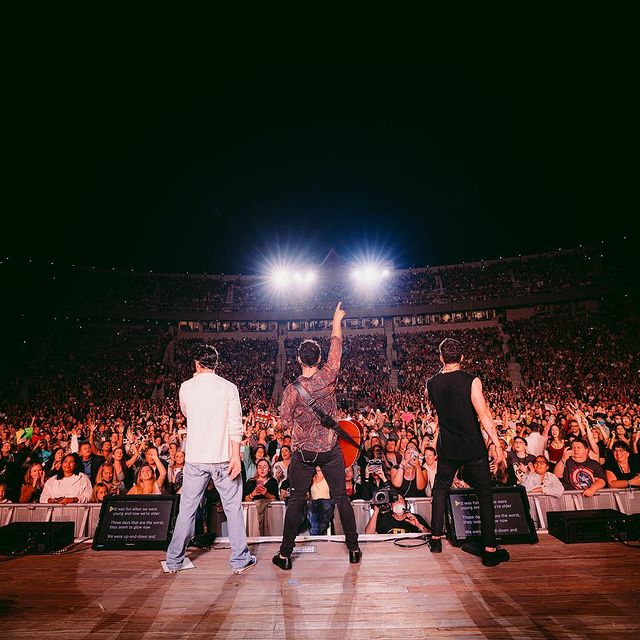 You don’t have to be a 12-year-old girl with the pitch of a hyena to be a Jonas Brothers fan, some of us are 19-year-old girls and our voices resemble the screams of a castrated goat.

The Jonas Brothers’ Friday show at Fenway Park, a stop on their “Remember This” tour, was filled with nostalgic anthems and popular songs from their solo careers.

The night kicked off with their opening act, Kelsea Ballerini, an American country pop singer-songwriter. Although not many people in the crowd seemed to know who she was at first, Ballerini did a great job entertaining the audience and making her music interactive. She was dressed head to toe in a blue sequin bodysuit that matched a bright blue eyeshadow, which looked fabulous on the monitor.

Although Ballerini is a stellar performer with a beautiful voice, I would argue that her music is much too somber for a crowd of over-caffeinated young people ready to rip our hair out at the sight of Nick Jonas.

After her set came to a close, middle-aged mothers, millennials in Camp Rock t-shirts, and college students that can’t let go of their childhoods came together for the Jo Bros. We started listening to the Jo Bros in granny panties and now, a decade later, we want to throw our lace thongs at them.

Once our three musketeers made their way to the stage, I lost my mind along with the rest of the crowd. It was like running into your childhood best friend and remembering how good you had it back then.

Nick was wearing an all white getup that, in my opinion, paid homage to his purity ring years. Joe was wearing the most colorful outfit because he needed to remind the audience that he was the main love interest in both Camp Rock 1 and 2, while Kevin looked incredible in a black suit, t-shirt, and vans—staying true to being ‘the funny one.’

It should be stated that there was no Kevin slander during any of his performances, in fact I would argue that he in many ways stole the show, despite being a Republican.

They opened with a single from their new album, “Happiness Begins,” and it was clear right away, by a lack of enthusiasm, that although we bought tickets for their new music, we were there for our childhood sweethearts.

They put on great performances of new songs, “Only Human” and “What A Man Gotta Do” that got the crowd to bob their heads, but thankfully they didn’t waste too much time before giving us what we came for.

As soon as the crowd heard the iconic electric guitar strum of their hit single “Burnin’ Up” on the speakers, it was like a thousand helium tanks burst in my eardrums. The crowd knew every word and as we screamed it to the top of our lungs, Kevin’s guitar solo gave me heartburn.

Their rendition of “Sweet Caroline” to a bunch of screeching Irish American Bostonians and a setlist filled with oldies but goodies like “S.O.S.” and ”Lovebug” made it clear that the Jonas Brothers know how to please their audience. It seems they are among a handful of former Disney stars like Miley Cyrus and Raven Symoné that have embraced those years and continued to pay homage to the songs that made them famous in the first place.

The show was relatively short––lasting about 90 minutes––but was filled with iconic moments.

Nick’s drum solo before singing two of his hit songs, “Close” and “Levels,” from his solo years was one of those moments. Anyone who spent a concerning amount of time online in 2008 remembers hearing that he has been playing the drums since he was three years old.

The moment Joe performed “Cake by the Ocean ” and “Toothbrush” from his time in the band DNCE, it sent me on a 2016 fever dream. I want Joe to eat my cake by the ocean. Better yet was the moment the crowd realized that although they were playing songs from their solo careers, the other members chimed in as backup anyway.

But, it was their gut-wrenching performance of “When You Look Me In The Eyes” that brought an embarrassing tear to my eye. During this song, a young woman on the stadium monitor was filmed with a message on her phone that read “My childhood dreams are coming true,” perfectly encapsulating the energy the Jonas Brothers brought to Fenway Park.

They ended their performance with two of their most popular songs, “Year 3000” and “Sucker,” which sent the crowd home feeling overwhelmed and wanting another 90 minutes of Kevin discreetly stripping away pieces of clothing.