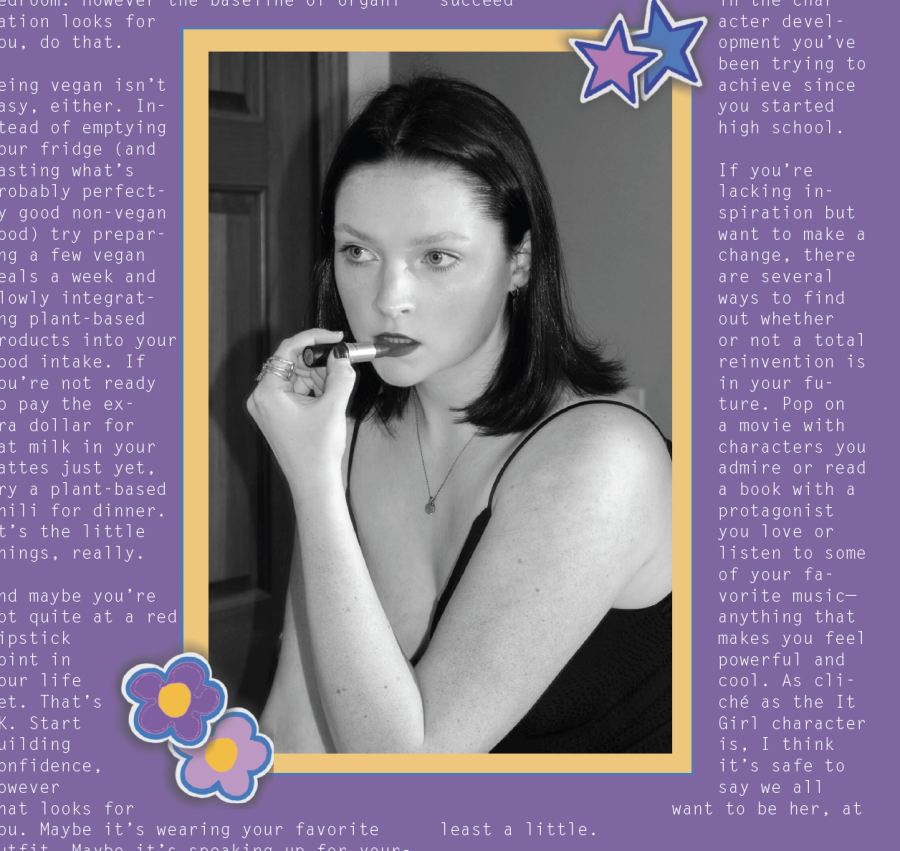 Every time Jan. 1 rapidly approaches, with it comes dozens of Instagram posts announcing fitness journeys, wardrobe purges, and a slew of other reformatory gauntlets disguised as New Year’s resolutions.

Some use resolutions to select and change an aspect of their lives each year, while others become too ambitious and eventually overwhelmed, sticking with their resolutions for only a few months or even days. But regardless of the New Year’s resolution success rate, Jan. 1 is the perfect time to take a stab at personal reinvention— in your wardrobe, exercise schedule, spending habits, general demeanor or, better yet, all of the above.

The way I see it, there are two possible results. Either the resolution maker succeeds in becoming the person they’ve always wanted to be, or they fail— along with most others— and try again next year. With potential outcomes so cut and dry, why limit yourself to fixing just one of your personal flaws?

Chances are you’ll stick with at least one of your resolutions, which is better than none. At the end of the day, the worst place you could possibly end up is right back where you started— and you were already there anyway, so there’s no harm in exploring somewhere new.

Hear me out: why not be an organized vegan who rocks a red lip?

Reinvention is not an easy process, but developing a clear image of who you’d like to be works wonders— both as motivation and as a reference point if you find yourself getting lost along the way. (That’s not to say you can’t change your mind. It’s your life, after all.)

Alas, becoming your best self isn’t as easy as creating a few Pinterest boards and calling it a day. You have to work towards your goals— that’s where the resolution part comes in. Use the New Year as an excuse to make as many resolutions as you want. Jan 1. plays a little trick on your brain, posing as a factory reset full of inspiration and drive.

One of the most important things to remember about New Year’s resolutions, especially when you’re making them yourself, is to do them at your own pace. Let’s revisit the idea of the organized, red-lip-rocking vegan.

This person obviously has their life together. They’re able to meal prep and they have the confidence to be bold. If you’re not quite there yet, your initial resolutions should match with where you are now. (Very few people can— or prefer to— go cold turkey on stuff like this.)

So, start by organizing a room of your apartment or a drawer of your vanity. Maybe that means throwing away all the expired makeup products you can’t seem to get rid of. Maybe it means vacuuming, sweeping, and doing a deep clean of your bedroom. However the baseline of organization looks for you, do that.

Being vegan isn’t easy, either. Instead of emptying your fridge (and wasting what’s probably perfectly good non-vegan food) try preparing a few vegan meals a week and slowly integrating plant-based products into your food intake. If you’re not ready to pay the extra dollar for oat milk in your lattes just yet, try a plant-based chili for dinner. It’s the little things, really.

And maybe you’re not quite at a red lipstick point in your life yet. That’s OK. Start building confidence, however that looks for you. Maybe it’s wearing your favorite outfit. Maybe it’s speaking up for yourself when someone interrupts you. Maybe it’s swapping, “sorry I’m late” with, “thanks for waiting.

These little changes can last as long as you need them to— whether that’s the first week of January or mid-March. Part of the reason resolutions aren’t successful is because they simply move too fast, without allowing time for the resolution maker to make adjustments. Doing your New Year’s resolutions at your own pace is the most foolproof way to succeed in the character development you’ve been trying to achieve since you started high school.

If you’re lacking inspiration but want to make a change, there are several ways to find out whether or not a total reinvention is in your future. Pop on a movie with characters you admire or read a book with a protagonist you love or listen to some of your favorite music— anything that makes you feel powerful and cool. As cliché as the It Girl character is, I think it’s safe to say we all want to be her, at least a little.

So, maybe this January is your time to make a change. It might come in the form of a new lipstick, a trip to the gym, or a few chapters of a new book. Whatever it is, seize the day— and each one after— and any opportunities for change it may present.