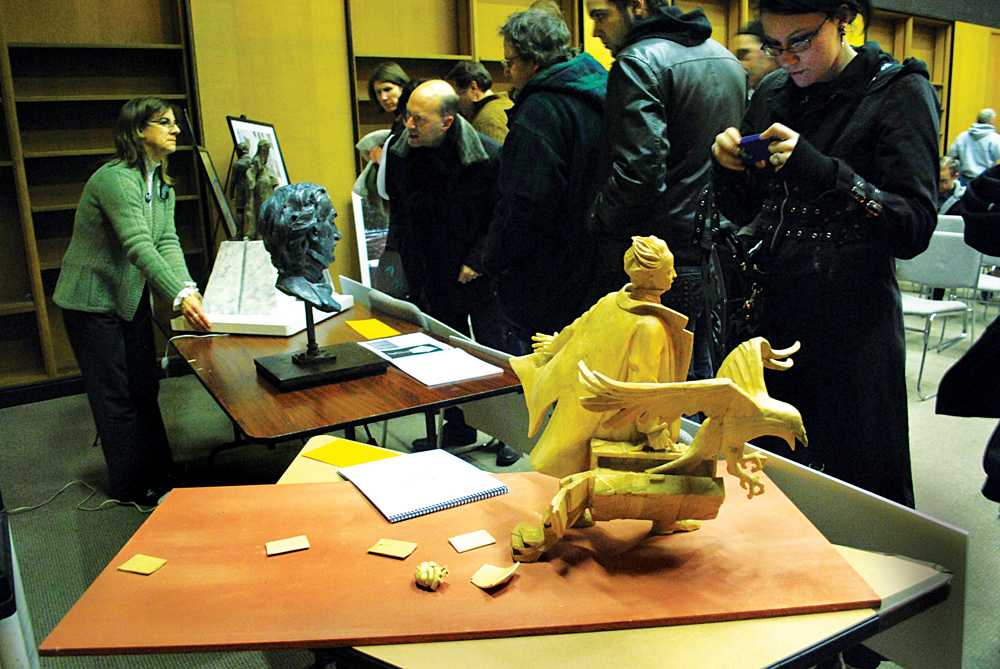 You might not think of Edgar Allan Poe when eating Boloco at the corner of Boylston and Charles Street. But soon Boston’s own grandfather of goth may dominate this plot of bricks that bears his name.

Last Thursday, the Edgar Allan Poe Foundation of Boston held Poe’s 203rd birthday celebration at the Boston Public Library and detailed plans for the construction of a memorial at Boylston and Charles streets. The site was named Poe Square in 2009 to commemorate the writer’s bicentennial just blocks away from where Poe was born in 1809.

Two hundred sixty-five artists from 42 states and 13 countries sought consideration to design the monument. From this pool, a review committee has now selected three finalists. In next few months, the committee will choose the final design.

Project manager Jean Mineo presented the three finalists at the event. The review committee encourages public feedback on the designs, and encourages people to share their thoughts on the Poe Square Public Artwork Public Forum blog. Interested Bostonians can also vote for their favorites through the month of February in the shop at 160 Boylston St., which is run by Poe Foundation Treasurer and 1944 Emerson College alum Pat Bartevian.

Sculptor Stefanie Rocknak designed a life-size statue of Poe walking toward Carver Street. The author’s iconic raven bursts from his suitcase, and he trails papers on the ground behind him, engraved with excerpts from his works. The statue, colored gray with black streaks, has a ghostly appearance, reflecting the gloomy tone and supernatural elements of Poe’s works. A sense of whimsy and imagination, both in the design and in Poe’s facial expression, complements the piece’s darkness.

“His ideas are jumping off the page and cascading out of his trunk,” Rocknak said.

Rocknak also planned for future expansion of the memorial in her proposal. She suggests that figures of the eponymous feline from “The Black Cat” and Fortunato from “The Cask of Amontillado,”  two of Poe’s best known literary creations, could be added at a later date, funds permitting.

Together, sculptor Ann Hirsch and architect Robert Olson have proposed a more stark and abstract monument for Poe Square. Poe’s face, meticulously detailed, conveys a sense of harsh realism and personal tragedy. The life-size figure of Poe stands on a platform, back to back with a shrouded woman. This figure represents the many women that Poe loved and lost in his lifetime, and their impact on his work. The woman’s ambiguity and Poe’s wondering facial expression are also a nod to Poe’s love of mystery.

“He’s inviting us to solve puzzles,” Hirsch and Olson wrote in their statement.

The final design, proposed by artist Jennifer Bonner and architect Christian Stayner, deviates from sculpture and instead honors Poe through architecture. “‘Tis the wind and nothing more” is a pavilion that memorializes the author through both function and aesthetic beauty. The prism-like steel and glass structure provides a uniquely modern take on Poe’s legacy and, according to the artists, “avoids the cartoonish kitsch that is embedded in representational monuments.”

Bonner and Stayner intend “‘Tis the Wind” to serve as a gift shop, offering various Poe memorabilia for sale. It would also serve as a meeting place for Poe-related gatherings in Boston, such as the historical walking tours.

Paul Lewis, chairman of the Poe Foundation, spoke at the event on the need to commemorate Poe in Boston. Lewis considers Poe “a national treasure” and thinks it is only natural for him to be honored in the city of his birth.

“Boston does not pay enough attention to its literary heritage,” Lewis said.

“He called them the croaking frogs,” Bartevian said, noting that Poe’s contemporaries didn’t recognize the progressiveness and innovation of his work.

With the construction of the memorial, Poe may finally be getting the Bostonian recognition he lacked during his lifetime.

Correction: Due to a reporting error, an earlier version of this article said the review committee preferred one of the choices for the monument. A representative from the committee said the judges do not have an official preference.