The Record Company, an affordable and accessible space for student musicians 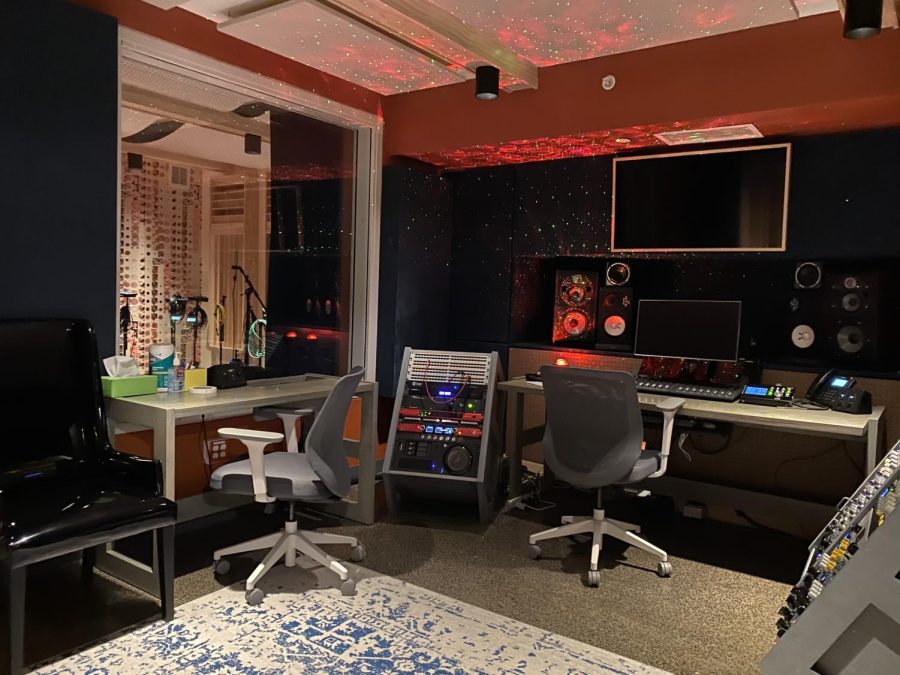 One of the recording spaces in The Record Company.

The Record Company, a non-profit, Boston-based studio, offers a vast selection of rehearsal and recording studios to Emerson students and the people of Boston alike.

The expansive building houses four fully equipped studios, a production suite, 14 rehearsal studios, and a community meeting space. Each hallway is lined with instruments, some donated and some purchased.

As a non-profit, donations made to TRC help extend their services to their community at low prices.

“If there’s a need for it in our inventory and someone has something in decent shape, we’ll usually take it,” said TRC Studio Manager Jamie Rowe.

As a city campus, Emerson does not have a comparable space for student musicians to practice. The prices are reduced to be affordable enough for each artist, and the locality of the studio adds to the overall charm.

Each of the four recording studios are built to fit the needs of the artist that might use it. Studio A, the largest of the four, is ideal for big bands and large groups that need the extra space. With two isolation booths, a large live room, and a current capacity of 20 people, it can be rented for four hours for $130.

Studio B can be used for a typical band, equipped with one isolation booth and a live room. It can be rented at $100 for four hours, with a current capacity of 10 people.

Containing a small isolation booth and live room, studios C and D are smaller, with a current capacity of six people at $65 for four hours.

“The thing that we’re always talking about here is just accessibility, and obviously that starts at a price point that is affordable,” Rowe said. “Being able to go into a professional recording studio at sixty-five dollars for four hours is something that’s unheard of.”

“People were really looking for more rehearsal opportunities and space to go out of their apartments and go make music,” Rowe said. “So we decided to do [more] rehearsal [studios].”

TRC had to be cautious with the space during the peak of the pandemic in Massachusetts. UV sanitation systems were installed into the HVAC systems of each room right before opening, and hand sanitizer pumps were placed around the building.

“We’ve definitely had to adapt some of our policies, too,” Rowe said. “This place is supposed to be a place for people to gather and meet each other, and with the current health situation, we have to ask people nicely to mostly spend time in their own room.”

As the pandemic eased in Boston, TRC saw more musicians coming out to practice for live performances. Rowe said it was heartening to see musicians return.

“Music is a very communal thing,” he said. “It gives people an opportunity to really engage in their art in a really serious and focused way.”

Open from 11 a.m. to 1 a.m, the flexible hours allow students to work around their schedules to use TRC’s facilities. The equipment is readily available to everyone.

To remind each customer of this expectation, the company’s motto is on display at the front door and plastered around the studio.

“We have a sign out front that says ‘no heroes, no assholes,’ and that’s one of our internal slogans so for us it’s kind of our customer service mentality,” he said. “We’re nothing special for operating this space, we’re simply here to help, and you’re just like all of us when you come in. We’re all in this together.”

Audio supervisor Stuart Beacham of Emerson College’s Office of the Arts used their old space in 2016 but continues to hold TRC in high regard.

“If I had another project that I needed studio space for, they would be at the top of my list for places to look for availability,” he said.

Beacham used the space with a handful of other musicians to record a small project in Studio A. Although it was on an elevated floor at the time, he described the space as “easily accessible.”

“I was pretty much able to come in and just hit the ground running,” Beacham said. “I know in some spaces it kind of takes a little while to get used to where everything is, how everything’s set up and how everything’s routed and it was actually pretty easy based on how the space was set up to just get in and start.”

The affordability creates a space for students to gather and be creative without needing a sound engineer or an assistant.

“They’re priced very much for projects, for students, for people who just need a little bit of time in a studio and don’t necessarily need to book days,” said Beacham.

Beacham recommends the space to anyone looking to work on recording projects and other musical endeavors of their own.

“I’ve seen pictures of their new space and it looks pretty nice,” he said. “The facility was great, the people there were good to work with, and [the project] went pretty smoothly.”

Rowe, along with all of TRC’s staff, encourages students to come and try out their space. Booking is easy—reservations can be made at any time on their website for any of the studios.

“[We] allow you to venture out and try something new in a high quality space,” Rowe said. “It is harder and harder for students in Boston to find space that they can do what they want so even having access to a [studio] allows your ears to develop in a better way.”