The spark of a climate revolution 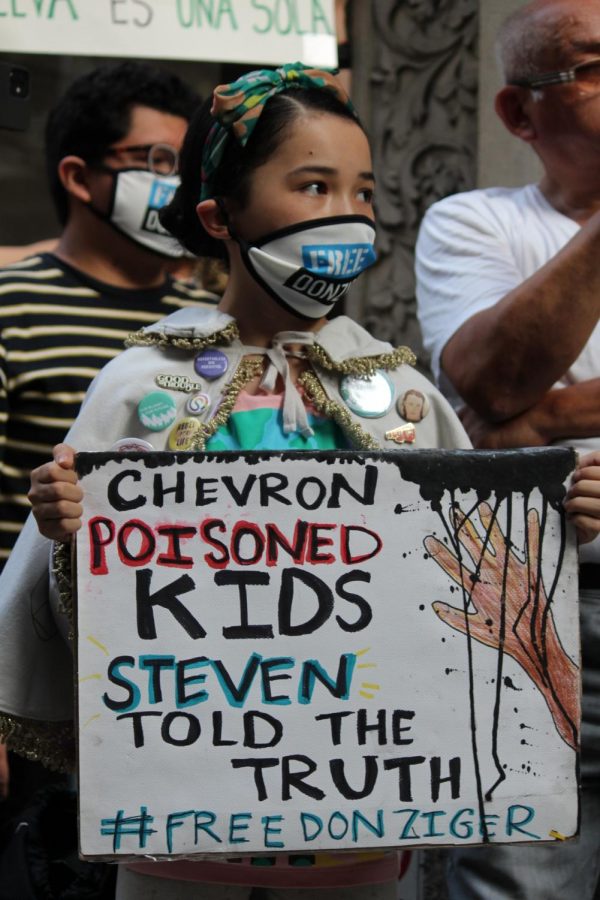 Over the course of the past 20 years, Chevron Corporation, the second-largest oil company in America, has spent billions of dollars trying to silence those who have opposed them and their practices.

Steven Donziger is the environmental lawyer who led the largest environmental case in history against Chevron, notably for dumping over 16 billion gallons of oil into the Ecuadorian Amazon.

According to over 100 expert reports and field inspections, the company- formerly known as Texaco- poisoned the land and water that 30,000 Ecuadorians depended on for survival. This had led to the cancerous deaths of over 2,000 natives.

Chevron should be paying for their heinous crimes against these communities, while individuals like Donziger should be recognized for the legal justice within their work. Accountability and recognition are key factors when it comes to bringing forth change.

Has Chevron paid these natives back? No, but they have spent billions of dollars in an effort to silence Donziger. Further, they have forced him under house arrest for the past 2 years..

On August 12, after nearly 2 years under house arrest, in a trial without a jury, Judge Lewis Kaplan found Donziger guilty of bribery and fraud. Kaplan, also a former corporate lawyer who held financial investments in Chevron at the time, ordered Donziger to overturn all evidence.

When the environmental lawyer refused to do so, he was charged with six counts of criminal contempt (equal to a misdemeanor charge). If Donziger had complied with the order it would have put all of his clients at risk.

For choosing to protect his clients he was placed under house arrest while awaiting a verdict for the contempt case, something completely unprecedented.

“I never thought a house arrest would happen,” Donziger said. “It didn’t even really occur to me since this had never happened before in American history to a lawyer on a misdemeanor. Once it happened I was shocked. I thought it would only last a few days until I got a lawyer to petition the court.”

The longest sentence for his crime was 90 days. This ongoing house arrest has lasted 760 days.

Judge Kaplan hand-selected the judge and picked the private prosecutors who would oversee Donziger’s contempt case. This included District Judge Loretta Preska, who has served on the advisory board of the Federalist Society, to which Chevron has been a significant donor. The three prosecutors that Kaplan also appointed at the time were members of a law firm which represented Chevron in the past.

Donziger and his team are appealing the guilty verdict. This process has gained support and attention throughout congress and the rest of the world.

This call for justice has been echoed through Donziger’s team, advocacy groups, celebrities like Susan Serandon and Roger Waters, and members of Congress. Xander Tilliou, a senior VMA student at Emerson, has worked closely with Donziger as his assistant throughout his fight for his freedom. Tillou stated that his seven-day workweek schedule has led him to develop a close relationship working with Donziger.

“We have gotten incredibly close and it does become more difficult as his sentencing date in October approaches,” Tillou said. “I view him both as a mentor and a colleague, which is a pretty special relationship.”

Tillou has spent average workdays helping to create tweets for Donziger’s Twitter page. It has compiled over 79k followers and has helped to organize rallies.

The most recent protests unfolded on August 6th which marked his two-year anniversary of being on house arrest. Citizens from 18 major cities in the US, as well as other countries like Israel and Canada, joined the rallies in solidarity with Steven.

Tillou led the protest in Copley Square in Boston, which he described as a great, yet disheartening experience.

“Getting people’s attention and bringing them in to learn more felt really good,” Tillou said. “But it’s also a crazy thing when you see a lot of people that will just walk the other way.

A lot of people don’t like to engage or think about these things because it’s so far from them—because we’re in the comfort and safety of this completely different part of the world.”

However, Donziger says the rallies were a very encouraging and emotional experience, but it is important to know what they are really representing.

“It is a mistake to think that it was all on my behalf. It goes way beyond me and it affects everyone who does this work,” Donziger said.  “It even affects the very nature of our society, and I think that’s why we’re seeing a tremendous outpour of support. Because I’ve become a symbol of something very dangerous for the United States of America, which is corporate control and corporate silencing of advocacy in such a way that accelerates the destruction of the planet.”

Before being put on his pre-trial probation, Donziger originally traveled to Ecuador in the 1990s to investigate the horrors taking place firsthand, after hearing about them through a mutual friend from law school. When he arrived, it was beyond comprehension.

“It was an apocalyptic nightmare,” Donziger said in an interview with The Beacon. “The worst part was that it was not an accidental spill. It was the product of a deliberate operational design engineered by Texaco. The whole system was designed to pollute so that Texaco and its shareholders could save two to three bucks a barrel, at the cost of poisoning an entire area and rainforest.”

The moment he saw the pools of oil, he knew he couldn’t turn his back. He flew to Ecuador over 250 times within this 20 year battle for justice. Developing both personal and professional relationships was a large part of this community-driven fight.

“The leadership of the communities was vital,” Donziger said. “This wasn’t a lawyer-driven lawsuit; it was a community-based one, and my role was to honor my service to them and not control the lawsuit.”

He explained that his role was also to try and empower the communities to use the law in a productive way, to right the horrors that had been done to them.”

As Donziger and his team battled Chevron’s lawyers, they peeled away at the layers of corruption within the case. They were fighting against individuals who sold their morals to a corporate company.

“There are a lot of Chevron lawyers who I think have sold their ethics for money to defend a major human rights violator,” Donziger said. “As for the Ecuadorians working for Chevron, they are basically fighting their fellow citizens who are having their cultures destroyed by the pollution. It’s these civilizations that are threatened with extinction. A lot of these lawyers are engaged in corrupt practices, thinking they can get away with it because they get paid to do it by Chevron. I saw it with my own eyes.”

In 2011, Donziger and his team won a $9.5 billion judgment against Chevron to hold the oil company accountable for their actions. But what has the company paid back to the people of Ecuador? Not a dollar’s worth.

What Chevron has done instead is pay billions of dollars to over 60 law firms, over 2,000 lawyers in an effort to take down Donziger and his team. This had led to Donziger being placed on house arrest in 2019 with the help of a corrupt judicial system, ultimately controlled by a masked oil giant.

Donziger said some days on house arrest are easier than others, but his fight is a constant uphill battle. The most difficult part about this entire case is having his freedom stripped away.

“It is the lack of freedom,” Donziger said. “I can’t leave. I can’t work. I can’t think straight. I can’t be a father. I can’t be a husband. I can’t plan the future. Nothing is normal. Everything in your life gets assumed to be the work of trying to end it.”

Tillou stated that the constant support stemming from the public is the key to the Free Donziger movement.

“It’s very multifaceted what gets him out of bed in the morning, but seeing support in the movement definitely contributes to it,” Tillou said.

Throughout his probation, Donziger has friends in Ecuador who have died from cancer—indigenous people who he was not given the chance to say goodbye. These are a few out of the thousands of others who have died from the contamination.

“If I could [say one thing to them] I would say that I hope your sacrifice was not in vain, and we end up collecting the judgment so those under threat can lead normal, healthy, and dignified lives in a safe ecosystem,” Donziger said.

Donziger is the spark of hope that has ignited a climate revolution— one that has the potential to set a precedent for the fossil fuel industry, as well as address the corporate control within the judicial system. The people of Ecuador have not been paid any money back, of the $9.5 billion owed, and it is time that we hold Chevron accountable.

To learn more, donate, and contribute to the movement,