The struggle to socialize in a year of separation 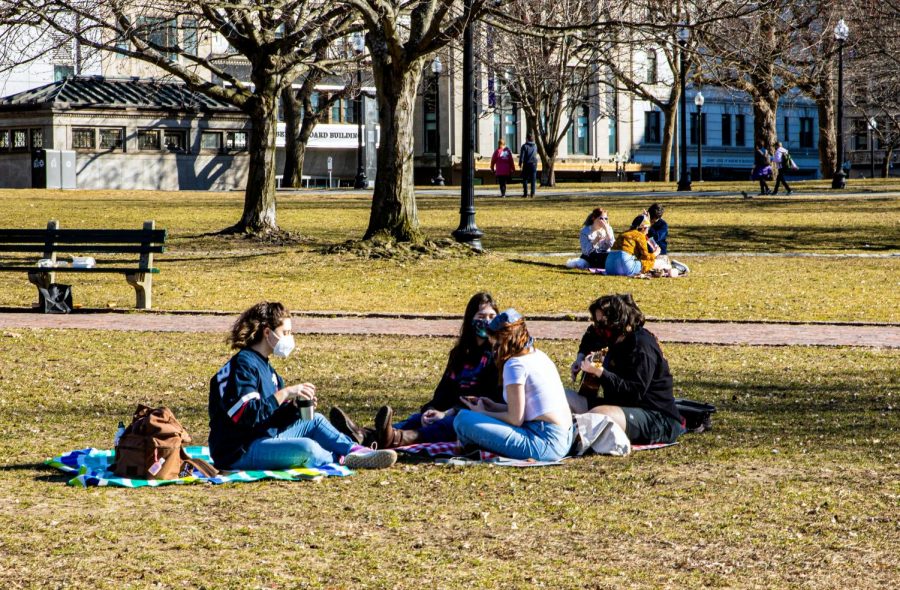 By Dana Gerber and Alec Klusza

In the first semester of his sophomore year, junior visual and media arts major Devin Elias went to parties every other weekend and met with friends to watch horror movies once a week.

Now, in light of the social distancing measures instituted at the college, local, and state levels to curb COVID-19 infections, Elias regularly attends parties from the confines of his off-campus apartment over Zoom.

The now-ubiquitous video conferencing platform houses everything from Elias’ weekly horror movie viewings to his Among Us or Jackbox game nights, and to his PowerPoint parties, where each participant takes a unique prompt to create and present a slideshow.

Despite his creative use of technology, Elias said he can’t help but feel like something is missing.

“I kind of feel like I’ve lost a year of social life,” Elias said. “It’s much better to hang out with people in person.”

“I think the biggest impact is the loneliness factor,” Dr. Marcia Morris, a psychiatrist at the University of Florida with a focus on mental illness in college students, said. “One aspect of college we don’t talk enough about is that social aspect and the social development of young adults. And that to me is just as important as the academic development.”

In a survey conducted in Nov. 2020 by Emerson’s Institutional Research, just 65 percent of the 1,781 students who responded reported feeling “successful” or “somewhat successful” at making or maintaining connections with other Emerson students.

“It’s definitely been weird,” Lauren Hodgkins, a first-year theatre design/technology major, said. “I’m not used to having to communicate mostly over technology rather than in person. It’s been kind of hard to make deeper connections with people—the lack of personal connection that you get just through a screen versus face-to-face, which I feel is a lot more intimate.”

Some students, like Elias, have found ways to recreate their social lives in a virtual format over the past year. First-year communication studies major Giana Carrozza said she made a good friend at the college through a “matchmaking survey” organized by the college.

“[The college has] done a good job of providing activities for people to go [to],” Carrozza said. “My RA is doing a lot of cute little get-togethers that you can join, like plant parenting.”

“It’s been a lifeline,” she said. “My message to young adults would be, as we go through this pandemic and hopefully recover from it, continue to connect with others—whether it’s face-to-face or social media.”

William Hutton, a senior visual and media arts major, started having virtual game nights over Discord, an instant messaging program, with his friends to mitigate the lack of human interaction.

“I posted on my Instagram, ‘Let me know if you’re interested,’” Hutton said. “We did have up to 15 to 16 people in the Discord server at one time, everyone just kind of hanging out. Some of us drinking, some of us not.”

The online hang-outs became a medium to reconnect with old friends, Hutton said, as well as an opportunity to make new ones.

“I’ve moved around in my life a lot and I have a lot of friends from a bunch of different places,” he said. “These people who wouldn’t have met each other are becoming friends—and we’re all getting drunk together.”

The online platform provides a level of socialization Hutton said he might not have broached offline.

“It lowers those social barriers in a way,” Hutton said. “People that I had never spoken to at a house party—I’m a naturally anxious person—I probably wouldn’t have approached them unless they approached me first. But in Discord, I can just talk and people will hear me regardless.”

For some, the effects of Zoom fatigue—a phenomenon The New York Times blames on the awkwardness of technology and lack of non-verbal cues—are draining. That’s why Elias has lunch face-to-face with two of his friends every Monday. They book an on-campus room, alternate eating so only one person is ever unmasked at a time, and sit far apart.

“I really, really need that,” Elias said. “Zoom is convenient, but I feel like you really need in-person hangouts, too.”

Emma Shacochis, a sophomore writing, literature, and publishing student, said making friends during class is still possible even with the hybrid learning style.

“Weirdly enough, breakout rooms have helped—maybe not necessarily [to] make friends, but [they] create the bond between classmates that was much easier in person,” she said. “People I know if they hang out with someone, they’ll just go to a public space.”

Ryan Rosenthal, a sophomore theater and performance major, said it’s been easier to maintain friendships rather than develop new ones.

“I made my friends last year, and I kind of just kept them,” he said. “I live in an eight-person suite. So, for the most part, we’re all together.”

Dr. Morris said despite the social isolation that has accumulated over the past year, she believes the release from it will be remarkable.

“After the Spanish flu pandemic of 1918, we had the roaring 20s where there was more socialization, more partying among young people, which is totally understandable,” Dr. Morris said. “I hope there’s more fun when this ends and more connection. People are going to appreciate it and, hopefully, be more kind to others.”