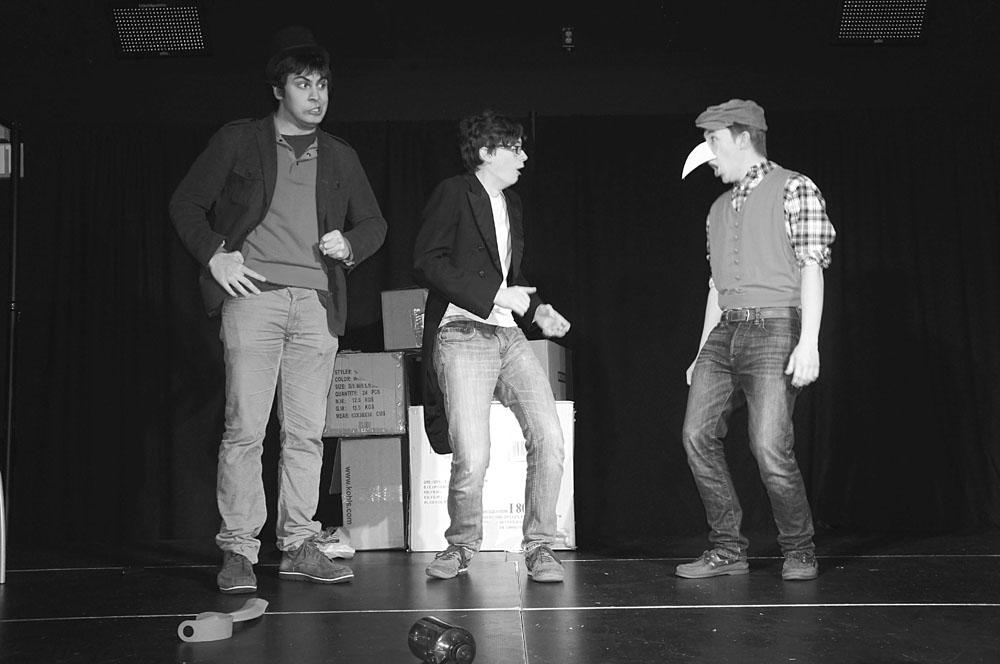 Edgar Allan Poe said, “There is an eloquence in true enthusiasm.”

Chocolate Cake City’s presentation Friday of The Incomplete Works of Edgar Allan Poe blended murder, madness, and humor during the hour-long performance in the Cabaret.

The opening monologue featured Ian Cardoni as the master of the macabre. In his tousled, black wig, overcoat, and skinny jeans, Cardoni’s impersonation of Poe had the audience laughing from his first tightly pursed, “Hello.”

The evening was colored by some of Poe’s most famous works, such as “The Black Cat,” “The Tell-Tale Heart,” and “The Cask of Amantillado.”

In Poe’s “Cask of Amontillado,” Montresor  murders Fortunato by sealing him within a wall and leaving him to die of starvation.

In the troupe’s rendition of  “Cask of Amontillado,” Montresor (Arthur Hickman) and Fortunato (Kevin McCarthy) depicted two high-school English teachers who just can’t seem to agree:  Is Amontillado pronounced with a hard ‘L’? Furious, Montresor coerces the dim-witted Fortunato to chain himself up in the human sized hole in the wall, declaring that the ultimate result will determine who’s right.

The troupe has had experience adapting comedy shows from dark material. Previously, they put together  Human Centipede: The Musical and a sketch show based off the Twilight Zone.

“We just really like adding levity to dark stories,” Robbie Goodwin, a 2013 visual and media major, said in a phone interview.

Although it is hard to image how the merger of morbidity and slapstick can be successful, members of the troupe take this twisted task as a challenge.

“It’s a lot of work,” said cast member Stevie Palmer. “It’s not always funny. Sometimes it just doesn’t work, but we come together as a group and we revise and we rewrite, and the combination of that produces these really fun scripts.”

“Edgar Allen Poe FanFiction,” a sketch written by junior visual and media arts major Maggie Monahan, garnered some of the night’s biggest laughs. The story wove Poe’s classic grisly tales with the atmosphere of a late-night reading of Danielle Steele.

A sexually frustrated female is visited in the night by a man with one hollowed out, festering eye. Roger Ouellette, who played the disfigured man, laughed when discussing this innuendo-filled scene in an interview.

The Chocolate Cake City cast had some big shoes to fill when the time came to showcase the most famous work by Poe, his portrait of a lovelorn man’s descent into madness, “The Raven.”

“It was difficult,” Palmer recalled. “So much of what happens in the story is all going on in his head. There isn’t a lot of action, so we had to create that somehow.”

The group added some energy to the tale by adapting it as a wacky sitcom plot — complete with a sign prompting the audience when to clap. The unnamed narrator calls into work saying his son is ill, but panics when he learns that his boss is on his way to validate this story. Caught in a lie (he has no child), the narrator persuades the Raven, played by Forrest Tiffany, to pose as his son.

The troupe went all-out with stereotypical sitcom puns, catch phrases, and physical humor, all nestled within this typically terrifying tale. The applause at the scene’s end had nothing to do with the clap sign.

As the show came to a close, Poe returned to the stage one final time. The Raven was quoted “nevermore.”