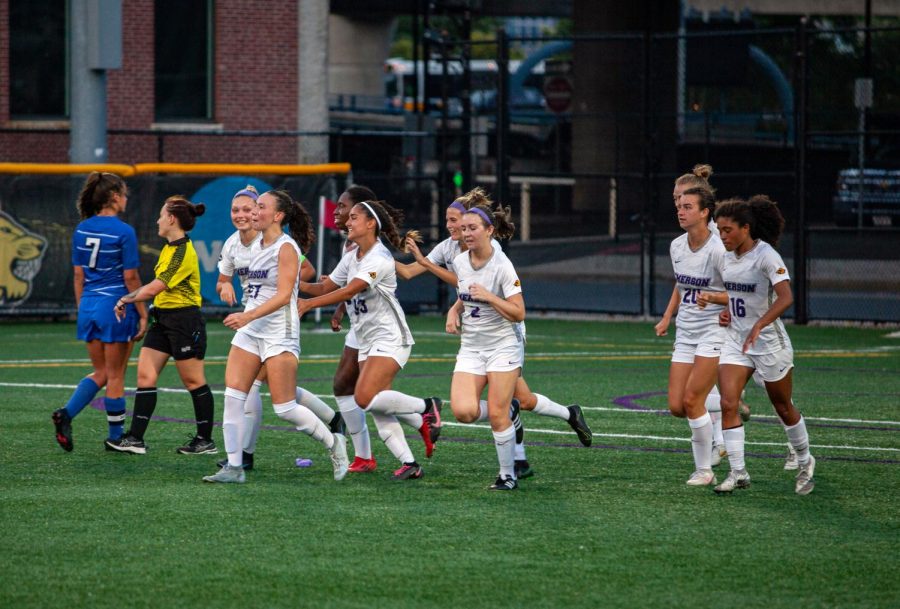 The women’s soccer team extended their win streak into a third game on Wednesday with a 4-1 victory over Saint Joseph’s College of Maine at Rotch Field.

Within the first minute of the game, the team was already on the attack—getting the ball into the box, but ultimately failing to score on that possession.

The Lions came out of the gates securing the majority of the possession and winning the ball up the field frequently; thus, putting themselves in better scoring positions. Two free kicks in striking distance were awarded to Emerson before the clock said 35 minutes left in the first half—one missed wide and the other was saved by the St. Joseph goalkeeper.

High intensity and pressure was the name of the game for the Lions as they set the tempo for the majority of the game. Head Coach, David Suvak, made sure that the game plan was exactly that.

“The game was really about us and us performing well for a full 90 minutes,” Suvak said in a postgame interview. “It really had to do with passing, playmaking, and combinations through all thirds of the field and keeping possession, as we moved the ball around.”

The Lions were playing the ball down the wings and sending balls into the middle of the pitch. Sophomore winger, Gina Lukoskie, said that this was a part of their game plan.

“Our whole plan really is just to possess the ball in the middle and then get out wide and cross the ball and hopefully finish,” she said in a post game interview.

Despite the intensity and pressure from the Lions, St. Joseph was first to strike after a dribbler found its way to the back of the net off the boot of Madison Michaud 16 minutes into the game. This would be the only shot that St. Josephs would take the entire first half.

This did not stop Emerson from trying to get right back into the match as they kept their high tempo and aggressive style. The Lions were awarded seven corners and took nine shots in just the first half. Two of those shots found the back of the net.

After a deflection and shot saved by the St. Joseph’s goalkeeper, Lukoskie, buried the ball to equalize the score with 12 minutes left in the half.

“There was a lot of chaos in the box and I was lucky that I was able to slot it through and get it in the goal,” Lukoskie said.

Following the equalizer, the team continued to press the gas pedal. First-year midfielder, Madeline Khaw, centered the ball into the box for first-year Defender, Alianna West-Rodrigues.

West-Rodrigues took the shot and after a missed play by the St. Joseph’s defender, the ball crossed the line and the Lions were awarded the lead.

The Lions went into halftime with a one goal lead over the Monks—giving the team a sense of security.

“It brings a certain level of comfort to the team and understanding that the game is moving in the right direction,” Suvak said. “We still have another 45 minutes but it’s important that they are fighting and scoring goals, and they want to continue that fight.”

The calm of having an advantage didn’t change the fact that the Lions wanted to add onto their lead. A saved shot at the beginning of the half netted the Lions a corner. After the ball was sent into the box, St. Joseph’s would end up laying a hand on the ball, resulting in a penalty kick for Emerson.

Khaw lined up at the penalty spot and shot to the left side of the keeper, placing the ball in the right side of the net in the 45th minute.

The Lions would continue to play the rest of the second half with the confidence and comfort of their now two-goal advantage.

St. Joseph made strides to get back into the game, but changing to an aggressive style resulted in more fouls as they tried to win the ball from the Lions.

“In my estimation we had better possession of the ball and I think that can be frustrating but I think our team was working hard and competing,” Suvak said. “I just think there were hard battles out there.”

Towards the back-end of the game, St. Joseph’s started pressing the ball and creating chances up the field. Just when they were starting to put shots on target against the Lions, first-year midfielder, Katie Wojick, put the game to bed with a goal in the 86th minute of the game.

The Lions look to continue the high scoring efforts in their next game this Saturday versus Brandeis University. It will be held at 1 p.m at Rotch Field.

“We have struggled with scoring goals and we have been working very hard,” Suvak said. “I think we saw some really positive things tonight. So we’re gonna continue to do that because you know you need to score and it looks like we have some players that are threatening. We have speed, we have technical kids, and we’re gonna continue to work on that because we have tough games coming up.”