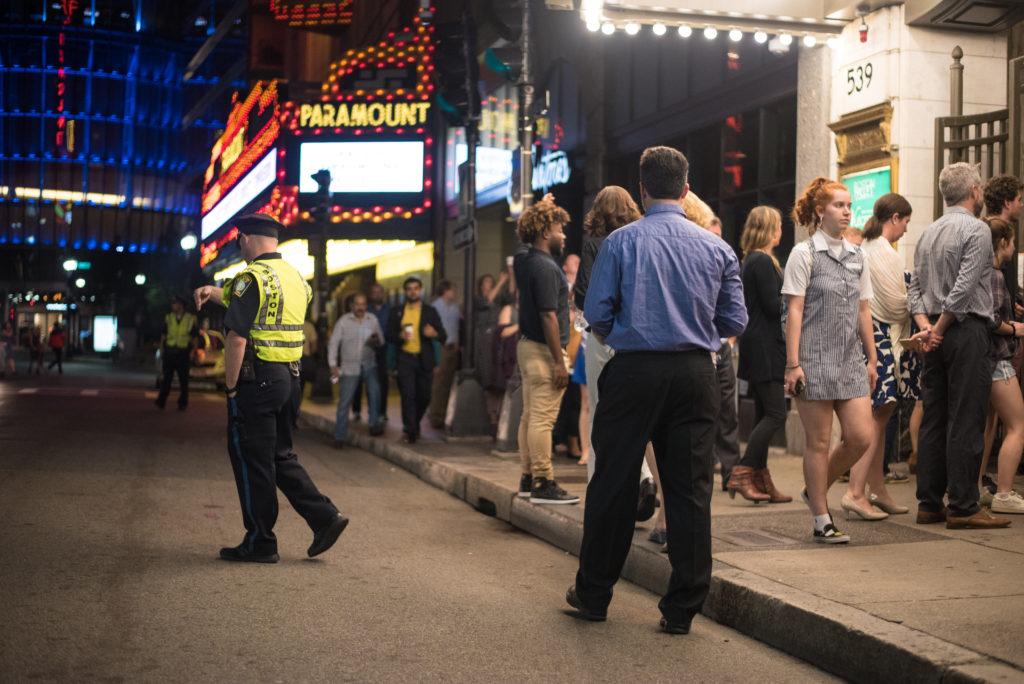 The Emerson Colonial Theatre premiered “Moulin Rouge! The Musical” this summer, and brought hundreds of theater guests to Boylston Street. Now, with classes in session, students must dodge these matinee crowds to access campus buildings.

The offices of Campus Life, Campus Services, and the Emerson College Police Department meet with Ambassador Theatre Group representatives once a month to discuss details of their partnership in regards to the theatre and how each department can cooperate. This month, the college representatives spoke about managing sidewalk traffic on Boylston Street during events held at the newly restored 118-year-old Colonial Theatre.

“Moulin Rouge was a huge hit,” Pollock said. “It was a pre-broadway, and they had crowds like they won’t have for probably like any of their other shows for the rest of this year.”

“It’s much easier controlling the crowd going in than it is coming out,” Pollock said. “So we’re going to have those discussions going further, in the future. It’s going to be an ongoing challenge.

On Oct. 1, during Monday classes, the Forbes Under 30 Summit held panels throughout the day in the Colonial Theatre.

Junior Katharine Rhee compared the crowd in front of the theatre to the busy lines of Whisky Saigon, a nightclub next door to the historic theatre.

“There were just rushes of people, students were unable to get through this whole crowd,” she said.  “I was late to class a number of times, trying to get through events that I had not attended.”

Senior Connor Wolff also attended the Forbes Under 30 Summit. Wolff said he had to walk around the sidewalk as crowds piled up on the streets before and after the Forbes panels.

“People were just walking in and out, it wasn’t like they were trying to control the flow of traffic or anything,” Wolff said.

“It’s not so much like Emerson-only events, but there are events that are open to the public. That’s when it gets bad,” Baltazar said, “Because a lot of people will stand by the street, especially when it’s over.”

She said since her residence hall neighbors are both the Paramount Center and the Boston Opera House, sometimes the two theaters play shows at the same time and it is impossible to get through the crowds.

Baltazar also lived in Paramount last year. She said the events have not affected her ability to get to classes because the shows are usually later in the day,  but she knows students who do have evening classes, and the number of people in front of her building still impact her daily routine.

“It’s very frustrating to get through because occasionally we have to walk on the actual street, which isn’t really that bad because of the way it’s set up, but it’s still frustrating,” Baltazar said.

Pollock said in a phone interview that the Paramount Center has lobbies on the first and second floor to hold guests and lines.

“Nothing has been really done because there are not really lines outside of the [Paramount] Theatre,” Pollock said.

The Broadway blockbuster “Hamilton” opened at the Boston Opera House and is currently playing until November 18. The theater holds 2,667 seats and tickets for the hit musical quickly sell out.

Pollock added that the Paramount Center does not typically show matinees during the school year.

The Paramount Theatre holds about 740 seats when accounting for the Robert J. Orchard Stage and the Jackie Liebergott Black Box Theatre. The Colonial Theatre doubles that amount with 1,700 seats.

ECPD was not present at the second meeting between the college and ATG, but Chief Robert Smith said he discussed the possibility of stationing officers at the entrance of the ECPD office during busy nights at the Colonial Theatre. This would ensure students’ access to the office when lines begin to block the ECPD and the Barnes & Noble at Emerson entrance, Smith said.

“We want to make things convenient for [Colonial Theatre] attendees, but not inconvenient for our students. This is still their campus,” Smith said.

Pollock said the next meeting with ATG and the college will be about preparing for the next Emerson Colonial Theatre matinee, “The Play That Goes Wrong.” The show will run for two weeks from Nov. 7 to Nov. 18 and will play every day except for Monday.

“It’s really a partnership. We own the building, [ATG] rents the building,” Pollock said in regards to the Colonial Theatre. “They’re responsible for their patrons, but we have to help them and they have to help us because we are in this community together.”