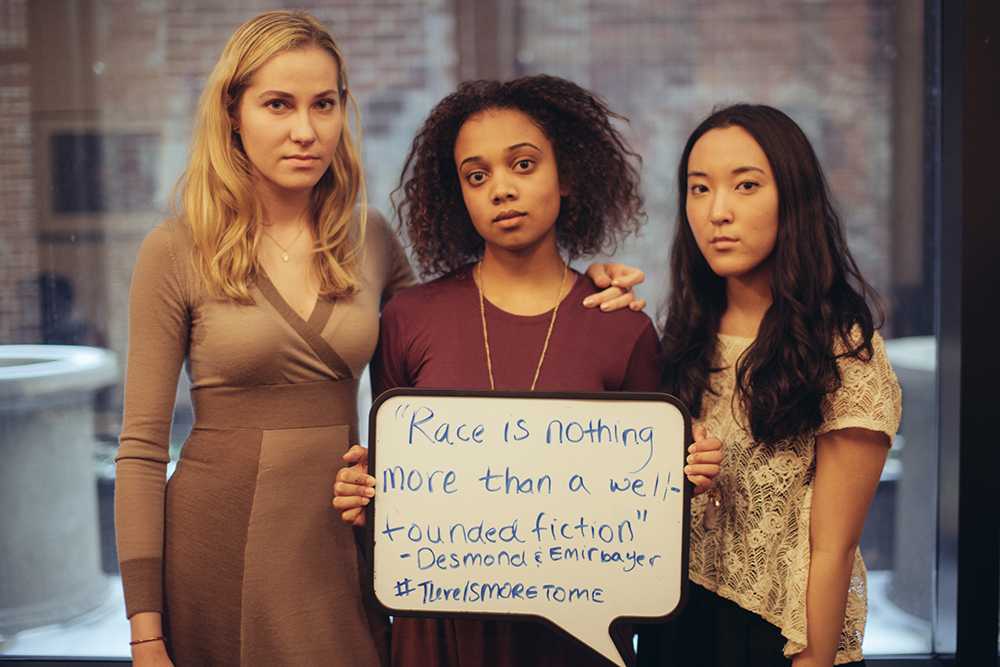 When scrolling through Emerson’s #ThereIsMoreToMe Tumblr page, students of every race, gender, age, and major are pictured holding whiteboards that read anything from “Stop asking me what I am. Ask me who I am,” to “I will not fulfill your racial fetish of a black man,” to “No, well-meaning white person, you cannot call me ‘my nigga.’”

This photo campaign was a part of freshmen Alexandria Ellison and Mona Moriya’s goal to create an ongoing dialogue regarding race on Emerson’s campus. By spotlighting microaggression, which Moriya defines as comments or statements that are not physically harming or blatantly racist but have very detrimental mental effects on a person over time, the pair wanted to prove that racism is a problem on campus.

“The culmination of [microaggression] makes you react,” Ellison, a political communication major, said. “That’s the thing about racism — we don’t see Emerson students wearing KKK masks—that’s not how racism has transformed over the years. Racism is something that’s very under the table and its not talked about.”

Moriya, a performing arts major, said she felt compelled to act after various interactions on campus such as being told that she was “pretty for an Asian girl” and seeing a boy in her orientation group pose for a photo in Chinatown by pulling at the edges of his eyes to insensitively mimic an Asian person’s eyes.

Ellison said she has heard comments in and out of class, such as a girl asking her why it was okay for black people to use the n-word, while white people couldn’t.

“Coming to Emerson was definitely a culture shock and it was anxiety-provoking because I just didn’t know how to handle all of it all at once,” Ellison said. “In the same token, I just felt very alienated because I didn’t think anyone else understood where I was coming from.”

Willie Burnley, a sophomore writing, literature, and publishing major, participated in both the photo shoot and the video component of #ThereIsMoreToMe. He said that he has faced both macro- and microaggressions on campus, including being approached at a party by someone who decided to express his awe at realizing just how bad slavery was.

“I just felt like saying, ‘Look, this is not a bonding thing for me, with you,’” Burnley said. “Me and the other person I was with realized that we were the only people of color at the party, and it took on a new dimension for us.”

Burnley said he was glad the #ThereIsMoreToMe movement has allowed students of color to discuss their experiences.

“There’s no national dialogue about this going on, in a comprehensive way at least,” he said. “These are conversations that people are having if their lives are being affected personally.”

Ellison said the photo shoot became more of a conversation starter. The members ended up taking solace in the community and their newfound ability to delve into their own personal experiences with racism not just on campus, but in America.

In terms of where they plan to take this movement, Moriya said that its Tumblr page is not enough, and the group is in the midst of planning events for next semester.

“This isn’t something that just happens once and is going to change the whole school,” Moriya said. “I think it’s something we have to work at for the rest of our time here.”

Along similar lines, Moriya and Ellison both said that bigger steps need to be taken on campus to address racial microaggressions.

“Race needs to be a conversation here at Emerson. It can’t just be a little workshop here and there facilitated by someone. It should be a required class,” Moriya said. “If someone doesn’t want to show up to a workshop or discussion about race, they’re not going to show up. But if it’s a class, it’s something that will really impact people’s lives.”