Third annual Out of the Darkness walk increases fundraising goal 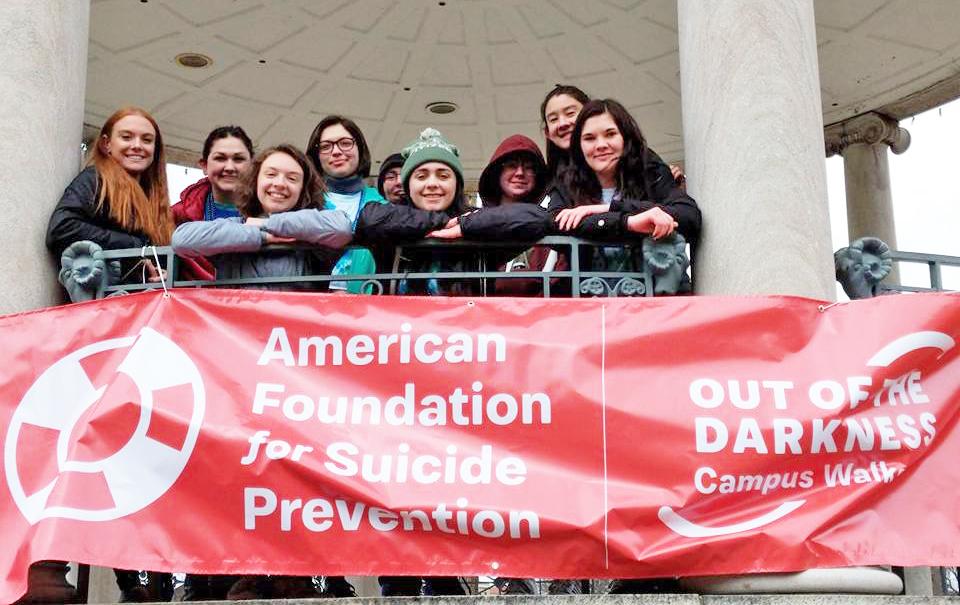 Students exceeded their fundraising goal of $12,000 at the 2018 Out of the Darkness walk. Photo courtesy of Emilia Filippone

Set back by depression and anxiety during his freshman year, junior Ben Nadler found himself struggling with his identity. He said there was a repeated thought in his head telling him, “You are not good enough.”

Nadler joined his friend Suzie Hicks ‘18, Emerson’s coordinator for the Out of the Darkness Walk at the time, at his lowest point two years ago to fundraise for the American Foundation for Suicide Prevention. Nadler will coordinate the walk’s third year at Emerson with junior Emilia Filippone, who was not available for an interview with the Beacon due to a personal reason.

“I’ve had some really good moments where I really learned a lot and have been able to learn how to take care of myself,” Nadler said. “And, as a result, it has made me a very big advocate of making sure that people know it’s okay to talk about this and to talk openly about it.”

AFSP started the Out of the Darkness walk as a national campaign for communities, schools, and individuals to join throughout the year. Michele Lee, the AFSP associate area director for Eastern Massachusetts, said participants aim to raise awareness and support the organization, which works on research, education, policy advocacy, and emotional support for suicide survivors.

“Our materials this year for our campus walks specifically say ‘hope walks here,’” Lee said. “And I think that is the message that we’re trying to convey to anyone who takes part––the message of hope––and that there is support available out there, and that we are all in this together.”

Participants in the Emerson walk will trail a 30-minute circuit of Boston Common on April 6 starting at 11 a.m. Participants can register online before the walk to express their intent to participate. Anyone is welcome to join the walk with Emerson students either physically or virtually—people who are not able to attend the event can still create a profile on the website to fundraise for AFSP either in groups or in person with a fundraising goal.

Registration will start at 10 a.m. on the day of the walk at the Parkman Bandstand for attendees to check in and pick up free T-shirts if they raised over $100. There will be a DJ and performances from a capella group Noteworthy, of which Nadler is a member. Light breakfast will be provided for participants as well.

Along with Emerson, Boston University, Northeastern University, and University of Massachusetts Amherst will also host walks for their campuses on different days in April.

Nadler, who exceeded his personal goal of raising $100 by $72, said the chief fundraising goal for the Emerson walk is $20,000. With support from individuals and organizations—like the Active Minds, Alpha Phi Omega, and Zeta Phi Eta Alpha Chapter—the college walk has raised $1,940 by now. Last year, the Emerson organizers exceeded their goal of $12,000 before the date of the walk. Nadler said 150-200 people attended last year, and he expects more participants this year.

Participants can also choose to wear honor beads—complimentary colored necklaces distributed at registration—where each of the nine colors reflects the wearer’s connection with the cause and helps participants to identify their allies. For example, a green bead represents personal struggles with mental illnesses, while a blue bead means simply supporting suicide prevention.

Identifying himself with the colors of green, teal, blue, and purple, Nadler said the beads create a community of connection between walkers and acknowledges how mental illness and suicide affected them personally or indirectly.

“When you stop and you see how many other people are there, including some faces that maybe you’ve recognized at Emerson and you know their faces but you don’t necessarily know who they are,” Nadler said. “But all of a sudden, you see that there’s a common thread between you two. The impact it can have is powerful.”

Senior Amelia Wright, the top fundraiser who has raised $350 of her goal of $500, will participate in the walk for the third time. Wright captains Hidden Lantern, an art festival at Emerson that happens every semester and highlights people’s storytelling abilities of mental illness.

Wright, who struggles with bipolar disorder and self-harm, said she challenged herself this year to speak for those who don’t have a voice by sharing her story with people who might not understand the issue.

“I like telling people the truth about the ways that I’ve struggled, and helping them realize that this is not like … a damsel-in-distress thing,” Wright said. “It’s a real issue that a lot of people experience and struggle with.”

One of her friends attempted suicide last year, and Wright said that’s when she realized both the long-lasting impact mental illness can have on people and the support they need.

“People can be always still struggling and can always need support,” she said. “And I think that the work that [AFSP] does is incredibly helpful in educating people and providing people the resources that they need on a topic that is pretty stigmatized.”

Nadler said he hopes the event educates people about mental illness and breaks the stigma around it so people at Emerson feel comfortable starting conversations about it.

Wright and Nadler stressed that those struggling with mental illness are not alone. Wright added that one would be surprised to see how many people around them are willing to help them find the right resources once they have the perseverance to push through their boundaries and reach out for help.

“It’s not something that can be [as easy as] just asking for help,” Wright said. “It can be really hard and it takes a lot to get to that place. But it’s really important.”

Nadler said he encourages people to reach out to someone they trust no matter how isolated they feel in the journey.

“You will get out of it––it doesn’t look like there’s going to be an end to the darkness or whatever that you’re in,” Nadler said. “But I promise you, it always comes to an end, and there’s always a better day.”

Copy Managing Editor Monika Davis did not edit this article due to a conflict of interest.