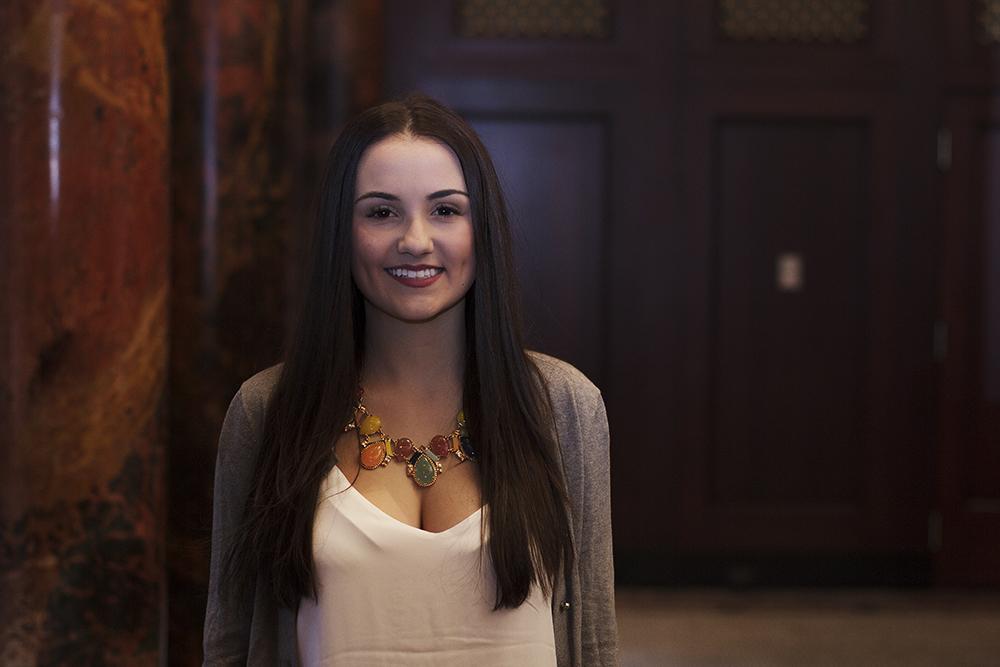 For freshman Gina Brazão, pageants—and their participants—are more rigorous than the common stereotypes would suggest.

“We’re smart, educated women who are ready to do good and make a difference in the world,” Brazão said.

Brazão, a journalism major, is competing in this year’s Miss Boston and Miss Cambridge pageant on Feb. 8, aiming to shed light on gender equality with her platform promoting the United Nations initiative He For She. She is the fifth Emerson student or alumna since 2012 to vie for the title of Miss Boston.

Brazão said she first considered the world of pageantry two years ago when she stopped her mother from throwing a National American Miss notification in the trash, thinking it looked interesting. One day during dinner last year, She said her brother first alerted her to the Miss Boston and Miss Cambridge competition. She entered, and although she didn’t win, she did eventually become Miss Blackstone Valley in Massachusetts.

“This is the most positive experience I’ve ever had in my life,” said Brazão. “It builds my confidence, keeps me focused on leading a healthy lifestyle, my journalism work, and my platform.”

With her platform, Brazão said she plans to speak with children and adults about gender equality and what it entails. She said she also hopes to open a He For She chapter at Emerson.

“As a chapter, we would work to create online and offline conversations,” said Brazão, “as well as plan fundraising events to educate others, and gain support with the fight for gender equality.”

Miss Boston and Miss Cambridge, who must be between the ages of 17 and 24, each earn a $1,500 academic scholarship, a prize package valued at $10,000, and a chance to promote their platform statewide.

“I don’t do this for the crown and the beauty,” Brazão said. “I do it because, at its core, it’s a great organization that’s huge on education and service – things that I believe in when I compete.”

The competition breaks down into five parts, said Dustin Rennells, the executive director of Miss Massachusetts: an impromptu answer to a question posed onstage; an interview with judges; a lifestyle, fitness, and swimwear portion—“it doesn’t matter what shape, size, or weight the woman is,” Rennells said, “as long as she makes it a point to express how important leading a healthy life is”; a talent demonstration; and an evening gown display.

“It’s a long process and there have been seven-hour rehearsal days for all of the five portions, but it’s exciting and fun,” Brazão said.

The two winning contestants go on to compete in Miss Massachusetts in June—a feat that Brazão said she would be happy to achieve. Other prizes include a year’s supply of items like Kind bars, travel luggage from Vera Bradley, and opportunities for public speaking and appearances.

Though Miss Boston is a competition, Brazão said it’s a collaborative, not cutthroat, experience.

“We all know why we’re there, but we also know we’re sharing the stage, so why make it a miserable experience?” said Brazão.

Rennells, said participants often develop deep friendships, even though they all know there can only be one winner.

“If you ask most women around here—and I know it sounds like the most cliché answer you’ll ever hear—it’s truly a sisterhood,” Rennells said. “There’s time for them to get to know each other through rehearsals and the group sleepover we hold before the competition.”

Pageant contestants are also often brought together by their shared interest in service, Brazão said.

“We make visits to the Children’s Miracle Network Hospital and help children who are in need, where little kids ask, ‘Are you a princess?’” Brazão said, referring to the Boston Children’s Hospital.

Even if Brazão doesn’t go home with the top prize, she said her work will still have been worthwhile.

“I think every young girl who may have an interest in it should look into it, not only for the work it does on behalf of education and nonprofits, but also because it builds confidence,” said Brazão. “It’s important for people to know that these contests aren’t just about the glitz and glamour, and that it’s truly a positive experience.”