Through Pictionary, president connects with students 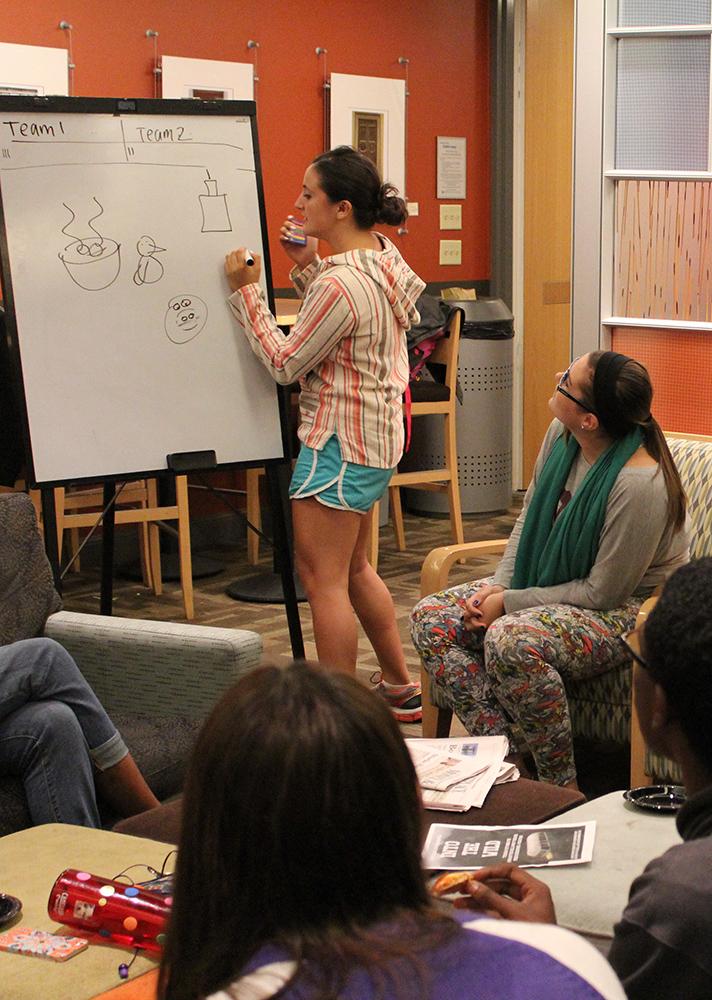 Last Tuesday, students walking by the Office Campus Student Lounge in Piano Row were greeted with an unusual sight. Passersby could find President M. Lee Pelton frantically doodling on a standing whiteboard for a crowd of students. A closer look would reveal the president was not writing notes—but rather drawing a fence, a house, and other items found in the game of Pictionary.

As part of his larger initiative to increase his interaction with students, Pelton reached out to resident directors to set up dorm visits. Taylor McMahon, a resident assistant in Piano Row, said putting together the Pictionary event was a group effort.

“President Pelton contacted us about going to the resident halls,” said the sophomore communication sciences and disorders major. “He wanted to get to know the students and talk to them. Specifically, the RAs in Piano Row worked together to make this event.”

The program drew in a crowd of 22, a mixture of students, resident directors, and RAs. The evening, a low-key gathering with snacks and games, was advertised by RAs throughout their buildings.

Danielle Mastronardi Fisette, a resident director in Piano Row, said the RAs landed on the idea of Pictionary because it was a collaborative activity.

“I think it’s important that the students have the opportunity to interact with the staff,” Mastronardi Fisette said. “They get to see a human side to the staff, and that can open more dialogue.”

After playing the game for an hour, Pelton spoke with the group for a half-hour, asking students for their opinions on Emerson’s marketing, fitness center hours, the new food service provider Sodexo, and the college’s plans for expansion. Pelton, who took notes while students spoke, said that he hopes to hold more events like this.

“I want to visit as many of the residence halls as possible,” Pelton said. “This was the first. We’ve started scheduling more events like this for throughout the year. I think it gives me the chance to learn some important things from the students.”

Mastronardi Fisette said she hoped that more events like this would occur, and that she was glad that Pelton reached out to her to create the event.

“He’s accomplished so much since he came here,” Mastronardi Fisette said. “He’s so sociable and invested in what the students want. I think this was a really beneficial event.”