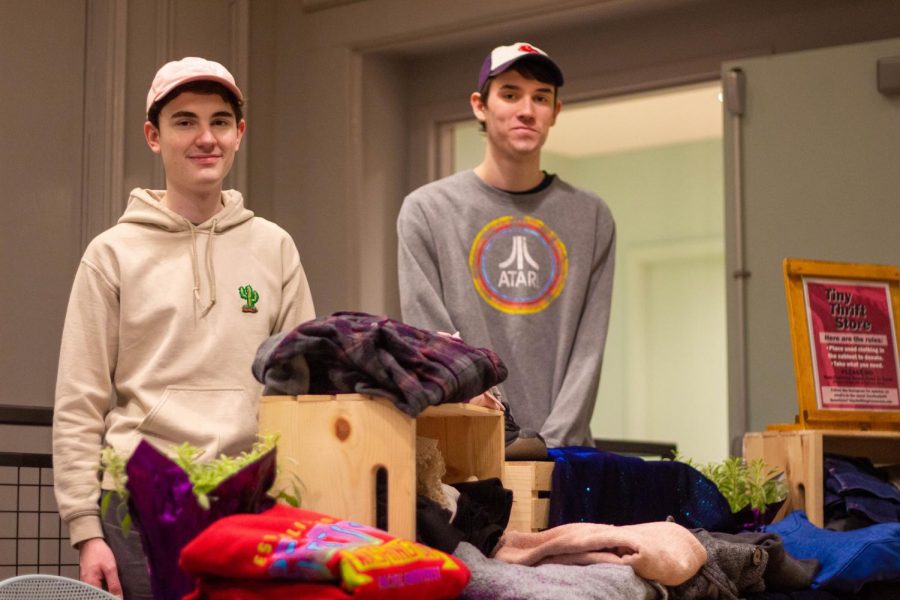 The Eco Ambassadors held their first Tiny Thrift Store Pop-Up on Feb. 11 in the Lion’s Den, marking the beginning of a string of monthly pop-ups.

The pop-ups will occur on the second Tuesday of every month from 3–5 p.m. in the Lion’s Den, where students will have the opportunity to donate unwanted clothes and pick up clothes they like. The pop-up serves as an extension to the Tiny Thrift Store by temporarily displaying its contents in the Lion’s Den.

There students were encouraged to drop off and pick up clothing items. The pop-up distributed an array of clothing, including colorful sweatshirts, mini-skirts, jeans, a formal dress, and a pair of black sneakers that were all shown on a table manned by Eco Ambassadors.

The next Tiny Thrift Store Pop-Up will take place on March 10.

The event was created to raise awareness of the Tiny Thrift Store’s existence. Eco Ambassador Ben French hosted the event and said he hoped to inspire students, faculty, and staff to participate in sustainable fashion free of cost.

“I think it’s important to have such an easy way for people that are as busy as Emerson students to have access to reused clothing,” French said in an interview. “Thrifting is the cheapest way to get clothes, and it’s the most environmentally friendly way to get clothes.”

“The best way to market things is to just bring it to the students,” French said. “So, it’s really just a classic marketing technique to get people excited about it.”

“We’re just kind of here, talking to people as they come up about fast fashion and the process of exchanging clothes,” Robisheaux said.

This semester is French’s last semester on campus as he plans to attend Emerson Los Angeles in the fall. He said he will pass the Tiny Thrift Store down to whoever is interested.

“I’ve learned that if you’re excited about a project, and you bring the idea to people, and if it’s something that you think will resonate with and matter to the community, people will also get excited about it and join in,” French said.