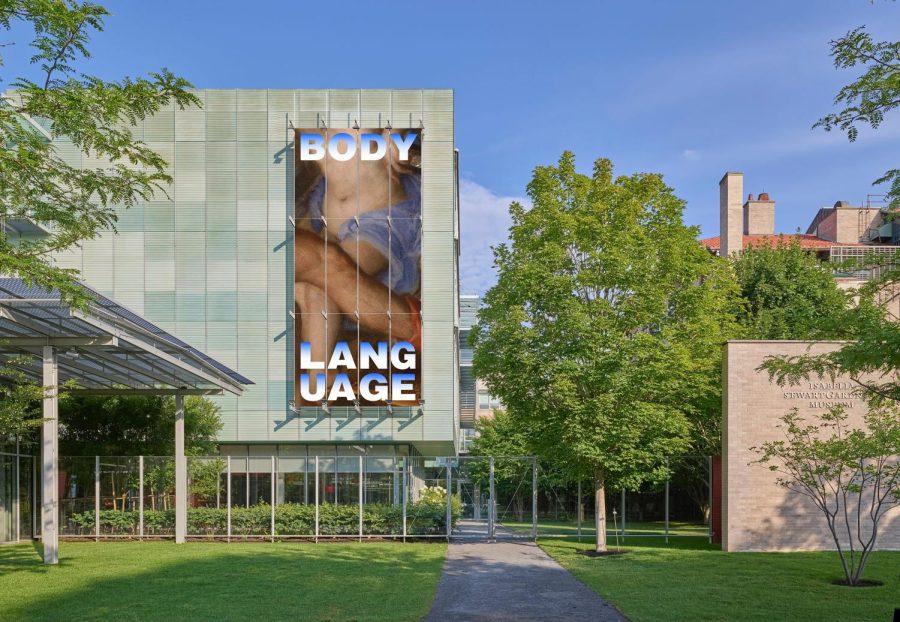 A new exhibition at The Isabella Stewart Gardner Museum, which opened on Aug. 12 and runs until Jan. 2, entitled Titian: Women, Myth, and Power, reunites six ancient paintings that have a dark and complicated personal history and lore.

The oil-on-canvas paintings are all made to depict Greco-Roman myths, featuring iconic characters like Jupiter, Diana, and Theseus. Nearly all the subjects are nude, and are etched upon six-by-six foot canvases in vivid color and truer-than-life detail.

The group of artworks are referred to as the poesie—a French word meaning “poetry paintings.” The paintings were named as such because each is based on a poem within the ancient Roman author Ovid’s most famous work, “Metamorphoses,” a 12,000 line epic poem chronicling his interpretation of the entire history of the world up until the assassination of Juilus Caesar. The collection was crafted by renowned renaissance artist Tiziano Vecelli, or as he’s better known, Titian.

The pieces were originally commissioned by King Phillip of Spain in 1550, and following his death, were separated from each other and scattered across Europe. One painting, however, was highly sought after by the famed Boston local art collector—Isabella Stewart Gardner. Thus, The Rape of Europa crossed the sea to the United States in 1896.

Piera Cavalchini, the esteemed Tom and Lisa Blumenthal Curator of Contemporary Art at the museum, explained the history of the piece at the Museum’s Creative Collision panel. The panel also featured two contemporary filmmakers whose work supplements the exhibition, as well as leading experts in the fields of art, mythology, and history.

“As the title suggests, the painting depicts the character Europa’s abduction and eventual rape,” Cavalchini said in the artist panel. “Titian’s other poesie, of which there are five, also called painted poems like the Rape of Europa, are all these big stories of sexual violence and coercion, themes not uncommon to Renaissance artists.”

In addition to the six poesie and two other 500-year-old portraits by Titian, the exhibition also showcases two contemporary pieces, which were made in response to Titian’s work.

“We share our founder Isabella Stuart Gardner’s commitment to the living artist, to contemporary artists,” Cavalchini said. “This season, we are engaging with artists who have influenced and who are influenced by the feminist movement and cultural critique, and who let their work challenge the portrayal and objectification of women and art and society.”

One contemporary response piece, Body Language, is a piece of digital graphic art by Barbara Kruger, a cutting-edge figure in the art world who specializes in collage, that rearranges details from Titian’s poem painting Diana and Actaeon to capture an obscured and sexually provocative moment in time. It was designed to stimulate thoughts and reconsiderations about power, sexuality, and submission. The image is installed on the Anne H. Fitzpatrick Façade on the outside wall of the Museum’s main entrance, covering the edifice in display screens.

The other response piece is a short film by internationally renowned filmmakers Mary Reid Kelley and Patrick Kelley. Their film is narrated by a more modern-looking version of Europa who is dressed in business wear, and snarkily addresses the audience between scenes.

Europa’s screen time is intercut with limericks detailing fables and folklore about mythological women from around the Mediterranean. The poems are worded in a peculiarly vulgar manner, and are recited over crude vaudevillian stage acts.

Mary Reid Kelley is a resident artist at the Isabella Stewart Gardner Museum who painted the film’s sets, wrote the poetry, and acted as the entire cast, among other artistic roles.

“One of our first impressions seeing the painting was that it was funny,” Mary Reid Kelley said. “There was a clear slapstick quality in the way that Europa is tumbling off the back [of the bull] and her skirts are flying up in a very Marilyn Monroe predicting way. The Cupids and the fish are kind of mimicking what she’s doing. And so it’s clearly fun. And then of course, the bull’s face, which is probably my favorite part of the painting, is just kind of looking at you like, ‘Did you get that?’ Like it was waiting for the laugh.”

For many who saw the film and others who attended the museum’s artists’ panel featuring the Kelley’s, this approach seemed to be a shocking transgression into the realm of humor and whimsy, given the dark story being played out in the source material.

The original tale, hailing from Ovid’s epic poem “Metamorphoses,” is the story of Europa’s rape at the hands of Zeus, the God of thunder and king of Gods. He transforms himself into a bull and urges Europa to climb onto his back. He abducts her and whisks her away to the island of Crete, where he reveals his true identity to her, and proceeds to assault her and leave her to bear three of his children.

Mary Reid Kelley made it clear that she and her partner understood the gravity and darkness of the tale that they were reinterpreting.

“She’s experiencing a real annihilation,” Mary Reid Kelley said. “To us there were those two facets: the being funny and also the acknowledging of the severity of the crime and the absolute destruction of the being.”

Patrick Kelley, a videographer by trade who helped on various production aspects of the piece, added his own thoughts on the matter at the Museum’s Creative Collision panel.

“When we say that we both saw this humor in the painting, we have to qualify that it’s humor with a patina,” Kelley said. “That patina, or at least for us, is knowing who the initial audience was. It was this closed audience of all men, painting men, painting for other men. We’re perceiving that sort of a one-layer-removed of humor in the sense that it was done with this inside joke which is fetishizing violence.”

At the panel, Jill Burke, a Professor of Renaissance Visual and Material Cultures at the University of Edinburgh, explained that although the history of the poesie’s original residence is shrouded in secrecy, much can be gathered from the surrounding context. This context is vital to understanding Titian’s thought process in crafting a series of paintings that leveraged humor against stories of brutal tragedy.

“We know they were in a small room,” Burke said. “They were for Philip and they would have been intended for him and some intimate friends at the Spanish court. Spain particularly had a lot of taboos against nakedness, and against female sexuality and representations of birth, more than other European countries. The generation after Philip II started to have reserved rooms. They were just for aristocrats, just for men, to see these images. These images were not at all intended for a general audience.”

King Philip’s viewing room, and others like it, were one of the only ways for Spanish men of the era to look at naked women—other than their wives—in a “dignified” context, according to Burke. They were, in essence, the equivalent of a pin-up magazine made for only the most chic 16th century aristocrats.

None of this is said to belittle the artistic value of Titian’s work, or of the exhibition at all, actually quite the opposite. Where Philip and his royal cronies ultimately failed to grasp the tragedies and complexities of Ovid’s tale and Europa’s trauma, Titian as well as the Kelley partners prevail spectacularly.

When the paintings are viewed in a way that looks past the surface beauty of the light, color, and the pure and naked bodies within, they are filled with a sort of eeriness, something that’s almost close to horror. It hides in the little details of all the pieces, in a way that can only be fully taken in when looking at the paintings in person at full size, standing around six feet high.

Mary Reid Kelley and Patrick Kelley’s film captures a similar unnerving property. It’s in the way that Europa stumbles around ruins, searching blindly for something while her eyes are covered by prop replica irises.

“With some types of assault and violence, it can take a long time to realize what’s happened,” Mary Reid Kelley said. “Certainly in cases like date rape or things that you think were ‘just an accident’ or a ‘misunderstanding’ and this is kind of how you’re coached to interpret it. So we see Europa basically piecing it together. That was kind of our way of acknowledging one common reality of assault.”

The pairing of the painting The Rape of Europa alongside the Kelleys’ masterfully bizarre film of the same name carried the power to make one feel truly disoriented, truly uncomfortable, and truly terrified.