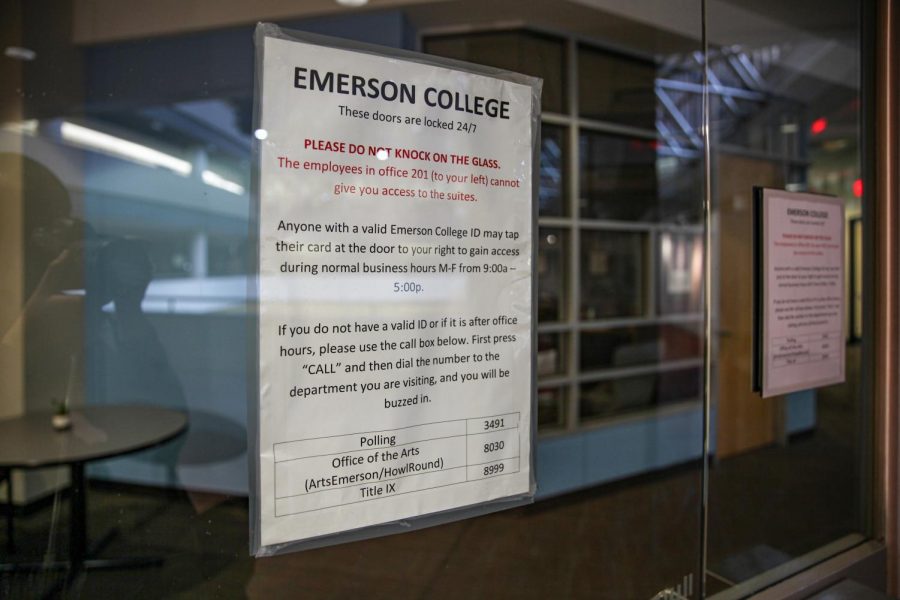 The outside of the Title IX office in the Massachusetts Transportation Building.

The Presidential Working Group that is responsible for reviewing Emerson’s sexual misconduct policy made minimal changes to its initial suggestions in a second draft of findings released ahead of Thanksgiving break.

The more notable findings in Wednesday’s draft could slightly alter the way Emerson approaches reported cases of sexual harassment, violence, stalking, and more—should President M. Lee Pelton choose to implement them at the end of the calendar year.

But the new draft, which has been in development since the initial findings were sent out in April, scales back the more actionable propositions that were first included. Many of those conclusions drew immediate rebukes from community members, who took issue with them for lack of favorable changes proposed and extended timelines, among other grievances.

Working group co-chair Jan Roberts-Breslin said in an October phone interview that the working group’s goal has always been to offer recommendations on Title IX policy to Pelton—not to alter the policy itself.

“It’s hard not to conflate the Title IX policy and that whole process with the working group, but our charge was not to rewrite the policy,” Roberts-Breslin said. “It was to look at student-to-student power based interpersonal violence, and the ecosystem or culture of that at Emerson.”

The reforms in Wednesday’s draft include a shift in the makeup of the proposed Standing Committee, which would be tasked with improving cross-department communication between offices that handle reports of sexual misconduct. It also suggests potentially moving the Office of Access, Equity, & Title IX out of the Social Justice Center, where it currently lives, as departments inevitably change over time. Other minor suggestions include references to the Power-Based Interpersonal Violence policy released in August and alterations in language.

The PWG now requests feedback on the second draft through an anonymous form and will hear public comments at a community forum webinar on Dec. 4 at 12:30 p.m. EST. From there, the PWG will make final revisions before sending their finished report to Pelton by the end of the calendar year.

Co-chairs Roberts-Breslin and Amy Ansell, Professor and Dean of Liberal Arts, declined to comment after releasing the second draft while the public comment period begins.

“Once the draft is opened to the community for comment we would like to not comment further so that the process can take its course during the feedback period,” Ansell wrote in an email.

Pelton organized the group to review the college’s Title IX policy in September 2019 after a list of more than a dozen students accused of sexual misconduct appeared on the side of the Little Building. A highly-criticized first draft was released by April of this year, after which the PWG agreed to create a revised draft.

Roberts-Breslin said in an email statement the PWG hoped to release their revised draft in the first week of November. The deadline was repeatedly pushed back while the group refined the draft.

This revised draft also follows the release of new Department of Education Title IX guidelines in May, which prompted Emerson to release their new Power-Based Interpersonal Violence policy in August. Authorized by Secretary of Education Betsy Devos, these federal changes overturned Obama-era policies that increased protections for those who report sexual misconduct. The federal Title IX policy is likely to be overturned again in the future, as President-elect Joe Biden recently vowed to bring a ‘quick end’ to Devos’ policies.

Within the second draft, the PWG stepped away from their previous suggestion to move the Title IX Office out of the Social Justice Center due to concerns of partiality, as the SJC takes a trauma-informed stance on handling sexual misconduct. This was one of the more controversial points of their first draft, as students and faculty said they had never heard concerns about the biases of the Title IX Office due to its location in the SJC prior to the PWG’s draft.

The PWG even acknowledged that this potential move is an unpopular proposition in the new draft: “Because of the possibility of a perceived misalignment between the mission of the Social Justice Center and the function of the Office of Access, Equity, & Title IX, there may be a time in future perhaps as the College evolves and organizational units shift, to consider an alternative reporting structure.”

The first draft also recommended the creation of a Standing Committee to “strengthen communication and cross-office collaboration with an eye to improving the student experience,” that they suggested be co-chaired by the Vice Presidents of Academic Affairs, Student Affairs, and the Social Justice Center. The new draft backs away from the recommendation of three co-Chairs, rather suggesting the Standing Committee consist of the Title IX Team and Liaisons formed by the PBIV policy in August, along with the Healing & Advocacy Collective and consultation with the General Counsel.

The suggestion that three prominent faculty members serve as co-Chairs of the Standing Committee was not included in the second draft—a significant change considering the vast influence these department officials have on the Emerson community.

It is also stated in the new draft that the VPs of Academic Affairs, Student Affairs, and the SJC should attend a Standing Committee meeting once a semester “with the specific role of reviewing what has been achieved and what remains.”

Additionally, the revised draft acknowledges that the new PBIV policy implemented three informal resolution options, which include enacting supportive measures (ex. issuing a No Contact Order), moderating a facilitated dialogue between parties involved, and acceptance of responsibility from the accused party.

The revised draft states that the Standing Committee should be tasked with providing more informal resolution options to parties involved, in addition to resolutions listed in the PBIV policy. They also reassert the idea that all relevant offices outside of Title IX and the SJC should play a more active role in implementing informal resolutions— another controversial proposition that raised concerns that student employees or faculty who do not have a background in Title IX could be asked to resolve reports of sexual misconduct.

Otherwise, the revised draft does not go in detail on how the PWG could impact student organizations handling of sexual misconduct.