To Ugg or not to Ugg? The ins and outs of fall fashion 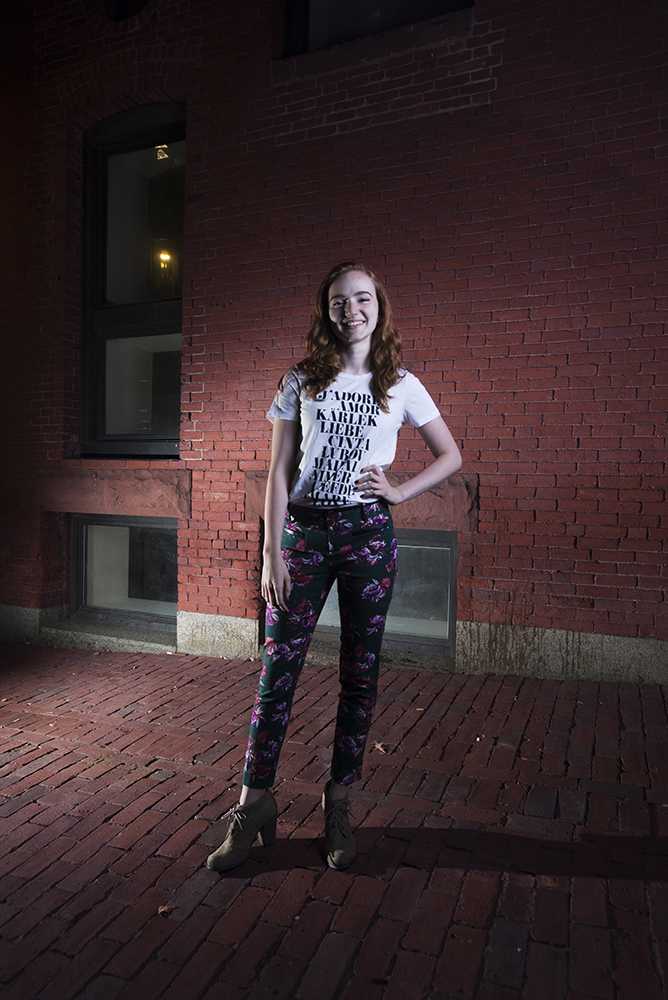 If there’s one fashion fad to be avoided this fall, sophomore Marty Miller says it would be Ugg boots.

“I really like the 90s,” Miller said. “I like oversized shirts and I take classic, basic pieces and put a twist on them.”

Describing his personal style as “classy with a twist,” Miller said he often sports classic jeans with a colored blazer, or oversized shirts with a collar neckpiece.

The vintage-with-a-dash-of-modern look is becoming an increasingly popular casual style. Oxfords and well-tailored slacks are a closet must-have, according to Cronin, a marketing communication major and Anthropologie sales associate.

“I think that a basic pair of really well-fitted, nice black pants—not just jeans, but more like a slack-style—is a major closet essential,” Cronin said, while wearing patterned slacks with a white graphic T-shirt.

Cronin, who said she is planning on starting a fashion blog soon, said style has always been important to her identity.

“I’ve wanted to dress myself since I was, like, three,” said Cronin. “[Fashion has] always been a really big part of how I define myself personally.”

Pairing vintage and modern looks isn’t the only mixing and matching that’s in style for the fall season. Designers like Fendi and Miu Miu brought garments with an athletic attitude to fashion week’s runways, featuring mesh fabrics and bold colors.

Cronin recommended incorporating bright, sporty accents with a mostly feminine outfit as a different take on the old neutral tones often featured in designers’ fall styles. She suggested pairing a girly dress with a varsity jacket, or even wearing a dress with converse or athletic shoes to balance the look of an ensemble.

“When you wear something really sporty, you definitely want to match it with something that maybe is a more feminine color or has ruffles or lace or something like that,” Cronin said. “Just so you get that contrast.”

Another major fall look, according to Miller and Cronin, is animal print and leather. Whether it’s a skirt with leather detailing or a belt with leopard print, Miller and Cronin said the fad is quickly becoming a fashion necessity for this season.

Leopard print was particularly favored in fashion week, making bold statements on the runways of Giorgio Armani, Celine, and Givenchy. Now, it’s near impossible to walk down the fall aisle of clothing stores like Forever 21 and H&M without seeing a variety of animal print.

However, both fashion experts advised wearers to be cautious of how they pair animal print garments with an overall look.

With the onset of so many new styles, older fall garments have been put on the backburner of the fashion world—in particular, out dated footwear like the tall boot.

Cronin said that the riding boot trend, after having been in style for over half a decade, has reached the end of its time.

“Unfortunately, I think the era of the knee-high boot is passing by.” Cronin said. “I have several pairs of knee-high boots I am afraid to say I won’t be wearing anymore.”

Cronin encouraged wearing shorter boots that are cropped below the ankle. Oxfords and different types of loafers have also become popular, further emphasizing the presence of classic formal styles in modern casual wear.

But Miller and Cronin emphasized that keeping an individual’s style personalized and genuine is priority. Cronin said new trends shouldn’t lead to abandoning an old fashion identity for a totally different one, but rather revamping last fall’s looks to enhance an original style instead.

“When you’re trying to figure out your personal style, just be you,” Cronin said. “That’s the most important thing.”