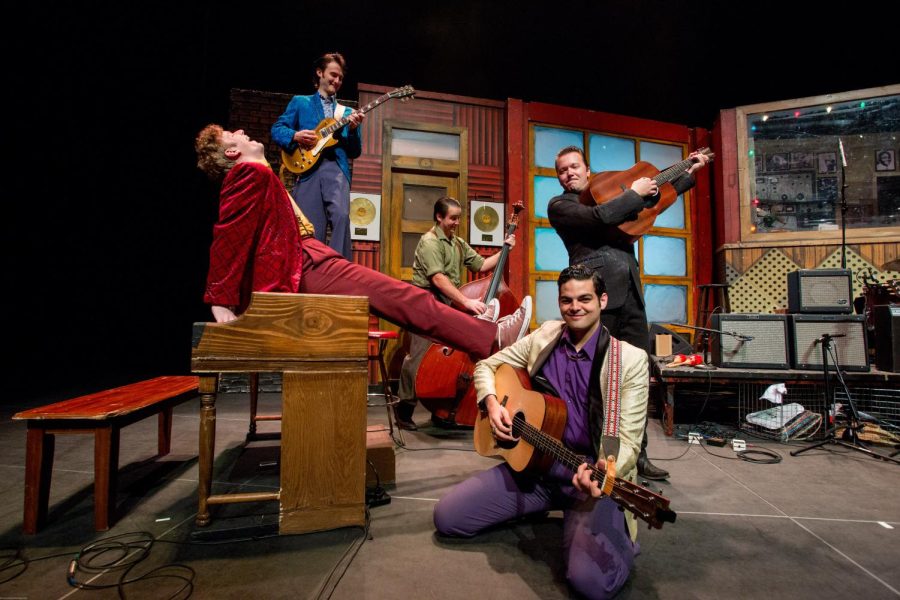 The main characters of the "Million Dollar Quartet."

The show follows the four musicians at Sun Records in Memphis, Tennessee during their historic collaboration, a one-time only event. Not many details are known to the public about the impromptu jam session, and questions still abound about whether or not Cash was actually present.

The “Million Dollar Quartet” moniker comes from Bob Johnson, the entertainment editor of the Memphis Press-Scimitar, who captured the real recording session alongside a photographer.

The jukebox musical aims to recapture the excitement and sounds of the day that four of the best musicians collaborated. It’s a landmark event for the rock ‘n’ roll genre that evolves 20th century pop-culture in mass media.

Various fans have given the show rave reviews, labeling it as “energetic entertainment” and “a terrific cast,” even influencing some to learn more about the story and get into the music genre.

In an interview with The Beacon, Trevor Dorner, who stars as Jerry Lee Lewis, said translating Lewis from a historical person to a stage character has been a unique and interesting experience.

“One of the most interesting parts about this show is that all of us are playing real people that really existed instead of just made of characters,” Dorner said. “The level of research we have available is astronomical. We have biographies, we have so much concert footage, videos, and things like that. It’s just such an interesting thing to replicate a real person that actually was alive. To look at their mannerisms and figure out ‘Ok, how did Jerry Lee play the piano? What weird, crazy stuff did he do?’”

The show aims to portray each real life figure as realistically as possible. Dorner said there are limits to what he can do because audience members want to see an accurate portrayal of the rock artists they grew up knowing and loving.

Mitchell Prescott, the show’s sound designer, said fans expecting to hear their favorite artists perform provides an added layer of pressure. They come to see and hear a recreation of their beloved artists’ music, which Prescott describes as a 90-minute rock show.

“There’s just a lot of energy in this cast, there’s a lot of fun music, and the cast is super talented,” he said. “I handle it from a rock show perspective and I make sure everyone can hear those famous vocals and famous lines that everyone knows so well, and make sure that when they’re leaving, they leave with a smile on their face.”

Head Carpenter Aurelia Lyman said the show’s music is important to recapture because of how well it stands the test of time.

“I never get sick of the music because it’s all fantastic music written by amazing musicians,” Lyman said. “It’s rarely a dull day. Even [with] other Tony winners, there’s a song that gets stuck in your head that really annoys you, but I’m never upset when this music gets stuck in my head for a day.”

Prescott listens to the room’s sound system to get a sense of what each seat in the house sounds like. Later on, they do a sound check with the band.

“No matter where someone is sitting in the theater, [it’s important] that everyone gets to hear the same show,” he said.

Dorner described his fellow castmates as a second family, and said they’ve grown extremely close after spending three weeks on a cramped bus.

“We’re all super excited to get back to playing music together,” Dorner said.