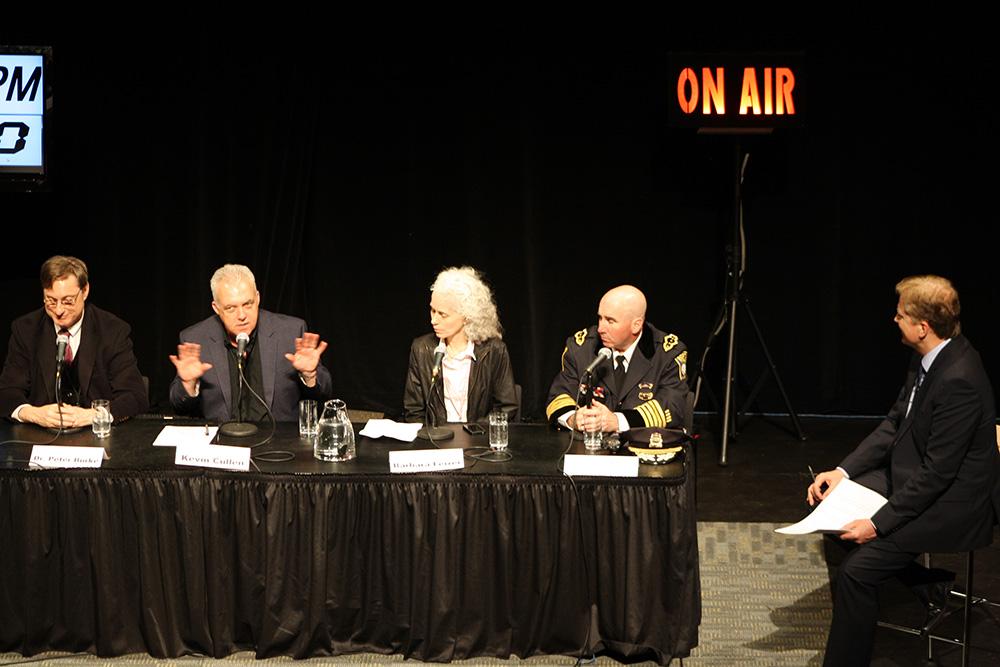 Nine days after the bombings at the Boston Marathon, a diverse array of community leaders came together in the Cutler Majestic Theatre to discuss how they were affected by the attack, and how the city might begin to heal.

Over 100 people gathered Wednesday night for “Boston After the Bombing: A Public Conversation of Hope and Healing,” a panel discussion presented by WBUR and The Boston Foundation.

The two-hour event was held in response to the April 15 explosions near Copley Square that killed three people and injured over 200, including eight Emerson students.

After hearing about experiences from those who were at the marathon in the first half of the discussion, participants spoke about issues that are still to come, such as the effect of the bombings on the Boston Islamic community and the trauma that citizens are still coping with.

The former piano teacher of Lu Lingzi, one of the victims who died in the attacks, provided musical accompaniment, with performances at the beginning, middle and end of the panel. The discussion was broadcasted live on WBUR as a part of the On Point program, a two-hour talk show about stories in the news and other interesting topics.

Tom Ashbrook, host of On Point and the panel event, said WBUR aimed to make sense of the tragedy through conversation.

“We thought it was time to begin to bring people together to try to make sense of what’s happened, to reflect on these dramatic events, to share our emotional responses, to share our hopes of what positives might come from this ultimately and try to start some healing,” Ashbrook said in an interview following the discussion.

There was a total of 11 panelists, which included Kevin Cullen, a columnist for The Boston Globe; Daniel Linsky, superintendent-in-chief of the Boston Police Department; Imam Suhaib Webb, a member of the Islamic Society of Boston Cultural Center; and Natalie Stavas, a marathon runner and a doctor at the Boston Children’s Hospital.

Stavas said she ran the marathon with her father, and a block away from the finish line, they were stopped by the police after they heard the explosion. She hopped the barricades and ran into the chaotic scene, administering CPR to a woman and tending to another with an injured groin and a man who needed a tourniquet, she said. However, Stavas said she has suffered from guilt since then.

“I tried. I tried to do the best I could,” she told the audience in a distressed tone. “I’ve had this guilt that I didn’t do enough. Those people were cheering for me.”

Linsky shared his experience and said he conducted the security sweep of Boylston Street that morning. Later on in the day, he said he supervised the emergency response and in doing so, became frustrated that he wasn’t able to help victims directly.

The Boston Police Department and first responders to the scene received mention and were praised by the panelists. This was followed by a standing ovation from the audience.

The second half of the event shifted  its focus toward dealing with the mental and social effects of the two bombings. Webb said he wanted to make clear that the Muslim community mourns with the city of Boston and is not associated with the extremist branch of the religion that investigators are considering as a motive for the attacks by the suspects.

“We see [the attacks] through your eyes,” he said, referring to the Muslim community.

Overall, the event was successful in starting the healing process, Ashbrook said.

“There was a wound here, but there was also a sense of fellow feeling in this hall and on this panel that I think will help me personally begin healing,” he said.