Traces asks, what would you leave behind? 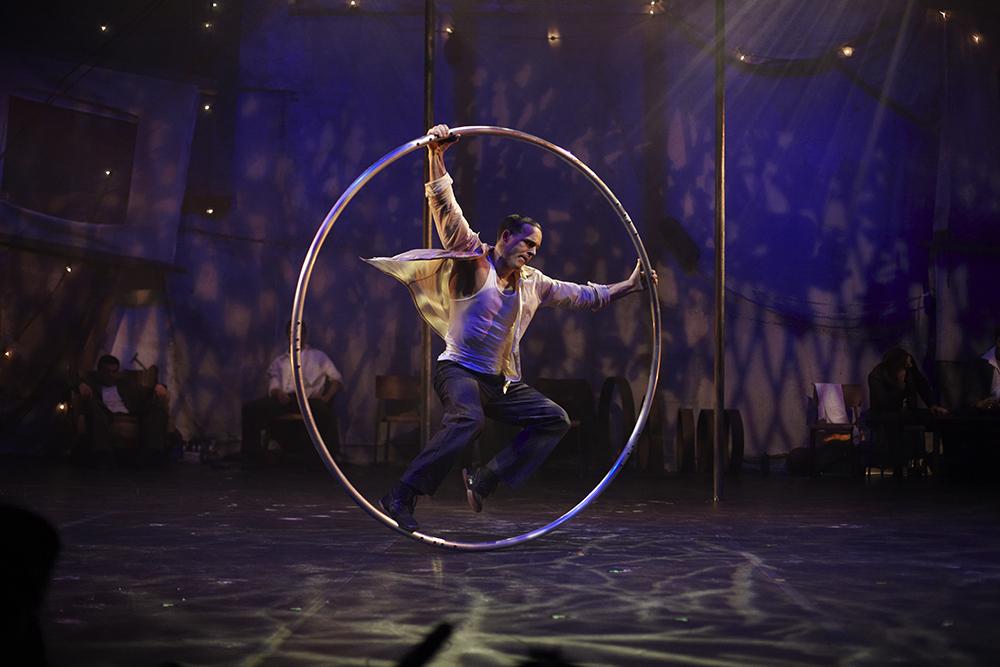 Traces is a kaleidoscope of various circus and street performance elements that revolve around one central question: if the world were to end tomorrow, what would you leave behind?

The show, which premiered Oct. 1 and runs through Oct. 12, is the first of ArtsEmerson’s 2014-2015 season. It takes place against the backdrop of a makeshift shelter in which seven artists cope with impending destruction through creativity.

Through traditional ground and aerial acrobatics, skateboard choreography, jumps, and Chinese pole stunts, the artists use their bodies to illustrate a collective pulsing pressure that arises from the acknowledgment of one’s last moments on Earth.

Traces emphasizes forging an intimate relationship with the audience through exposing the actors’ vulnerabilities. The performers introduce themselves with their full names, countries of origin, heights, weights, and three adjectives describing their personalities.

“I haven’t seen a lot of shows where you get to know the performers by their first names and know how they describe themselves,” said sophomore Stephanie Richards, who watched the show on its opening night and then again for its second performance. “Instantly I wanted to say hey, those are my characteristics too.”

Richards’ mother is American and her father is both Liberian and Ghanaian; coming from a mixed background, she said that it was refreshing to see the stories of multicultural performers come together on stage.

“Seeing a diverse cast reminded me of my [international] high school,” said Richards, a writing, literature, and publishing major. “You could see all the different interactions that can come about from having different childhoods and cultural backgrounds.”

Traces is performed by a Montreal-based theater company called Les 7 doigts de la main, which translates to “the seven fingers of the hand.” According to its website, the company’s goal is to combine distinct talents to create the “beautifully awkward dexterity of a seven-fingered hand.”

The show’s international cast lends itself to an eclectic performance that blends elements of multiple cultures, such as projected Chinese characters juxtaposed with classical European compositions played on the piano.

Meg Taintor, the administrative and student engagement coordinator of ArtsEmerson, said that seeking international companies is a key focus of ArtsEmerson’s program selection.

“We try to figure out diversity on this incredibly intricate matrix,” she said. “We’re looking at global diversity; we’re making sure that there’s different styles of work represented; we’re looking obviously for ethnic diversity among the cast but also for things like gender parody.”

Companies invited to ArtsEmerson reflect diversified talents as well. In Traces, the cast infuses the show with a spectrum of skin colors and foreign accents and, additionally, each individual displays skill in several artistic disciplines.

“[Marles] brought up that he initially had to try out a lot of different apparatuses and skills when he went to school for circus,” said Richards. “Having a broad range of skills is something they all highlighted as very important, and it’s something that I’m going to take to heart.”

Richards, among other students and faculty, sat down and talked to Marles and the rest of the cast on Friday, Oct. 3, when the acrobats gathered in the Randall Lobby of the Paramount Theater for ArtsEmerson’s first Brown Bag Lunch of 2014-2015 season.

According to Taintor, the lunches were created to fulfill a very specific need to create a forum where students could talk to visiting artists directly. Attendees bring their own lunches and sit down for casual, non-mediated conversations with international stars. Brown Bag lunches are open to the Emerson community for free.

Richards said she spoke with the cast because, as an aspiring acrobat herself, she is currently taking trapeze lessons and was inspired by the performance.

“There were a lot of intimate, sensual movements in it and I think telling a story through physical motion is pretty impressive,” she said. “It’s a whole new world of communication that we don’t see a lot.”

Developing an actor-audience relationship is an anchoring aspect of the show. Marles said that while on tour, the company often recites their introductions in the native language of the country they are performing in to further engage viewers.

Friday’s event brought the goal of intimacy from the stage to Emerson. It gave students a space to get to know the cast offstage.

“It’s sort of like an extension of the show,” said Marles. “I appreciate meeting people wherever we go and this enables us to leave our trace a bit more engrained.”