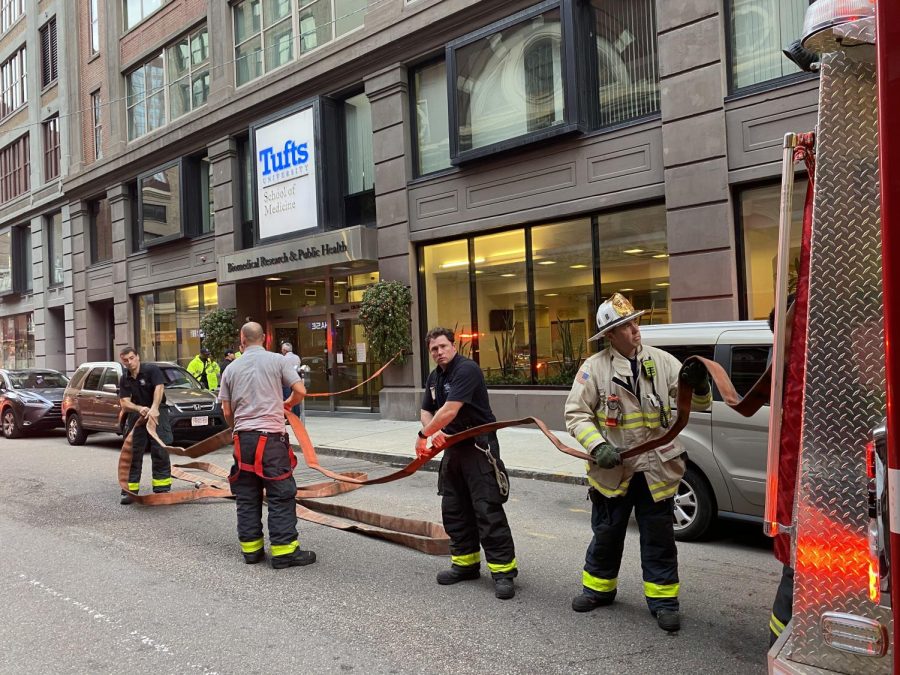 Firefighters put away the water hose.

Firefighters were sent to Tufts’ Biomedical Research and Public Health Building at 136 Harrison Ave. at 3:32 p.m. after an “unknown haze” was reported on the seventh floor of the building, the Boston Fire Department wrote on Twitter. Responders treated the event as a potential Level 2 hazmat situation, indicating the potential of “irritating, corrosive or flammable vapors.”

Officials later determined that the haze was caused by a fire in a walk-in refrigerator.

No illnesses or injuries were immediately reported due to the fire, the department said.

Firefighters sealed the refrigerator and, after running tests on the air quality, confirmed that no dangerous chemicals were present, the department said. As of 4:53 p.m., a Hazmat specialist was awaiting an environmental cleanup crew at the scene.

Maria Brouard, a first-year Ph. D. student at Tufts School of Medicine, said she was in a lab on the seventh floor preparing for an electrophysiology experiment when she was alarmed by a strong smell.

An email from the Tufts’ Office of Emergency Management warned Tufts community members to avoid the area due to “a chemical hazard.”

At 3:57 p.m. Emerson’s Associate Vice President for Campus Life and “COVID Lead” Erik Muurisepp sent an email stating that the emergency would close the testing center for the rest of the day.

Around 10 p.m. Tuesday night, Muurisepp confirmed that the testing center would be open as normal Wednesday.

The cause of the fire was unclear Tuesday evening.