Tuition Hikers’ Guide to the Galaxy 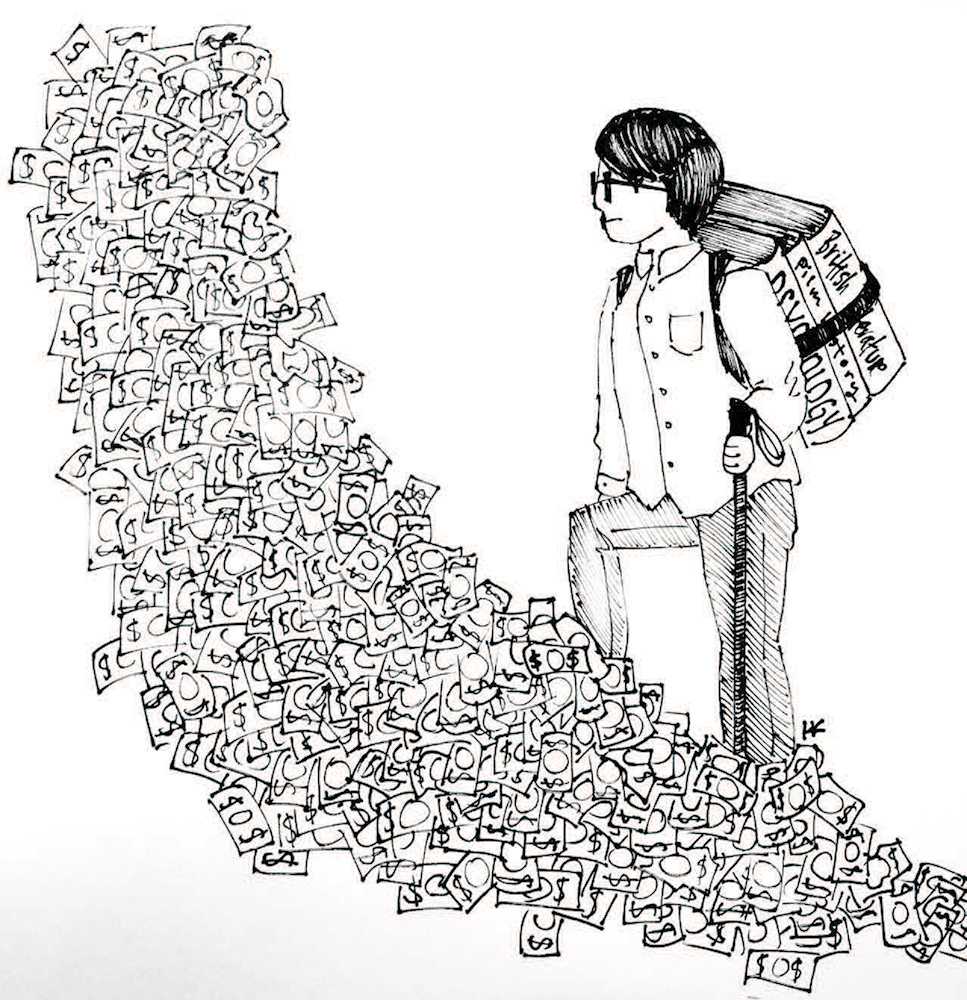 The end of the semester always seems to bring money to the forefront of my attention. The tuition fees for next semester, searching for a place to live off campus, and finding a job to be able to sustain myself while doing so have brought financial anxieties to an apex.

Money is a concern for me. I’m trying to graduate with little student loan debt, and last year’s 4.3 percent tuition hike made my situation more difficult. My financial aid remained mostly static in comparison, but I lost my federal work study program. No increased rate has been announced as of yet, but if it remains at 4.3 percent as it has for the past two years, students living on campus can expect to pay about $2,000 more than last year.

I’m not alone in this situation. There are many students attending Emerson for whom cost is a pressing issue. If I’m living outside my means to an extent, it is only because I think that I would be unable to find another university with the type and quality of education I’m looking for.

Striving to make education more affordable is a goal which is in everyone’s best interests to pursue. Student loan debt has consumed a massive percentage of the fiscal liability held nationwide. At 33%, it consumes more of the national deficit than credit card bills for the first time in history. The disparity between the inflation rate for college tuition and income inflation only helps to contribute to the expanding student loan bubble.

Emerson’s unique financial profile feeds into this. With an endowment of only $119 million, over 90 percent of the schools revenue consists of room and board, tuition, and fees. This disparity between enrollment and endowment funding makes Emerson the seventh worst school in Boston for financial aid according the this years Princeton Review.

The desire to find ways to make our institution more affordable should be within our school’s aims. President M.Lee Pelton has made diversity a buzzword on campus, and it’s a worthy goal to pursue, but as long as Emerson College is cost prohibitive, no meaningful diversity can really be created on campus.

Diversity means more than just racial variety. Diversity means having a multitude of perspectives. Having racial diversity on campus is an excellent goal to strive for, but we should also be striving to create socioeconomic diversity: The two go hand in hand. Part of the reason why Emerson isn’t a diverse campus is because our school is so cost prohibitive and so stingy with financial aid. If we can find ways to make education more affordable, we will see the profile of our school change. As long as we rank in the bottom percentiles for quality of financial aid, and as long as tuition continues to rise, creating this kind of diversity will be out of our grasp.

I’m sure it pains the leaders of our school to have to ask so much of the student body when it comes to tuition and housing costs, and it’s no easy situation to remedy.

Tuition caps work, but if this policy were implemented, a graduating class would pay a stagnant rate for all four years, but the cumulative rise in tuition would be passed down to the next class.

Thus, if you can pay tuition your first semester and your situation remains static, you should always be able to afford to go to school here. However, each year the cost of attending Emerson would spike to continue to fund operating costs.

There are no easy fixes, but there are many small ways in which costs can be mitigated in the short term. One way students can reel in their finances is to move off campus. By choosing to live off campus next year, in a modest but comfortable living situation, I estimate that I will be able to save about $6,500 per academic year (using a base rent and utilities at $615 per month, cost of transportation for three days of class a week, and the median cost of food)— more than enough to account for tuition hikes. If I had been able to do this my sophomore year, this would amount to over $19,500 in savings. Presently, students who feel they have a financial need to move off campus for their second year must petition the Dean of Students office to ask for a reprieve from the two-year rule.

I believe that lifting the burden of costs in this way should not have an application process. If students believes it’s within his or her best interest to save money by finding a more accommodating living situation, and if he or she feels comfortable living off campus, this should be possible. Enacting this policy would also allow for more upperclassmen to be able to choose an on-campus living situation if they prefer. Sophomores should be guaranteed housing, but they shouldn’t have to be forced into it if they’d rather give up the experience in exchange for savings.

Enacting such a policy would also help to remedy the shortage of on-campus housing for upperclassmen. By emptying rooms, more upperclassmen interested in living on Emerson’s grounds would be able to do so, which would create a more dynamic campus environment. This procedure would likely motivate juniors and seniors to consider living on campus again, while allowing students to take their finances into their own hands.