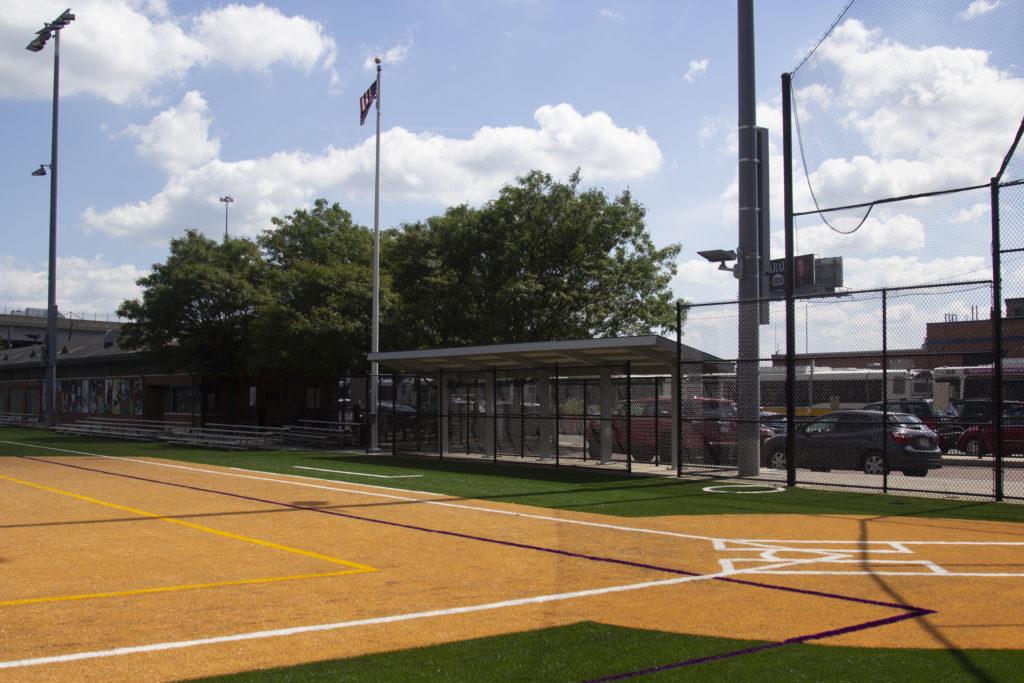 The softball diamond on Rotch Field now has dugouts for both teams. Photo: Kyle Bray/Beacon Staff.

Rotch Field—Emerson’s home venue for soccer, lacrosse, and softball—underwent renovations to improve the facility over the summer.

The renovations include a replacement of the field’s turf surface, the addition of dugouts for softball games, more bleachers for spectators, and new locker rooms.

Emerson’s Director of Athletics Patricia Nicol said the renovations are exciting for the entire athletic department.

“We have a facility that is on par with our [New England Women’s and Men’s Athletic Conference] competitors,” Nicol said. “I’m really happy for our athletes.”

The updated playing surface now includes a painted section of turf, or synthetic grass, that outlines the infield of a softball diamond, unlike the old turf which was entirely green. Nicol said the turf replacement was long overdue, as the old surface was nearly 13 years old.

Previously, the locker rooms at Rotch Field were comprised of benches with hooks, but they will now have a more modern appearance. They will contain custom-made, individualized lockers, along with new flooring that will feature the Emerson Lions logo in the center.

Now, the field also features five bleachers that allow more seating for spectators. In the past, Rotch Field had only one bleacher, leaving most fans on the turf.

Nicol said that adding more seating was important not only for the fans, but for the players too.

“It’s all about providing a great experience for our student athletes and our spectators,” Nicol said.

The men’s soccer team played the inaugural game on the newly renovated turf in their 3-0 loss against Pine Manor College on Aug. 31. According to the Emerson Lions website, 100 people attended.