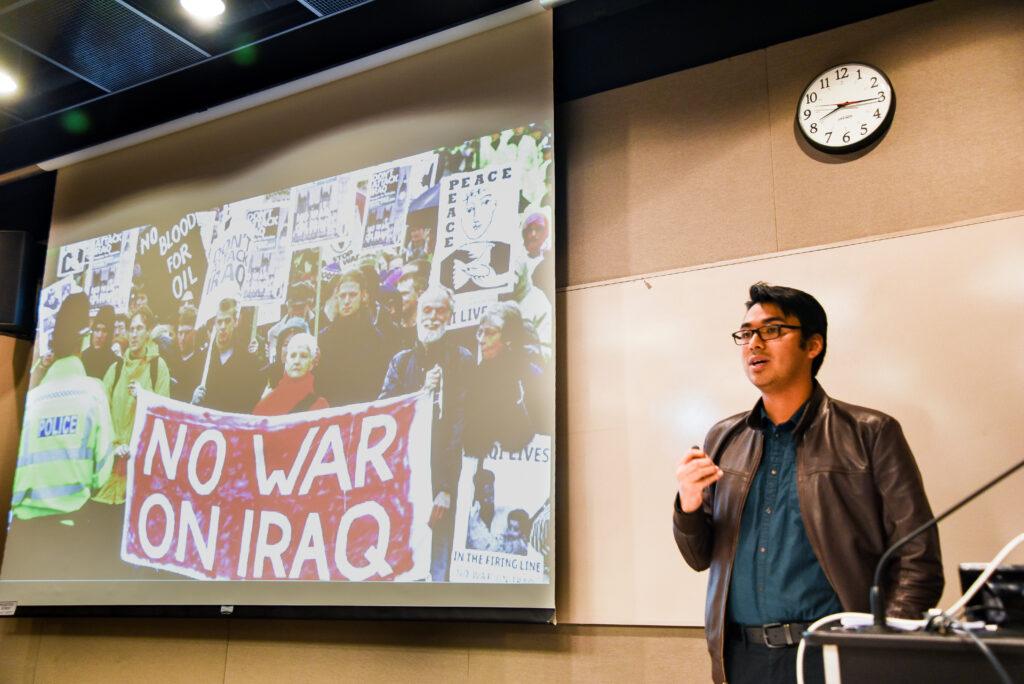 Emerson’s Turning Point chapter hosted libertarian speaker Gabriel Nadales Wednesday, who called for an open dialogue across the political aisle and a breakdown of the country’s left-wing “conservative caricature.”

Nadales detailed his own past involvement with the Antifa movement—an anti-fascist group—which he now criticizes for what he called their violent approach to political protest. He told the audience of 25 community members he believed college campuses, in particular, are suffering from a lack of dialogue between political ideologies, leading to conservative and libertarian students’ censorship.

“If we want to talk to the other side, we have to engage them not on political terms, but ask them questions about themselves,” Nadales said during the event. “Once we become friends with the other side, political disagreements don’t have to be the only thing that we talk about.”

Nadales asked audience members to raise their hands regarding their political affiliation at the beginning of the speech; many students identified as liberal. No students protested the event, which often occurs at other colleges that host conservative speakers, such as when students at Boston University protested against conservative speaker Ben Shapiro on Nov. 13.

Patty Tamayo, a sophomore political communication major who attended the event, said she was raised conservative but adopted more left-leaning beliefs as she grew older. She said she came to the event to hear Nadales speak about his own political transformation.

“If you follow any ideology by the textbook, it’s not that bad,” Tamayo said after the event. “The problem is the relationship people have with their ideologies. Right now, people are engaging in a very personal way with their ideologies where it’s very hard to listen to something and not feel like you’re being personally attacked. Because the attacks are being very personal.”

Turning Point USA is a conservative nonprofit organization with chapters at college campuses nationwide, including Harvard University and Boston College. Emerson’s chapter has about 30 members. Student Engagement and Leadership recognized the organization earlier this semester.

During the speech, Nadales described multiple times he was threatened or attacked by those with opposing political beliefs. He also said that earlier in the day an Emerson student had turned his back on him in the Dining Center after he told him he was there with the Turning Point organization.

“The [Turning Point] students invited me and they told me that they have experienced certain acts of liberal bias in the classroom … not just by other students, but by professors,” Nadales said in an interview after the event. “They thought that it would be a very receptive crowd.”

Joe DiRienzo, vice president of Emerson’s Turning Point chapter, said he believed a dialogue starts with humanizing both sides, and Nadales served as a positive representative of Turning Point’s mission.

“I think that people are generally open to dialogue; I don’t think Emerson is any different,” DiRienzo said in an interview after the event. “If you don’t have a face you can put onto the conservative or Republican [movement], then it’s definitely easy to keep in mind a vague caricature. But as soon as you start doing events like this and talking to people person-to-person, most people are willing to listen.”

Nadales agreed, saying his message was meant for those who disagreed with him as much as those who shared his beliefs.

“This speech is for conservatives because that’s the people who are likely to invite me,” Nadales said. “But I think that the people who should hear it are liberals who really want to engage the other side.”

Director of Student Engagement and Leadership Jason Meier said he believed the event hosted a positive exchange of viewpoints.

“I think it’s just important that we are able to peacefully allow groups to have events and espouse beliefs and share a conversation,” Meier said in an interview after the event. “I feel like today was a good start.”

Toward the end of the speech, Nadales said conservative students should continue voicing their beliefs despite the obstacles they feel prevent them from doing so.

“For those of you who have ever felt silenced, speak up,” he said during his speech. “Really speak up—because you have a duty to your ideas.”