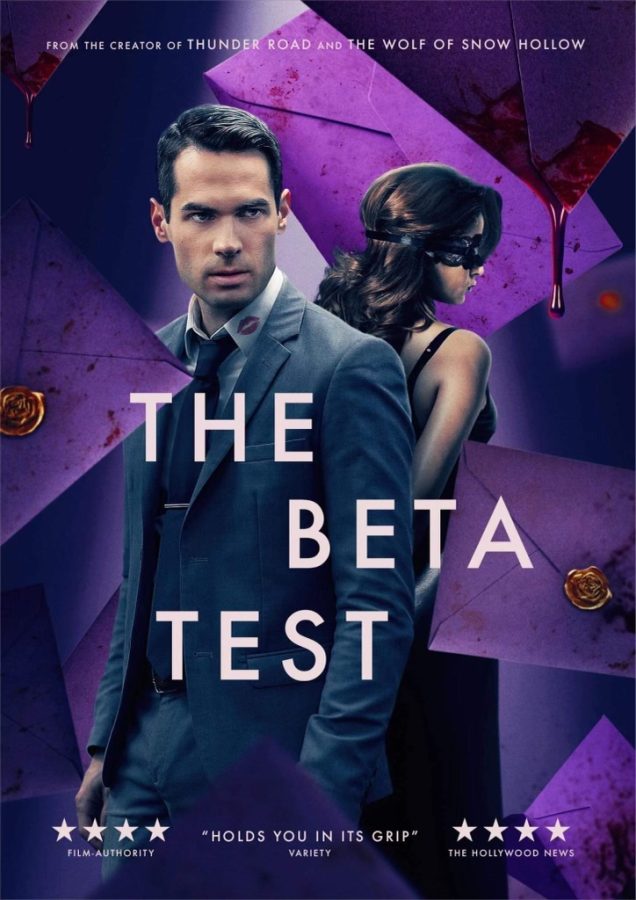 The flyer for "The Beta Test."

Twelve years after they graduated in the same class, two Emerson alumni and self-proclaimed “college drinking buddies” directed and starred in the new feature film “The Beta Test,” which premieres on Nov. 5 in select theaters and streaming platforms.

PJ McCabe ‘09, a theater major, and Jim Cummings ‘09, a film major, met in Little Building during their first year at Emerson. There, they formed a bond that has exceeded their four years together in college.

“We became friends freshman year and stayed good buddies all through school,” McCabe said. “After college, we formed more of a creative bond and started making stuff together, and slowly formed this writing partnership over the years that has escalated to what it is today.”

During one of their conversations in 2018, Cummings approached McCabe with a bizarre scenario that ended up becoming the plot for “The Beta Test.”

“It started when Jim called me one day with this weird thought about, ‘What if you got a letter in the mail inviting you to a no strings attached sexual encounter?’” McCabe said. “And I said, ‘That’s insane. I would never do it. What a weird question.’ But when I really thought about it and decided, wait, that’s interesting. Let’s talk about that.’”

From the one question Cummings posed to his friend, a movie plot slowly began to unfold before the pairs’ eyes. Over time, the two wrote what would eventually become “The Beta Test.” They describe the film as being “genre fluid,” a mix of drama, romance, and comedy.

“The movie is about a Hollywood talent agent who gets a letter in the mail inviting him to a no strings attached, blindfolded sexual encounter in a hotel room,” McCabe said. “It’s actually an amazing experience, but then he never gets another letter, and it drives him crazy. He goes down this rabbit hole to find the source of the letter which leads him to this weird world of data scraping, digital data, and a weird conspiracy going around Hollywood.”

Together, Cummings and McCabe wrote, directed, and starred in the film which took about four years to make. “The Beta Test” was funded by a crowd equity campaign, filmed in a local leasing office, and edited by Cummings in his garage.

The two have very different opinions on the process of playing so many roles in the creation of the film.

“It was every challenge,” Cummings said. “It was every possible challenge. You’re pretending to be Jackie Chan and writing and directing and choreographing and doing everything. You get no sleep, and you’re sprinting all the time to get everything done.”

McCabe begged to differ about the challenges of making the film.

“Honestly, no challenges really,” McCabe said. “It was great. It was kind of just like being on set with your buddy making a movie like in the Emerson days, just very relaxed. It went suspiciously well. There were never really any problems.”

The film has received raving reviews so far, with a 95 percent rating on Rotten Tomatoes and having been featured in film festivals such as Berlinale, Tribeca, and Deauville. In anticipation of the film’s official release on Friday, McCabe says he is grateful for the response so far and excited to see the audience reaction moving forward.

“It’s a really fun, cool story that I think a lot of audiences will like and connect with,” McCabe said. “I’m looking forward to getting a response, but luckily we’ve been getting an overwhelmingly positive review from critics which is incredible.”

As two alumni who started out by acting and creating short films in our very same halls, the pair hopes their film will teach current students about the importance of utilizing the tools available to them and producing work they are proud of.

“I hope this proves to the next generation of filmmakers that they can do it on their own, and they don’t need to listen to ‘the powers that be’ who tell them they can’t make a movie,” Cummings said. “Really, you all are the next generation of film. Make your movies to impress your heroes and not your teacher or classmates. Impress yourself. Try to make something that is undeniable.”

McCabe, on the other hand, hopes the film will teach students about the power of the “Emerson Mafia,” and encourages everyone to see the likelihood of working with current friends or classmates in the future. His friendship and partnership with Cummings is living proof of this sentiment.

“It’s your fellow students that are the most important thing you’re ever going to get out of Emerson,” he said. “These are the people you’re going to make lasting relationships with, learn to work with, and grow through experiences with. Don’t be afraid to make weird projects and try different things with different people because they are the ones you could be working with for the rest of your life.”