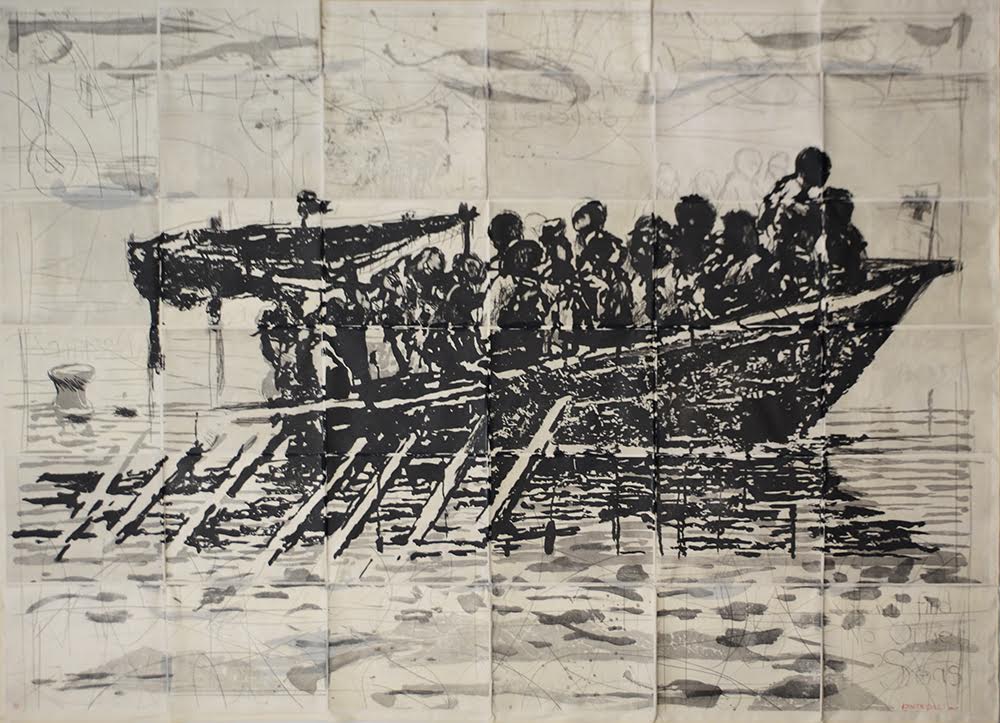 "Refugees (You Will Find No Other Seas)" is the focal point of the Urban Arts Gallery's new William Kentridge Exhibit. Photo: Courtesy of Joseph Ketner II.

On April 21, 2016, William Kentridge covered the Tiber embankment in Rome with six-foot-tall plastic stencils. He used powerful jets to spray the 550-yard section of the wall with water, washing away dirt on the wall to reveal depictions of Italian history.

The mural is part of the South African artist’s newest collection Triumphs and Laments, an exhibit created to reimagine Italian history. The Emerson Urban Arts Gallery will debut the collection Feb. 15 to April 14, according to Joseph Ketner II, Emerson’s distinguished curator-in-residence and co-curator of the exhibit.

“I believe [Kentridge] is one of the greatest living artists,” Ketner said.

The mural on the Tiber embankment depicts enormous scenes from the beginning of the country’s history until the present day refugee crisis. The gallery will show five-foot-long pieces of the stencil Kentridge used to create the mural.

Pamela Allara, a former professor at Brandeis University who co-curated the exhibit with Ketner, said the mural includes reimagined motifs from other art, such as generals riding wooden horses instead of real horses and prominent soldiers with their arms cut off. His other prints portray dying horses as a metaphor for destruction from war.

“[Kentridge] was really looking at the underside of Italian history,” said Allara. “Instead of telling a triumphant story, he wanted to look at some of the results of violence and of ignorance.”

Ketner said that many of the prints and drawings that will be displayed are heavily influenced by the refugee crisis in Italy. He said the focal piece of the exhibit is an ink print titled “Refugees (You Will Find No Other Seas).”

“This piece demonstrates how William is able to bring ideas of history and humanity to the present tense,” Ketner said.

The print shows refugees on a boat leaving northern Africa and arriving in Italy. This piece, like many others that will be showcased, arrived at the gallery folded like a box. Curators unfolded the canvases and mounted them on the wall without a frame. Kenter said the pieces look rough to represent the events that inspired them.

“Everything you see from William comes from the anti-apartheid movement,” Ketner said.

Before this collection, Kentridge worked as a resistance artist creating work in the 1980s that opposed apartheid in South Africa. His earlier prints and stop motion videos in the 1990s depicted themes of religious processionals, poverty, and war.

“His work has always had a political undercurrent without being necessarily explicit,” Allara said.

The pieces that will be displayed at Emerson were created at Artist Proof Studio and David Krut Studio, both located in Johannesburg, South Africa.

Ketner said Kentridge spends most of his time travelling the world and working on public art projects. The gallery is trying to coordinate a time for him to visit the exhibit, Ketner said. Kentridge could not be reached to comment on his work.

“Overall, the whole project is really asking us to say, ‘What do we think history is? … And what relationship do we have to it?’” Allara said.